A Super Snake For The Alternative Fuels Crowd 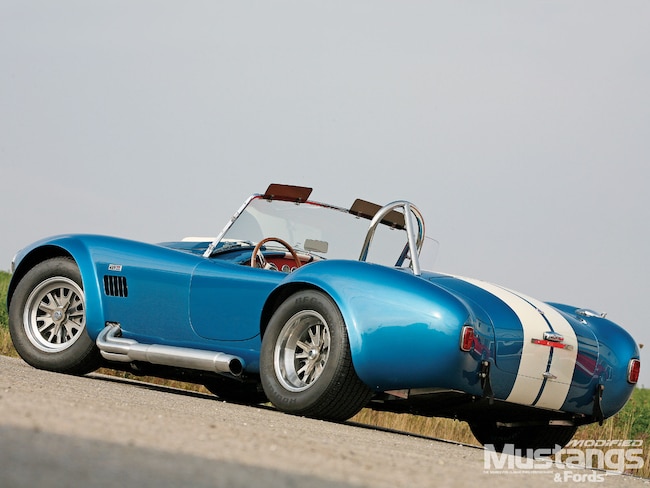 We won't keep you waiting: This custom-built, flex-fuel Shelby CSX4000-series Cobra produces a nice round 1,000 hp and 925 lb-ft of torque on E85-not bad for a mere 334 cubic inches of modern modular. And the fat-fendered little roadster weighs in at just 2,596 pounds, meaning that each alcohol horsepower is responsible for motivating less than 2.6 pounds. What we're trying to say is there are few words to adequately describe the out-and-out violence of its accelerative capabilities (though "lunatic" certainly springs to mind . . .).

The mad scientists behind this monstrous CSX project are from Sean Hyland Motorsport (SHM), a Canadian company that originally made a name for itself by being among the very first to hot-rod Ford's then-new modular family of engines back in the '90s. SHM was also the first authorized Shelby mod shop outside the United States, so when you combine those facts, it's easy to understand why it got the itch to see what a modified 5.4L Mustang GT500 powertrain-including its Tremec TR-6060 six-speed-could do in one of Shelby's venerable two-seaters. And so the surgery began.

Fans of the current GT500 will know that its Four-Valve 5.4L uses a cast-iron block which, while certainly strong, is maybe just a tad hefty, especially when the intended recipient is a lightweight roadster chassis (then again, an old-school 427 FE could hardly be considered a flyweight). No worries, though. SHM boss, Sean Hyland, simply replaced the ferrous block with his company's own aluminum version (PN SHMRB-2), knocking off about 100 pounds in the process. The stock supercharger was abandoned in favor of a Kenne Bell "Mammoth" twin-screw blower kit, displacing 2.8 liters of air with every revolution, while breathing through inlet hardware of unparalleled airflow capacity. To deal with the pressure, a stock GT500 steel crank was detailed and balanced in concert with forged Manley I-beam rods and 0.020-inch over JE 9:1 pistons. SHM's team then de-burred and performed a race-type valve job on a set of otherwise stock GT500 heads fitted with factory cams. Then all they had to do was fit the rather hulking assembly into the Cobra's waiting engine bay.

Actually, it wasn't the engine bay that was the problem, despite the imposing mass of the DOHC heads, not to mention the supercharger system's height requirements that were met with a slightly revised hood contour. Nope, the true challenge was in the tranny tunnel and firewall area, thanks to the substantial girth of the modular's bellhousing section. This required reworking the belly pan (this is a fiberglass CSX) to significantly widen the tunnel and, as a result, the pedal assembly was shifted about 4 inches outboard, making for a driving position that takes a little getting used to (nothing I couldn't get used to, however, if it meant having one of these things in my garage!).

Obviously, custom engine and transmission mounts had to be fabricated, as did a shifter, and a complete header system connecting exhaust ports to the stock CSX side pipes. The overall length of the powertrain resulted in a driveshaft that is only about a foot in length-a good 8 inches shorter, says Sean, than would be the case with a 427 FE, for example. In another comparison to an iron-block FE installation, the GT500 powertrain made for about 200 pounds less overall vehicle weight, and on SHM's scales, accounted for about a perfect 50/50 weight distribution. And though a stock-style oil pan might have been modified to work, Sean instead opted for a race-style, billet dry-sump system, with its reservoir tank housed in the trunk. Aside from providing greater ground clearance, the dry-sump setup frees up some additional horsepower because the crank isn't sloshing through oil, and also permits higher boost levels by eliminating any chance of detonation that would normally be caused by PCV-related oil vapors in the combustion chambers. 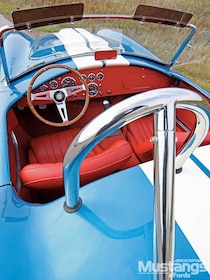 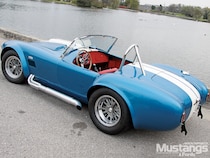 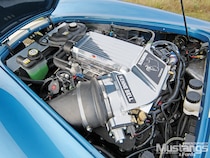 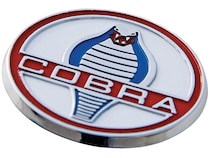 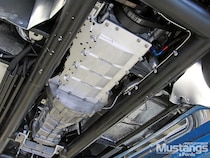 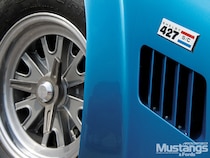 So let's talk about that boost. On E85, Sean is able to run as much as 23 psi, a result of both the alcohol's higher octane rating as well as its natural cylinder cooling tendencies. This results in the aforementioned 1,000 hp and 925 lb-ft on the brake dyno. In comparison, on 94-octane pump gas, boost must be limited to 18 pounds, knocking output back to a "mere" 805 hp and 740 lb-ft. Oh, the misery! Incidentally, a recalibrated GT500 processor is used to run everything, with suitable alterations to the wiring harness.

With the new powertrain up and running, attention then turned to the interior, which is more than a little brighter than any Cobra cockpit I've ever witnessed. "Regular" CSX carpeting just wouldn't fit, since the tunnel area required much modification and widening to accommodate the GT500 running gear. Between that and the fact that the car's initial role was to be as a show car in the 2008 SEMA show, SHM went whole hog with red leather upholstery and custom Wilton wool carpet. And though the shifter arm itself is a one-off fabrication, we like the Mustang-style knob and boot, which blend nicely with the whole powered-by-GT500 theme.

Chassis-wise, little is changed from regular CSX4000 hardware, aside from revised spring and damper (coilover) specs to complement the new drivetrain. At the back of that drivetrain is a CSX4000-standard Dana 44 axle-not the toughest rearend ever built, but, as Sean correctly points out, there's just no way to get enough traction to hurt it. And that pretty much sums up this beastly little project. With "only" around 500 hp, the original 427 Cobras had deserved reputations of being more than a handful to keep pointed in the right direction. With about double that power on tap when the 42-gallon fuel cell is topped with E85, SHM's Cobra has the irascible disposition a modern-day Super Snake with an alcohol addiction.