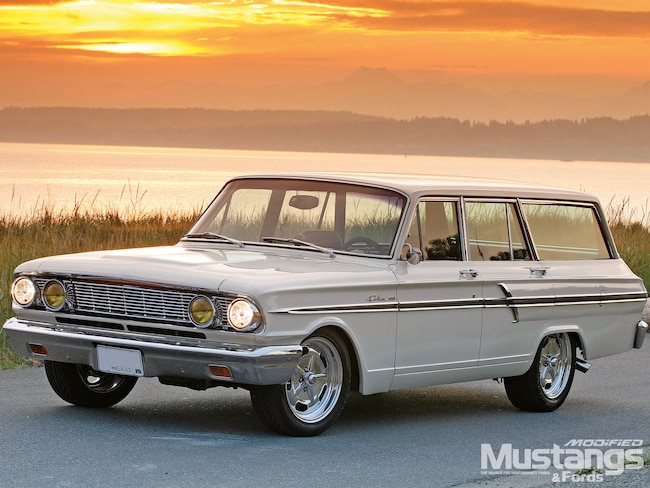 Larry And Debby Berkovich's '64 Fairlane Ranch Wagon With the debut of the first Ponycar, there's little doubt that 1964 will go down as one of the most significant years in Ford's history. Comparatively small was the role the mildly revised Fairlane played in the lineup that year, but in the end, it has transformed into one of the more popular platforms for Ford performance enthusiasts. Aided in no small measure by the legendary 427 Thunderbolts and to a lesser degree by a small number of K-code 289 models, the '64 Fairlane had plenty to offer the buying public-at least in two-door form.

While door count/body style has always played a major influence on desirability, the passing decades have seen a transition in the mindset-particularly amongst new cars.

From a '60s point of view, it's unbelievable that many of the highest performing imports shun a two-door design in favor of ones with four. As for wagons, well, the modern wagon (aka the SUV) appeal is virtually unprecedented, along with a penchant for customizing with aftermarket add-ons that were seldom considered back in the day. Can you imagine the original owner of a '60s wagon pimping their ride with flashy rolling stock or high-performance exhaust? Hardly. Wagons had a simple job to do, and they did it well. That they could be cool . . . well, few people gave it a fleeting thought.

At present, most will agree that the ball has yet to get rolling for classic four-doors, while attitudes toward wagons have clearly shifted to reflect the modern landscape. Count Snohomish, Washington's Larry and Debby Berkovich among the converts, for they've found the boxy platform to be about as compelling as any other model in the '64 Fairlane lineup. In the end, we figured Larry and Debby were more than capable of explaining the backdrop for the Ranch Wagon seen here, and thus give them the floor to spill the beans.

Larry explained, "I've had plenty of fun over the years with hard charging, barely streetable hipo Fords-a '64 T-bolt clone, Boss 302s and 429s, GT500s, and many others. My heart will always have a soft spot for those sorts, and yet when I saw this '64 wagon languishing by the side of the road one day, I was struck by what a great cruiser it would make. As a restoration shop owner, I've built many cars for customers, few for me, and virtually none that my wife could enjoy right alongside me. You know, while high-octane exhaust fumes, 11-second dragstrip passes, and smokin' the hides at will is loads of fun to me, it just doesn't do it for her. This '64 is for the two of us, and with the room, something we could pack up for the weekend should the urge develop. As well, I found great appeal in the wagon for being something different, something I wouldn't see twice or more if we went to the local cruise night or weekend show."

What started out as a plain-jane Wimbledon White Ranch Wagon, is obviously drop-dead gorgeous now. Credit goes to Larry and the rest of the gang at his business, West Coast Restoration, including Zac Thureson, Shawn Carlson, Randy Sargent, and Dave Mackey. Not surprisingly, Larry reports that finding resto parts for a '64 Fairlane-and wagon parts in particular, was a real challenge. "The toughest parts to find were the rubber seals that go around the rear opening of the car. In fact we never found them and had to have them custom made," explained Larry. "On the other hand, the NOS anodized tail panel virtually fell into my lap while I was looking for parts for a customer's car. Sometimes you get lucky." 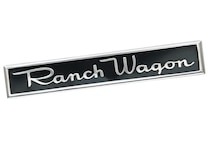 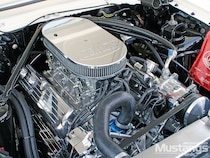 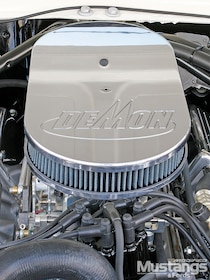 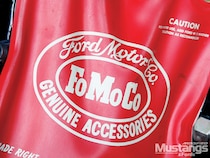 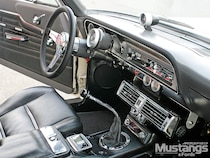 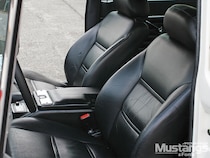 Debby further added, "I grew up riding around in a '67 Olds Vista Cruiser, so the feel of the Ranch Wagon conjures up plenty of good memories for me. My sister and I shared the Olds for several years right after high school, though needless to say, it was nothing like this. I wouldn't have been able to fathom having leather seats, much less heated ones back then, but believe me, they're what I probably like best in terms of the actual hardware that the guys assembled into the car. Of course the air conditioning and stereo are closerunner-ups. Over the years I've tried to rein Larry in on some of his "projects," but on this one, I'm glad he didn't listen to me!"

Notice that Debby's comments don't draw in the high-performance attributes of the wagon-items like the warmed-up 5.0L roller engine with Barry Grant SixShooter induction, the Tremec five-speed trans, or the 3.80 geared 8-inch rearend assembled by Randy's Ring and Pinion. No matter, Larry and Debby have obviously found middle ground on a car they plan to drive cross country one of these days. He says he loves the car, and so does she. Who could ask for anything more?