Training A Wild Falcon To Hunt Small Game Is Not Easy; Turning Ford's Example Into A Show Winner Isn't Either 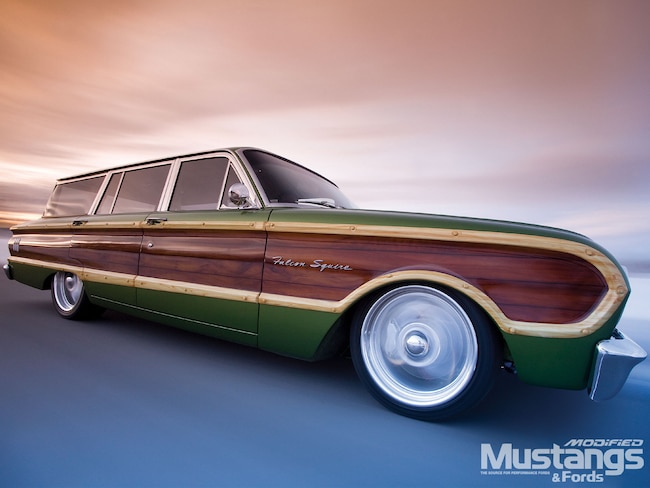 Jay and Jeff Page's '63 Falcon Squire Wagon
In the ancient sport of Falconry, the chicks are taken from their nest at birth and trained to hunt down smaller birds, then leave them unmolested before they head back to perch on their respected master's leather glove. Falconry is illegal in the U.S. though, so it isn't the most popular pastime. Ford Falcons on the other hand, at least judging by the reaction to this car on the street and at shows, are immensely popular. Although a lot of the popularity of this model may be attributed to what's been done to it after Jay C. Page and his son got a hold of it. "I wanted to do a restomod on the car," said the elder Page. "But my son, Jeff, who built the car, wanted to do a custom pro-touring car. We talked about it until we found the 427 IR Roush engine and it's all history from there."

Well the history of the build is not all that brief and neither is that of the original Falcon itself. Built from 1960 through 1970, the Falcon had enough room to seat six but with its 144ci straight-six, it was meant to be more economical than the gas-guzzling behemoths of the '50s. As a recession (sound familiar?) hit in the early '60s the Falcon proved an immediate success with its claimed 32.68 mpg. In case you're not tired of fun facts yet, you should know that the Falcon continues to be produced in Australia and sold more than 3,000,000 units in 2003, partly because their four-door platform is ideal for police cars and taxis.

The Falcon came to fruition in nearly all forms of vehicles from four-door wagons to convertibles to sedan deliveries. The one you see before you is of course the former and a Squire model on top of that, making this barn find even rarer. Although it actually wasn't found in a barn, it was found between them. "I found the car stuck between two barns in Central Utah," said the senior Page (Jay and his son hail from Salt Lake City).

Acquiring ownership of the pinned peregrine eluded Jay for nearly five years until one day he paid a visit and found that the owner had passed away. Disappointment racked Jay's gut as the wife of the owner told him she had sold it for 50 bucks to a guy for use in a demolition derby. That same disappointment disappeared when she said he had not come to retrieve it.

"I asked if she still had the title. She said she did. I took out my emergency $100 bill and the title was in my hands," said Page senior. "We picked up the car the next day and brought it to my son's shop." This is when the Falcon became more of a father and son project. Jeff, Jay's son runs Discovery Collision and Painting in Salt Lake City. "When I found the car it was all original and most of the paint was faded down to the primer," said Page senior. "There were no large dents or body rust except for a few spots in the floor." While this would be a ground up restoration, the first area to get attention was the body. Jeff got to work on a number of changes to the front bumper including removal of the turn signals, shaving visible hardware, and adding driving lights. The rear end saw the same type of action with modifications that included shaving more hardware, adding through-the-bumper exhaust tips, and more.

Other than these aforementioned modifications at both ends the body was left stock. One part of the body that distinguishes the Squire from other Falcons is the wood trim running down the sides. This distinctive element seems to catch everyone's attention while providing a great contrast to the "That's it!" custom BASF green. A lot of time and effort went to getting the factory fiberglass wood trim to fit the car and look correct. In fact, the Pages even outsourced the paint to the middle of the Pacific to Dennis Mathewson of Cosmic Airbrush. 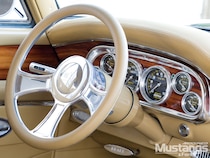 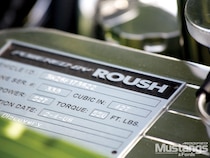 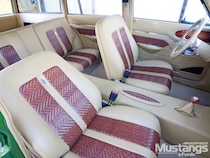 "We were looking for someone to paint the wood on the sides and Dennis was the best out there," said Jeff. "We went on a cruise in Hawaii and went to his shop. When we told him about the Falcon he was very excited and ended up coming to Salt Lake where we got it prepped for him to paint. Then I cleared and candied all the airbrushed wood."

Once they acquired the 527hp Roush engine, Jeff went about designing and building the frame and suspension that would work best with that amount of power. This was done utilizing an amalgamation of parts from an Art Morrison frame and Air Ride suspension. The rear is a canted four-bar setup, while the front is a Mustang II-style manufactured by Rod & Custom Motorsports.

The interior may have been last but it is definitely not the least. The cabin is ensconced in tan Porsche leather. The carpet is the same color but a different German marque, Mercedes. Take a look in the cabin and you see the surfboard cutout etched into the headliner with leather accents. The seats are Ford Taurus SHO six-way power adjustable. The icing on the cake is the Billet Specialties steering wheel and the dash swathed in leather from, you guessed it, Porsche. If the Pages had to cross over to another brand for various items this has to be the best one.

Jay and Jeff Page have taken this once dilapidated barn find and turned it into nothing less than queen of the sky. Like two great Falconers, they turned this once pinned peregrine into a phenomenal Falcon worthy of the numerous accolades, attention, and praise it receives. But don't let this one fly off. With 427 cubic inches, 527hp and 550 lb-ft of torque under the hood it may never come back.