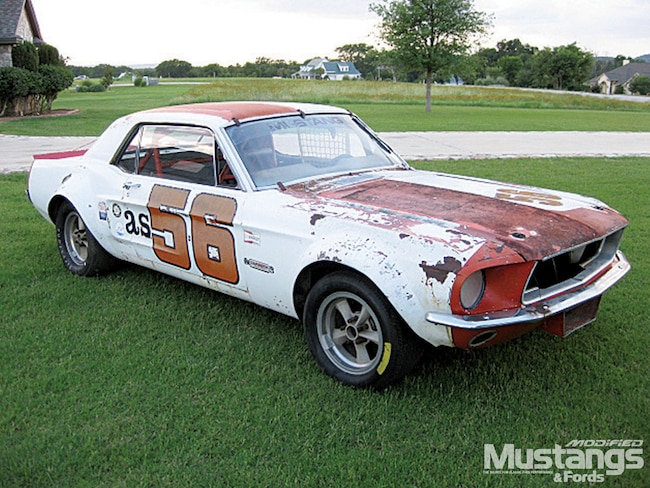 Trac Stephenson was more than a little intrigued with a phone call from Kansas to his "427 Legends" dealership in Marble Falls, Texas (www.legendarymotorsport.com). The man on the other end of the line was Darel Brewer. He wanted to trade a '67 Trans Am Mustang for a new GT40 replica Trac had on the sales floor. "New" to his customers are continuation GT40s, Daytona Coupes, and Cobras. A Shelby aficionado, he also owns and deals in the classics. As a result, Stephenson was well aware of the heritage, rarity, and value of this '67 Mustang. "It is basically an R-model," Trac said. He referred to R as in race. "The car needed a total restoration, but I jumped all over it."

Trading emails back and forth with pictures, Trac cast his eyes upon what was essentially an old hulk that had been sitting outside for an indeterminate amount of time. Apparently, the car sat outside in Georgia for years in the possession of Curtis Jackson before coming to Kansas. Trac told us the '67 was one of 26 coupes Shelby built to race. He believed only 8 or 10 were known left to exist. "He ended up buying my GT40 and I got his race car. I was getting ready to restore it when the original owner called me."

Fred Southerland bought this '67 brand-new from Carroll Shelby in 1967. The 78-year-old remembers the purchase well. He approached Mr. Shelby about donating a door prize to his race drivers' association, of which Carroll consented. However, in the process he sold Fred the '67 Mustang race car. The 1967 season was about to kick off. Ford swung its racing budget to Mercury, fresh out of the gate with a new Cougar, but Shelby didn't back down. His Terlingua racing team won the Trans-Am series for Mustang in 1966. He built a '67 coupe for Trans-Am and got together some budget money from Ray Geddes at Ford. For the record, Shelby won the championship for Mustang again that year.

Actually, these specially prepared racing coupes were not offered to the public. Fred recalls Shelby said he had one Mustang left. Fred paid the $4,000 and entered his '67 in SCCA A-production, not Trans-Am. Wearing the number 63, his coupe actually won the A-sedan "pre-race" for sports cars at the Times Grand Prix at Riverside. He competed against the likes of Cobras and Corvettes. "I won that race. So I was pretty happy with that, running 37s out there." Thirty-sevens refers to one minute thirty-seven seconds around Riverside, a benchmark for fast sports cars of that era. Fred felt he would "smoke everybody" at Daytona, but had to start in last place and finished Second.

In 1968 he sold the '67 Mustang and lost track of the car until recently. One of the prospective buyers was researching the history and contacted the original owner and driver-Fred. Fred had old pictures and could verify the car's heritage. The man told Fred he was going to pay "six figures" for that car. Instead, Trac got the '67 race car on trade.

Fred, who was doing a little research of his own, and dreaming of owning his old race car once again, found out and called Trac. Was the car for sale? Indeed it was. Fred had researched prices and found another '67 Trans Am Mustang that didn't have the same provenance as his old car for $450,000. Therefore, Fred felt his purchase price of $135,000 wasn't frivolous for the condition his car was now in. Plus, he would get his old race car back. What a kick would that be?

I would say the purchase is amazing considering in 1967 he got a brand-new car, turnkey ready to race for $4,000. In 2009, he got basically an "old hulk" for more than 33 times the original price. It did have the original driver's racing bucket seat and the Ford Top Loader four-speed. As we go to press, a shop is sandblasting the body for the start of what Fred terms "a very serious restoration." He plans to race the car at the Monterey Historic Races this coming August.

Send your feedback to heasley@sorc.com