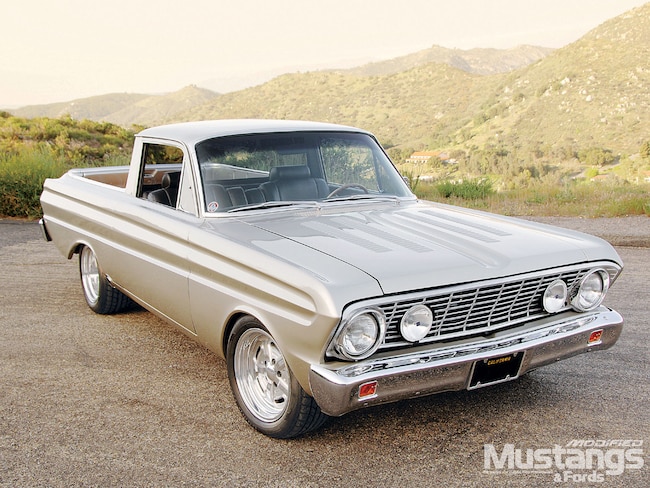 Sondra Gorman's '64 Ranchero
It was a great bunch of friends that prompted Rich Gorman to buy the '64 Ranchero that was spotted unattended, in someone's garage. Judging from the quality of the '65 Shelby Mustang that Gorman restored himself, these guys knew the Ranchero couldn't be in better hands. Gorman didn't disappoint them once he got to tearing apart and rebuilding the Ranchero to its current condition. At first, it looks like a classic custom, but as you inspect it closer, you begin to see some modern components that make it faster, reliable and most importantly, very cool.

With a powerful 302ci V-8 under the hood, Gorman's finishing touch to the Ranchero was to swap out the single four-barrel carburetor for a set of four Weber side-draft units. "Unfortunately, Rich lost his ongoing battle with pancreatic cancer, and was unable to add that finishing touch himself," says Gorman's wife Sondra. Rich Gorman passed away in January 2009, but the same group of friends that prompted Gorman to buy the Ranchero, rallied to take the vehicle to J. Bittle of JBA Performance Center in San Diego, California, to see that the rest of the vehicle got finished in his honor. "We pitched in and installed the four Weber No. 45 side-draft carburetors, built the custom linkage for the Moon manifold, and delivered it to Sondra, who wanted to see the Ranchero finished the way he would have wanted it," says J. Bittle. "Rich Gorman was a good friend, a Ford enthusiast, and a great law enforcement officer, who had many funny and interesting stories to tell." For Sondra, it was an amazing experience to see how many people actually cared for Rich and went out of their way to see that the Weber carbs finally got installed.

This life-changing turn of events left Sondra Gorman with a wonderful vehicle that she loves and that truly expresses the talent that Rich had as a Ford enthusiast. His handiwork demonstrates the many modifications to the body and suspension that make this Ranchero fast, unique, and something to be admired. In his efforts, Gorman managed to retain the vehicle's classic identity in the process. He kept the body stock in appearance, but added some new tricks to the Ranchero, such as shaving the door handles, trim, and adding an electronic keyless entry system. After smoothing out the factory sheetmetal and adding louvers to the hood, a few coats of DuPont Mercedes Champagne Metallic paint gave the vehicle a modern tint to its classic design. In keeping with the vehicle's clean appearance the factory bumpers were re-chromed and the original grille restored; but not without a touch of modern technology. Gorman incorporated new halogen Hella lights that replaced the old factory headlights and driving lights.

Looking at the Ranchero now, there's no doubt that this vehicle's parts hauling days are long gone, as it proudly wears a frenched third-brake light on the tailgate as a crown of its rebirth. Furthermore, the highly polished stainless trim around the bed creates a frame for the stained and varnished wood kit and smooth sheetmetal that indicates this baby is pampered.

While the Ranchero may now be Sondra Gorman's prized possession, Rich's original intent was to drive it to shows and ultimately, get to its destination in comfort. Therefore the factory suspension was swapped out for a more comfortable and adjustable Air Ride Suspension unit. While it's cool that the vehicle can be easily raised or lowered with a touch of an in-cab control panel, the true nature of the swap allows the Ranchero to be driven aggressively in a corner or in a straight line when called upon to show its muscle. For now, the new suspension allows the use of Budnik billet aluminum wheels and Goodyear rubber to nicely fill out the wheel wells and grab some much needed traction. The suspension was also further enhanced with a Unique Performance rack-and-pinion steering unit up front and a 9-inch rear out of a Lincoln Versailles out back. 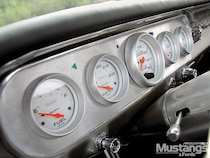 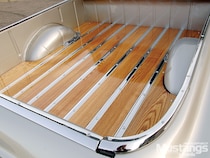 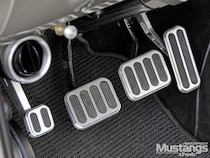 With the suspension upgraded to the performance category, Gorman realized that the factory brake system wouldn't be sufficient to stop the Ranchero at speed. So he upgraded it to a set of Wilwood four-piston calipers up front, and Wilwood two-piston rear calipers, matching them with a set of performance slotted rotors. With custom-built brake lines and a CNC dual master cylinder, the Ranchero was now ready to meet the requirements for a true performance ride.

While reaching a higher level of performance was key, Gorman had also given much thought as to the amount of comfort he and his wife would experience, sitting in this relatively small vehicle. Keep in mind this '64's original interior wasn't spacious or luxurious. This led him to toss out the factory seat and use a pair of Lincoln bucket seats with eight-way adjustability instead. They were reupholstered using dark gray leather, as were the custom-stitched door panels which are also now outfitted with billet arm rests. The factory dash was fine, but Gorman wanted to give a hint as to the Ranchero's performance. So he incorporated a JME billet aluminum bezel that houses a set of Auto Meter gauges that can be easily seen while the driver wraps his hands around the billet LeCarra steering wheel.

The heart of the Ranchero resides under the louvered hood. As mentioned earlier, the Ford 302ci V-8 crate engine sports the four Weber No. 45 side-draft carburetors and Moon aluminum intake. The air and fuel moves through the Ford Racing aluminum cylinder heads, while the combustion takes place with the help of an MSD ignition system. A set of Doug's Headers direct the exhaust gases out through custom side-exit duals that feature the same tip trim ring used on '65-'66 Mustang GTs. Approaching 400 hp, the small-block Ford is connected to a Tremec World Class T5 manual transmission, to which Gorman used an early style four-speed shifter to keep in tune with the Ranchero's classic appearance.

While some people appreciate the work and effort it takes to build a car from scratch, Sondra Gorman is lucky enough to realize that this particular Ranchero is more than just a cool little truck. She considers it a celebration of Rich's life and plans to showcase it at several shows this year in his memory. We can bet that she'll have many trophies to show for his work and for the effort of their friends that wanted to finish this unique vehicle just for him.