This Bright Orange Cougar Is A One-Of-A-Kind Vision

Wayne Cook
May 1, 2009
Photos By: Tracy Stocker
The whole Cougar design statement for the first generation was about refinement and style. The hideaway headlights and vinyl top are a formal-looking contrast to the brilliant orange paint and contemporary wheels. The blended front spoiler, emblem delete, and shaved door handles add to the custom feel of the car. The overall effect is refreshingly different. It's easy to understand why legendary car builder George Barris liked the hood on this Cougar, which has the cowl structure tastefully integrated into the factory hood contours.

Mark Dienes' '68 Cougar XR-7
Mark Dienes of Chesterland, Ohio, is the latest member of his family to own this unique '68 Cougar XR-7. It was purchased new by his grandfather and then given to Mark and his father Al in 1978 to be used as a father-and-son project. Mechanically, the car was in great shape, but almost every body panel needed work. Mark credits his father for having the foresight to go out right away and buy most of the major sheetmetal panels from Ford in 1978, while they were still available. Since that time, new sheetmetal supplies have all but dried up, and they are very expensive when available. Reproduction sheetmetal generally isn't available for classic Cougars. During the course of their ownership, the father-and-son team have spent more than $18,000 over three different rebuilds during the last 30 years. Mark discovered that finding parts for a classic Cougar project is much more difficult than finding components for a classic Mustang. He says that one thing in particular has helped him a lot over the years, and that was a detailed knowledge of which parts will interchange with a Mustang and which won't. He was then able to concentrate his efforts on those components that were Cougar specific.

Mark and his dad weren't going for a concours restoration, but rather a tasteful custom Cougar from the height of the Total Performance years. They wanted to add some extra performance in the form of a tall-deck 351 engine and some creature comforts as well, such as air conditioning. They have become experts at making universal application kits, which fit nothing specific, work on the Cougar when no dedicated components are available. One important example of such an upgrade was the aftermarket air conditioning, where many of the mounting brackets and hoses had to be made from scratch. The installation was involved, but now that the A/C is up and running, Mark says that they can't imagine life without it. The Air Ride suspension out back is another area where some improvisation was required.

The XR-7 gets a lot of exposure at car shows, and it has taken two International Show Car association (ISCA) trophies at recent exhibitions. During one event, car customizing great George Barris came up to the Cougar and praised the design and execution of the cowl hood. The car isn't only for shows-Mark drives it regularly. An AOD transmission is planned for longer outings. He isn't shy about putting the Cat through its paces, and recently had the speedometer pinned past 120 mph with the throttle to the wood on the back straight at Lowe's Motor Speedway in Charlotte, North Carolina. During dragstrip testing at Thompson Raceway Park in Thompson, Ohio, the XR-7 ran the quarter-mile in 14 seconds flat at 101 mph. Understandably, the father-and-son team are very proud of their bright orange Cougar and the car is renowned in their neck of the woods as the "Local Hero." 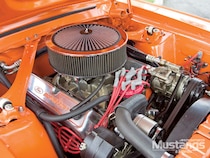 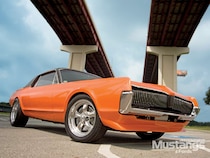 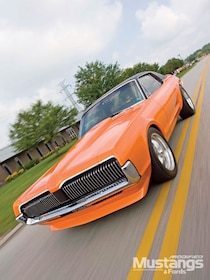 With the Grant steering wheel, white-faced gauges, and the B&M shifter, the interior has an all-business look. Mark was careful to remove all faux wood grain trim that was a part of the XR-7 interior.

Cougar Facts
What's An XR-7?
The XR-7 was an appearance upgrade package on the basic Cougar that really dressed up the car. Included were a woodgrain dash trim, overhead console, T-handle shifter, black-faced gauges, and a woodgrain steering wheel. Special upholstery was also part of the package. The GT package, with the 390 engine and heavy-duty suspension, was also available.

1968 Cougar production: 113,726
Engine options (six-cylinder engines were not available in the Cougar)

The convertible body style and 351W engine were not offered until 1969.