Ford fuel-injected fun can come in all shapes and sizes, but it's especially cool when the car in question is...

Growing up in western Pennsylvania with a father who was a body man, it was only natural that young Ron Aul caught the car bug. He could have easily gone in one direction, but he went another. "Where I live, a lot of guys were and still are into GM cars," Ron says. "You'd go to the cruise night or to the drags and it would be full of Chevys, Pontiacs, Oldsmobiles, and Buicks. Even though I can appreciate those cars and have owned my fair share of GM stuff over the years, I've always been more partial to Fords."

Ron's first foray into the world of performance-oriented Blue Oval machinery was a '71 Mercury Comet GT. "It weighed about 2,800 pounds," says Ron. "I put in a built 302 making 340 hp, teamed it up with a C4 automatic, and added 3.50 gears." Considering the power-to-weight ratio, it's fair to say that Ron's little blue Comet went pretty good.

The Comet eventually departed the Aul driveway, but the ever-resourceful Ron was always on the lookout for another of Henry's wheeled conveyances. Perhaps the logical choice would have been a Mustang, but with kids and other commitments, a ponycar just wasn't in the cards. "It's the back seat thing," Ron says. "When buying cars, there always had to be room for the kids, and a Mustang simply wasn't practical. Don't get me wrong, I love them, but it just didn't make sense to buy one."

A Bit Of Luxury
After driving some Fox chassis T-birds and Cougars, Ron thought that he could still have fun with a Fox, without it being a ponycar. Reading up on the Lincoln Mk VII LSCs, especially the '87-and-up models that got the 225hp Mustang V-8s, Ron's curiosity surrounding these cars was beginning to get the better of him. The fact that they were handsome, fast, and affordable only made things more appealing.

Ron started looking and lucked out when he came across an '88 LSC for sale right in his own backyard. "It was an original California car, owned by an older lady who'd brought it back east from the Golden State," he says. "The body was good, no rust, just faded paint and a few of the usual shopping mall parking lot dings." The car was sitting and Ron thought it was only likely to deteriorate, so he put an offer in to buy it. "She refused me at first, but then I think she realized the car needed work and that, as a car guy, I'd take care of it." So home to the Aul household it went. 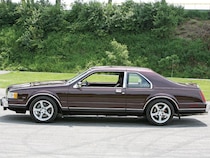 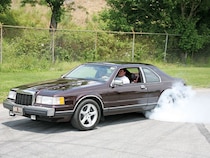 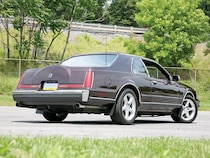 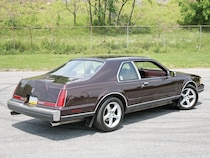 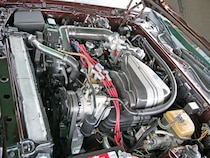 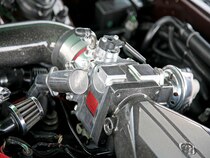 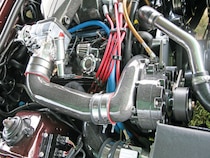 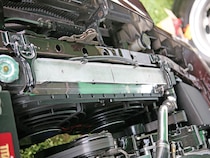 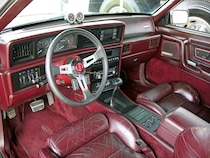 Blown Beast
In order to make the Mark driveable, Ron needed to fix the air suspension. One of the bags was leaking, so--knowing that the system can be problematic--he decided to ditch it and change over to coil springs. That cured the air suspension issue and the car was back on the road, able to take corners better than ever before.

Initially, Ron's plan was to keep the car in more or less stock condition for a few years, but the modification bug bit earlier than expected. "I managed to get a good deal on a Vortech S-Trim supercharger," he says. Naturally, it wasn't long before the blower was bolted onto the car's stock 302 V-8.

Ron's forced-induction fun lasted all of 100 miles when the engine blew out the rings. "I think that the previous owner never drove it hard and all that carbon had just built up around the pistons," he says. So out came the original engine. The original motor was rebuilt, this time with aluminum heads and a stud girdle. The S-Trim was bolted back on and after a bit of tweaking and tuning, Ron was rewarded with 350 ponies to the back tires. This time it ran perfectly, allowing him to address other areas--namely the brakes.

"Now that the car went pretty good, it was time to make it stop as well," Ron says. He kept the factory rear disc brake system and swapped to SN95 Mustang front spindles and Cobra 13-inch front discs. "I was able to use the factory master cylinder and modified ABS sensors so the factory antilock system still worked, even after the front brake conversion," he says. For clearance, he also added '96 Mustang Cobra 17-inch wheels.

With fortified power, improved handling, and better stopping ability, Ron was starting to really enjoy his Mk VII, driving it daily three months out of the year, taking it to cruises and shows, including the All-Ford Nationals at Carlisle, Pennsylvania. "It ran great and was comfortable to drive, but I started getting the craving for more power," Ron says. "So finally, in the winter of 2007, I decided to pull the engine again."

Another Transplant
Ron's plans were on a bigger scale this time, though, inspired by the killer deal he got on a new engine block. "I managed to find a couple of World Products R302 blocks listed for $999 at a place down in Texas," he says. "I wasn't able to get one of these, but I called up Summit and asked if I could get one through them. They even offered to price match it, so I ended up with a $1,800 block for around a grand." With four-bolt mains, Ron's new block was the perfect foundation for his new engine--a 331 stroker.

With GT40X aluminum heads and the veteran S-Trim supercharger, the new combination cranked out 475 hp--a big jump on the 302--but the extra weight of the new motor required stouter front springs to make the car sit level. Harnessing all that extra power is a built AOD trans, which has Kevlar overdrive bands, a hardened input shaft, lower gearing, and a Lentech valve body and shift actuation. The Lincoln has also been repainted in its original shade of Dark Cabernet Red Metallic, replete with pin stripes, by Angett Autobody in nearby Renfrew, Pennsylvania. As time marches on, Ron is slowly bringing the rest of the car back to snuff, despite the fact that it's already an excellent daily driver specimen. Dare we say tailor-made in more ways than one?

"I've gotten into powdercoating in the last few years," says Ron. "When I put the new motor together, I powdercoated as much as I could, including the block, intake, valve covers, and the blower. It's just so easy to keep it clean and I think the results look great. I've now actually started powdercoating stuff for other people--it's really caught on around here."

When we last spoke to him, Ron had added new BFG tires and Roush wheels to the VII, which still functions as his regular fair-weather driver. "It's fully emissions legal," he remarks, but now has set his sights on a full interior redo. "There are a couple of companies that can supply replacement upholstery, so that's my next major project," he says.

When asked whether or not he'll sell it, Ron says his '88 Mk VII isn't going anywhere. "She's a keeper. My dad bought a Mustang convertible not too long ago and I think that now that the kids are grown I might finally get one, too. But the Lincoln will be staying around, that's for sure."

Clearly, Ron's love for the luxury brand runs deep. Besides the VII, Ron owns a '95 Mk VIII and now with his son also driving a Mk VIII (a '93), it looks like the Aul household can rightly claim to be home of the Hot Rod Lincolns.

The Hot Rod Lincoln returns
Not since the early '50s have the terms performance and Lincoln really gelled. The '84 Lincoln Mk VII LSC (Luxury Sport Coupe) brought them together. Early cars used the 140hp throttle-body injected 302, but the air suspension and good handling made them decent grand tourers, especially considering they cost under $25,000. For 1986, engineers dropped in a 200hp sequentially injected V-8 engine and just over a year later, a bigger throttle body, larger intake runners, and new heads, boosting power to 225 hp.

Combined with new 16-inch wheels and tires, the Lincoln Mk VII became the Mustang GT in a tuxedo, or an American BMW 6-series (depending on which magazine you read). It also started gaining a legion of fans that learned that besides being great performers in factory stock form, these cars could be hopped up in much the same way as 5-liter Mustangs. A new dash, driver's airbag, and interior revision arrived for 1990 along with new BBS-style wheels on LSCs, plus the first of three special editions--others would arrive for '91 and '92, after which the VII bowed out, replaced by the swoopy new Mk VIII. Today, decent Mk VIIs can be picked up for well under $5,000 and are currently one of the best bang for the buck buys in the marketplace-Ford or otherwise.