With A Few Carefully Chosen Mods, An '83 Mustang GT Mixes It Up With The Best Of Them On Both Street And Track

Make no bones about it, the humble scribe writing this is a big fan of '82-'86 Mustang GTs, with the '83 ranking as a favorite. To this day, yours truly remembers the ads proclaiming, "One Hot Piece of American Steel." Although the car's 175 factory horsepower may seem laughable in 2008, 25 years ago it was a big deal. There was simply no new domestic performance car at that time that could offer the same level of driving excitement for under 10 large (the Camaro Z28 and Trans Am may have been newer, sleeker designs, but they were more expensive and less easy to live with on a daily basis).

Another guy with a real thing for '83 GT Mustangs is Mike Morella. "I remember when these cars came out," he says. "As a school kid in North Carolina, I lusted after them." By 1985, Mike was in high school and driving an Oxford White '83 GT with black interior. "It was just a really neat car," he recalls. "For the time, it was fast and a lot of fun. You could just steer it with the gas and off you went. Because it was light, it could run pretty good on the street."

Like any aspiring hot rodder, Mike did a few things to the car, namely installing a performance air cleaner and aftermarket exhaust system. "I did what I could, but was on a limited budget at the time," he says. Mike also lavished considerable care on the car, keeping that white paint sparkling and the interior nice and clean. Sadly, things came to a crashing halt-literally, as the car was totaled in an accident. "It was a real blow, but there was little I could do," he relates. "I knew I wanted to find another one, but in the meantime I decided to concentrate on other stuff."

Finding A Replacement
However, the lust for an '83 Mustang just didn't go away and in 1999, Mike came across an ad for one in the Mustang and Ford Trader. "It looked really clean, but at the time I didn't have the money to buy the car," he says. "But I decided to cut out the ad and keep it, hoping down the road that if the car was still for sale, I'd have the money to buy it."

And, as if destiny somehow intervened, a couple of years later, Mike had hoarded enough coin to consider buying another Fox Mustang as a viable proposition. "I still had the ad, so I decided to call the guy up on an off-chance and, wow-it was still for sale," he says. "It was in Alabama on jackstands. I asked my parents to go look at the car for me and they said everything checked out."

So Mike, then living in Florida, went up to Alabama, bought the car, and decided to drive it back home. "When I first laid eyes on it, the thing that got me was not only that it was exactly the same color as the car I had back in high school, but how original it was," he says. "By that point, most '83s were junk, but this car still had its original paint, graphics, and an interior that was in excellent shape. The only mods to it were a camshaft, a performance exhaust with long-tube headers, and an aftermarket stereo. The car still had the TRX wheels on it." On the way back home, however, one of the exhaust collectors blew near Jacksonville. To Mike, "it sounded like a NASCAR stocker, so I drove it steady, not wanting to attract attention, of course!"

Break Out The Tools
Back in his garage, Mike's next step was to figure out what to do with the car. "I'm a big fan of road racing and open tracking, and I knew that I wanted to take the car out and have some fun, but with the factory suspension, man, that thing would roll," he says. "One of the first things I did was lower the Mustang and put some tubular sway bars on it, both front and back. Because I knew it was going to see the road course (I raced motorcycles professionally for 13 years), I knew that, especially because it was a T-top car, the chassis needed some stiffening." Mike's solution was to weld in a set of full-length subframe connectors with seat crossbraces and a Steeda strut-tower brace. 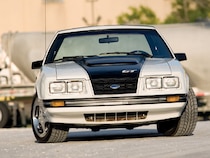 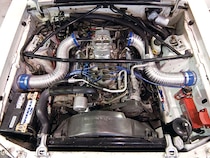 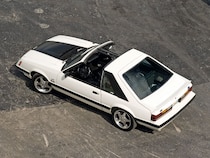 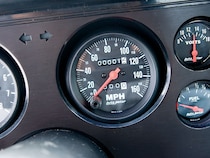 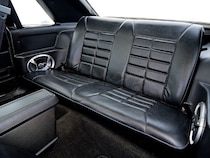 Of course, if any track-time was planned, something clearly needed to be done about the brakes. "It still had the 10-inch front rotors and factory rear drums on it. I managed to get my hands on Ford Racing's M-2300 Cobra brake kit with 13-inch front rotors and installed that along with the 10.25-inch rear discs," he says.

Of course, that required changing the spindles and now that the car had five-lug hubs, new wheels and tires were needed. A set of '96 17-inch Cobra wheels and Riken performance tires were ultimately selected. You can judge for yourself from the pictures, but we think these powdercoated wheels with the dark painted inserts really look at home on this car.

Engine mods run to a boring on the original '83 block, out to 306 cubes, TRW rods, Forged Diamond 9.5:1 compression pistons, an Edelbrock Air Gap intake, a Barry Grant Demon 750 carburetor, Comp Cams roller grind, and a pair of E7 iron cylinder heads prepped by Ronnie Wilson at Mustang Specialities. There's also a K&N air-filter assembly, MSD 6AL ignition control box with a tachometer adapter, Blaster coil, Steeda plug wires, plus a thunderous exhaust system that includes Hooker long-tube headers and a Dynomax after-cat. "I really have to extend a big thank you to Paul Riccio at Razor's Edge Motorsports for putting the engine together. Paul did an excellent job and is truly a great guy. I tell ya, this guy is a wiz, particularly when it comes to carburetors."

The GT now runs a Tremec 3550 five-speed gearbox with a Steeda Tri-Ax shifter, but interestingly still has a 7.5-inch rearend and 2.73 gears, though an Auburn posi has been added. Some may wonder at the decision to stick with the 7.5 and tall final-drive cogs, but for road racing, it works out just fine, helping Mike to save a bit of fuel on the street, a worthy goal, particularly at present.

Original Paint
The Mustang still wears its original Oxford White paint, center black hood stripe treatment, and factory-applied decals. "I've really tried to keep the interior and body as original as I can," Mike says. "I wanted to upgrade the instruments, so I carefully removed the stock cluster, found a replacement on eBay, and modified it to incorporate a set of Autometer gauges."

It's this kind of careful attention that really sets the car apart. "There are plenty of flashier, more powerful Mustangs out there, but I find it quite interesting when I take the car to work and park it in front of the shop," Mike says. "The '83 seems to get more stares than anything-even the younger guys are into it. I think it's the fact that the car looks tough and that you just don't see many around anymore. Plus, the guys who were into those cars when they were young now finally have the money to buy them and are starting to look for the survivors."

When asked about selling his '83, Mike replies, "Well, you're probably out of luck as it looks like it'll be staying in the family. My daughter, Grace, loves to sit in the driver seat and listen to the radio. She loves the car and the best part is that she's only 4 years old!" Yup, this is one car that doesn't appear to be going anywhere anytime soon.

This 1983 Ford Mustang LX owned by Tony Jones is driven on the street and has run 6.89 on the motor in the eighth-mile and 6.50s on spray with traction issues. Tony found this ’83 Mustang LX sitting in a field in Virginia about four years ago and thought it would be a great car for the engine he was building.

Check out Wes Duenkel's 1983 Ford Mustang GT! Wes was determined to visit the Road America course but had limited financial resources and technical knowledge. Sometimes, trial and error is the way to go!

Check out this quick guide on how to replace a Fox-Body convertible top. Click here for more details or check out the June 2012 issue of Mustang Monthly Magazine

A simple kit from latemodel supply can make your Fox-body convertible window repair a breeze. Click here for more details or check out the May issue of Mustang Monthly Magazine