From Humble Origins, This '64 Falcon Has Transformed Into A Legitimate Bird Of Play

When Ford introduced the Falcon to the growing compact market in 1960, it was about as far removed from a fire-breathing performance machine as you could imagine. Just 144 ci and 90 hp was as good as it got, though in just a few short years, the car began to reflect its namesake in more ways than one. Mid-1963 witnessed the introduction of the first V-8, the 260, while 1964's new sheetmetal ushered in the most recognized performance Falcons of the decade.

Following a promising rally debut with the sleek, new '63 1/2 models, a new batch of '64 Falcons were prepared by Holman Moody for the Monte Carlo Rally. This time, Bo Ljungfeldt finished Second overall and First in the over 2,500cc Touring class. Back in the United States, the new Falcon also made its mark on the dragstrip, with factory efforts for Dick Brannan and Phil Bonner involving shoehorned 427 High Risers. Hubert Platt and Dave Lyall were among other high-profile names that drove serious '64/'65 drag-race Falcons-both A/FX and match-race cars, which quickly evolved to include mechanical fuel injection, altered wheelbases, and even an occasional touch of nitro.

Father And Son
Ironically, the Falcon's history of speed extremes had little bearing on Jeff Boet-tcher's 1998 acquisition of our featured '64. Jeff had long been a fan of the unassuming Fords, having owned five over the previous two decades, but in the late-'90s, he was simply looking for a nice project car to build with his teenaged son Kevin. When this two-owner Futura turned up, it wasn't the sheetmetal's street cred that sold the pair on the car, rather its unusually clean and straight condition, which virtually guaranteed a successful result.

Initially, the project involved disassembly and a quality repaint of the factory Wimbledon White by Moslander's Rod and Custom in Monroe, Washington. Next, father and son swapped the tan bench-seat interior to black, and fitted the exterior with a variety of rechromed and N.O.S. trim. Looking good, the car existed in this configuration for a couple of years. "Kevin caught the speed bug and then gave it to me," Jeff says. Ideas were bounced around for any number of build concepts, but we'll limit ourselves to relating what finally came to fruition.

The underhood view is clearly what attracts the most attention and, in turn, is responsible for most of the speed-oriented big fun. A stout, AFR-equipped 331 is plenty healthy on its own, but it has obviously been topped with a real crown jewel-a Paxton Novi 1200 supercharger. When tuned on the chassis dyno at Marysville Speed and Performance, Jeff reported that peak horsepower approached 500 at a maximum boost of 10 psi, but that was a bit on the edge in terms of fuel requirements. Instead, it was decided to make the car more pump-gas friendly, which in turn dropped power down to near 400 with the necessary detune. Despite the big drop-off, Jeff seems content with the numbers, reflecting the Falcon's main duty as a street driver.

Stop And Turn
Perhaps we were hasty in saying the majority of the go-fast fun is courtesy of the drivetrain, for Jeff's '64 was obviously built for more than just traveling in a straight line. Handling characteristics are greatly enhanced by a Total Control front suspension, including upper and lower control arms, VariShock coilovers, and rack-and-pinion steering. Much simpler is the rear suspension, consisting of new leaf springs, bushings, and KYB gas shocks. When asked about the Falcon's driving characteristics before and after the suspension/steering changes, Jeff says, "The rack-and-pinion is awesome, and the adjustable front suspension helps dial in ride height and level of firmness. The car is way more responsive, and the road feel is a hundred times better than before."

Jeff wasn't after a purely retro look with his modified '64, so he figured the door was open when it came to new rolling stock. To that end, Kinesis 17-inch, three-piece wheels were ordered with a custom offset, making the most of the Falcon's inherently minimal wheelwells. Hidden further inboard is a four-wheel-disc brake setup from Stainless Steel Brakes Corp., featuring 11-inch rotors on all four corners, a dual-reservoir master cylinder, and an adjustable proportioning valve. BFGoodrich g-Force T/As were chosen in P205/50ZR17 and P225/45ZR17 sizes and contribute mightily to the Falcon's braking and cornering prowess.

A glance through the interior finds basic '64 accoutrements, with a couple of big exceptions. The Cerullo XR buckets are leather-wrapped and support in a way only dreamed of some 40 years ago. Likewise, a B&M shifter is married to a prepped AOD via Lokar shifter cables, offering vastly better control than the stock column operation could ever hope to pull off. Jeff says Kevin was the driving force when it came to-you guessed it-a modern sound system. We can't blame him, as quality audio has been a staple of his generation, greatly adding to the enjoyment of driving most classic automobiles. To that end, a Pioneer head unit works in conjunction with a trunk-mounted six-disc CD changer, feeding the good vibrations to Infinity speakers and a MTX subwoofer, all powered by a couple of Kenwood amps. 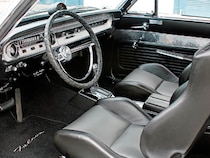 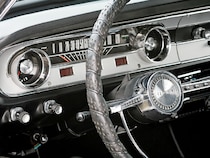 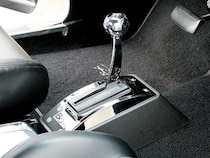 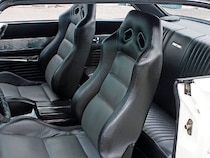 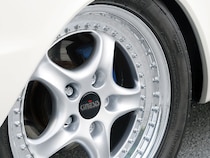 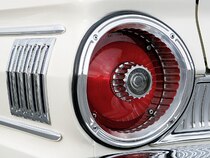 All-Rounder
When installation of all the performance hardware was wrapped up, the Boettchers found themselves with a car that is more than worthy of the speedy Falcon name, and carries on in the fine performance tradition of the '64/'65 body style. It's not over the top in any one area, yet it's a capable achiever in multiple disciplines. First and foremost, Jeff and Kevin agree that the project promoted quality time together and a stronger family bond-no doubt the best attribute of the car we can relay to our readers. Beyond that, Jeff's '64 is a terrific cruiser, energetic street performer, and occasional show participant.

It's also abundantly clear that the need for speed continues to grow in both Jeff and Kevin, as without prompting, they described plans for testing the Falcon's supercharged mettle on the dragstrip. Sounds like the Boettcher house had best prepare for a new round of that speed bug.

Dennis Payette purchased this 1964 Falcon Sprint for all the right reasons. Click here for more details or check out the June issue of Modified Mustangs & Fords Magazine