This Orange Bird Raises The Bar

Wayne Cook
June 1, 2008
Photos By: Randy Lorentzen
The stance and rubber on the car tells us that Al has achieved a nice balance between street-going ability and racing potential. It may be difficult to tell, but normally a '63 Falcon doesn't pack that much rubber underneath the rear fender. The wheelhouses were extensively tubbed.

Al and Trudi Dufek of Largo Vista, Texas, have had a long and colorful history with this '63 Falcon Sprint. As a matter of fact, the car was in Trudi's driveway when Al stopped by to pick her up for their first date. When he asked about the Falcon, she replied that it was an original '631/2 Sprint with a 260ci, factory four-speed, and Rotunda tach. The car was a little rough on the inside and needed a fair amount of bodywork, but it was all original and complete. Al told his new girl the car could be fixed up nicely for not much money.

Fast-forward and we find that Al and Trudi got married, and that's when she gave her blessing to go forward on the Falcon project. To begin with, Al wanted more power than the original 260 could offer. After finding a suitable block, he had Joe Jill at Superior Automotive in Anaheim, California, construct a stout 302 engine. Al had the tunnel-ram intake on hand since he knew from the beginning he wanted one sticking out of the hood, and he equipped it with dual quads.

After the installation of the engine but before work began on the body, Al and Trudi took the car to the Fabulous Fords Forever show at Knott's Berry Farm in Buena Park, California. While there, fellow automotive enthusiast and comedian Jay Leno walked over and became interested in the car. Among other things, Jay told them that "the engine was looking good and to go forward with the rest of the job." Surely both Al and Trudi felt encouraged in their project by Leno's interest and kind words.

When the time came to address the paint and body issues, Loy Auto Perfections of La Habra, California, was chosen to do the bodywork and orange paint. Cleaning up the car was the plan, and toward that end the door handles, trunk entry, side mirrors, cowl vent, gas cap, and windshield-wiper holes were all shaved off or filled in. The result is a super-clean body and a sleek look.

Al decided way back in the beginning of the project that he would give the car his best effort and produce something extraordinary. He also said his ultimate goal was to get his car featured in Mustang & Fords magazine. We're glad to say he achieved both. 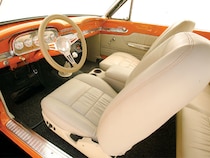 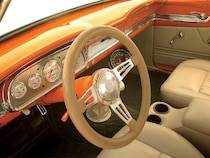 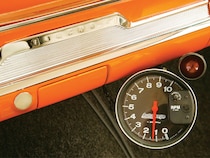 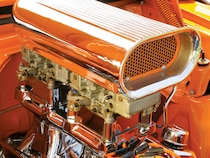 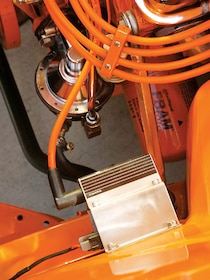 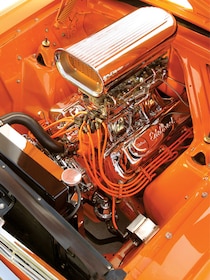 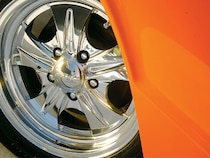 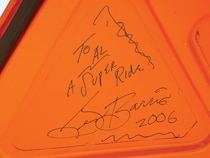