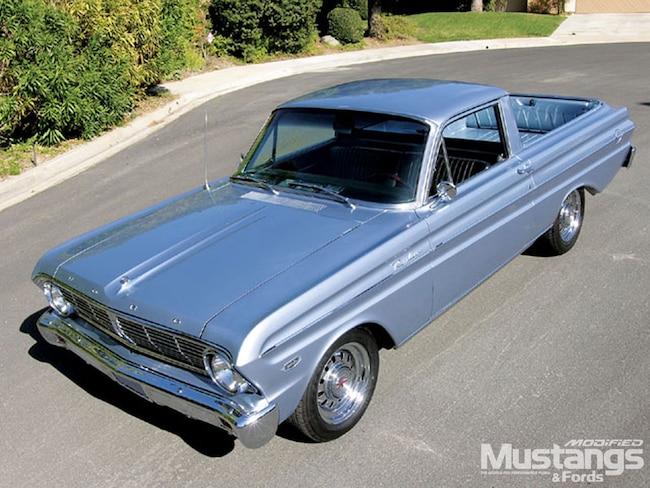 When it comes to Ford man Tom Stafford, one simple phrase sums him up nicely-"What goes around comes around." The "goes around" can easily be described as what Tom drag raced back in the '60s. For one, he raced a pair of '64 High-Riser 427 Galaxies. Then there was his pair of '69 428 SCJ Torinos. Want more? Think back to the thrilling days of yesteryear and the highly touted "Foulger Ford" Cobra Jet Mustangs. Tom had one of those, too. In short, his 428 Cobra Jet Mustangs won many races and set many national records, including winning the '74 NHRA Winternationals Super Stock Eliminator.

Tom began his Blue Oval supremacy trek in 1957, and today at age 65, his national record-holding Fords are in the hands of other people. In order to stay involved in the hobby and sport that has defined him for so many decades, Tom recently re-created a rare, one-family, '65 Falcon Ranchero. One family? Yes, Tom's father bought it with 4,000 miles recorded and drove it until he passed away. The current odometer reading is a legitimate 31,200 miles. The rare machine was willed to Tom, and as a tribute to his dad, he performance-ized it from front to rear and top to bottom.

Ironically, we saw its $7,000-plus, 461.2hp 347 Ford engine being assembled and dyno-tested at Joe Sherman Racing Engines (www.joeshermanracing.com) in Santa Ana, California, before we even knew of or saw the Ranchero. When the engine was all said and done, we asked Sherman where the bored and stroked 302 was headed. He quickly gave us the lowdown on Tom, so we asked for "first photo rights" when the pristine little Falcon Ranchero was up and running. The word is, only about 1,800 standard Rancheros were sold in 1965, and very few remain today.

Behind the Sherman 347 engine is a beefed-up Art Carr/California Performance Transmission C4 automatic. The torque converter has a 3,000-rpm stall speed. A special inline cooler keeps the fluid temperature in check. The Hurst pistol grip shifter actuates the gears. Aft, the 8-inch differential carries 3.55 gears with Traction-Lok. Glenn's Automotive in Costa Mesa, California, rebuilt the entire suspension and tied the subframes together. Four-wheel disc brakes with drilled and slotted rotors were also installed along with KYB gas shocks and Traction Masters. Up front are 15x6 Ford GT wheels on BFGoodrich P205/60R15 radials. To make a little more room for the rear 15x7s and P225s, '69 Mustang GT wheeltubs got the nod.

Stafford invested more than $37,000 in his dad's Falcon Ranchero. It was money well spent, many believe. The interior is exact Ford original and looks to be better than new. Wiring credit goes to Sam St. Amend at the TuneUp Shop in Costa Mesa.

Knowing how well his torrid "Total Performance" '60s Galaxies, Torinos, and Mustangs ran, Stafford checked his quarter-mile dream wheel and feels that with a bit of traction, the lightweight Falcon Ranchero can run 11.50s at 120 mph in street trim. This street car performance actually rivals his factory race cars.

The Falcon Ranchero can also be street driven virtually anywhere. Tom calls it a "street cruiser with old-time class." We won't tell you what the Brand-X guy said after he challenged Stafford's little Blue Oval jewel and got dusted by four car lengths. People who "Ford together" never get bored together, that's for sure. 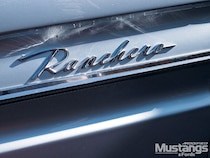 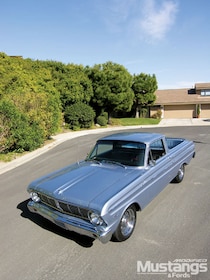 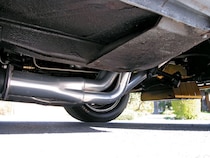