A Fairlane Fastback Budget SuperCar With A Stealthy Demeanor 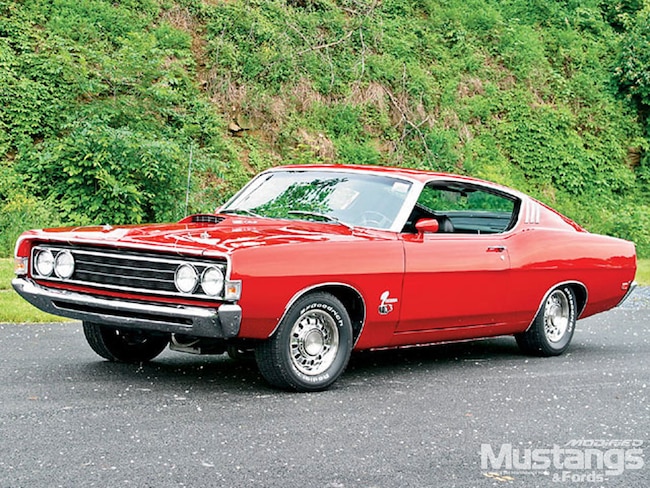 At first glance, Jerry and Mary Becker's '69 Ford Cobra looks like a Torino. A lot of us are guilty of calling these cars Torino Cobras-but that didn't happen until the '70-'71 model years when the Cobra was indeed a Torino. This is a Fairlane Cobra-'69 only-a budget fastback chock full of the menacing 428 Super Cobra Jet big-block, short on the stylish, upscale appointments found on the Torino.

On the surface, the Fairlane Cobra is vanilla-a super sleeper musclecar with a taxicab interior and minimal "bling" outside. In many respects, it's on a par with the aero-nosed '69 Torino Talladega. The Talladega is anything but usual because Ford built fewer than 800 of them to satisfy NASCAR homologation requirements.

The Fairlane Cobra is an all-business budget musclecar designed to go fast and cruise the drag-niched in a narrow, low-buck market that included the Plymouth Road Runner, Dodge Super Bee, Chevrolet Chevelle SS, Pontiac GTO, Olds 4-4-2, Buick GS, and the American Motors Hurst SC Rambler. These were all affordable, big-inch musclecars just about anyone could get into for well under $4,000.

The Fairlane Cobra 428 CJ was available in two body styles-fastback (SportsRoof) and hardtop. We're pretty sure Ford changed the name fastback to "SportsRoof" due to rising insurance rates and concerns on a federal level about safety. The word "fast" became politically incorrect. Another classic musclecar, the Dodge Demon, was changed to Dart Sport in 1974 in order to make it politically correct.

Jerry bought his Candyapple Red Cobra SportsRoof in Northern Ohio in 1997. Of special significance is the car's point of manufacture-Loraine, Ohio-not far from where he found it. What's more, the date code on the warranty plate is 02U or July 2, 1969, which is Jerry's birthday. It was a match made in heaven for a guy in pursuit of a lifelong dream.

We're not always certain where inspiration comes from when it's time to buy an old musclecar, but we do know Jerry was a young man when Ford was building Torinos and Fairlanes at Loraine. Jerry remembers the "Get your motor running" stuff from four decades ago, the roar of American V-8 power, positive G-forces at your backside, and the thrill of it all. While it's mostly about memories of being young, it's also about an era rooted in freedom of expression.

To relive those memories, one has to follow the tedious process of getting there. Jerry had to find the car of his dreams, a limited-production Fairlane Cobra. It wouldn't be easy, considering few were produced to begin with and not many survive today. Jerry estimates less than 1,000 still exist because these cars were conceived and produced for speed-and abuse. They roared off Ford dealer lots across the continent headed for racetracks and back roads. When they grew old, their muscle parts were copped for other projects. Many rusted away or were destroyed in accidents. When Jerry found this Cobra, it was pay dirt-a lottery quick-pick he never expected.

Jerry wanted to remain faithful to the Cobra's originality, but he also wanted to build a mild modified-not a restomod, but a '60s-style modified musclecar hopped up the way he remembered. He wanted a warmed-up 428 Super Cobra Jet with all the right stuff: a 0.030-inch overbore for forged flat-tops, an Isky mechanical cam with the sweet clatter of solid tappets, Dove roller rockers, a 7-quart Cobra pan, Hooker long-tube headers, a nice balance and blueprint job, and the pleasures of Ford's factory Drag Pack.

Complementing Jerry's SCJ is a close-ratio Top Loader four-speed with that splendid First-gear whine under hard acceleration. And when he runs this Top Loader through the 3.91-geared 9-inch Traction-Lok, acceleration is startling as the SCJ unwinds. "What I love most about this car is the 428 SCJ's performance along with the four-speed. It's that musclecar thump and power associated with the good old days," Jerry says. 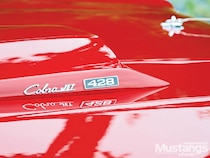 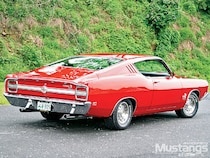 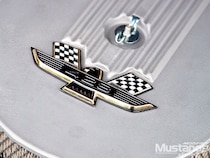 The most challenging aspect for Jerry was finding parts and restoring the car authentically. The Cobra decals, for example, took a long time to find. The Fairlane's standard seat fabric was also difficult to source but necessary for authenticity. We like the pod-style instrumentation common to '68-'69 Fairlanes and Torinos. Ford did this better than anyone out there when you consider what was available from GM, Chrysler, and AMC. The Blue Oval never did anything low-buck back then when it came to interior styling and quality. It was always a cut above because Ford stylists were always among the best in the industry.

When we asked Jerry if he'd ever sell his car, we were surprised when he said maybe. This tells us there's another dream out there somewhere waiting for him. Meanwhile, he'll remain focused on rich Candyapple Red DuPont acrylic enamel and striking Cobra graphics, basking in the glow of knowing he has achieved something few will ever experience.

Interior
Stock with bench seat and Hurst Competition Plus shifter

Join Mustang & Fords Magazine for a feature on Ed Putz and his two vintage Fords, a 1969 Fairlane Cobra & 1969 Torino GT.