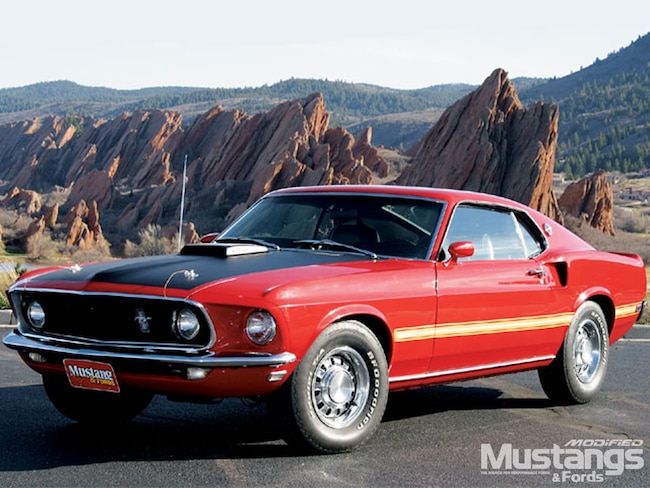 Scott Main of MPG Head Service/Cam Dynamics in Englewood, Colorado, beams with euphoria whenever he talks about his first love-his high school sweetheart-this Candyapple Red '69 Mach 1 with a 428 Super Cobra Jet. "This car has an amazing history," he says. "When I was 14, my mom drove this car to the drag races just so I could go racing. I would race in what was known as Pure Stock Eliminator, and my age was never questioned because no one ever asked." That was 37 years ago.

Scott sports a true Wild West demeanor-rough around the edges, handsome, captivating, determined-a never-lift, silent type. He could cruise into the Western-wear department and walk onto a Hollywood set as a time-hardened gunslinger. Make eye contact with him and you see the rough and tumble of Colorado's high plains where he has been all of his life. Scott understands what it means to tough it out and go the distance, and he knows what "winning is everything" means.

In 1970, Scott was more fortunate than most 14-year-olds as he was already driving at that age. He was so determined to learn how to drag race that his mom drove the new Cobra Jet Mach 1 to the dragstrip, handed him the keys, and wished him luck. Talk about trust! Drag racing was surely his destiny because he has been living the 1,320 for most of his life.

At MPG Head Service and Cam Dynamics, Scott and a close circle of friends and experts investigate how to make power and shorten elapsed times. These gentlemen have the attention of a lot of engine builders around the country because they've competed- and performed well-in the Jegs Engine Masters Challenge.

When Scott drag raced this Mach 1 during the early '70s, he turned in impressive timeslips, which opened a lot of eyes around Denver. In those days, there was no bracket racing, only a heads-up class and a "run what you brung" mentality. "If you won in your class, you were allowed to compete in Pure Stock Eliminator (A/Stock to Z/Stock) in which all classes would race each other," Scott says. "The winner was declared the champ."

When Winston stepped in during 1975 with big money, Scott became serious about going faster. You're looking at an NHRA champ from long ago-D/Stock NHRA national record holder with 12.03 seconds at 115.10 mph.

At the NHRA World Finals in 1975, Scott turned in a mind-bending 11.72 at 118.66 mph, making him and his Mach 1 national champions. For two years in a row, 1974-1975, Scott was Stock Eliminator champ in NHRA Division 5 competition. That's nice work for such a young man. NHRA records remain proof positive of what Scott is all about.

When you study these 11- and 12-second quarter-mile times and speeds, keep in mind these numbers were turned in at Mile-High Raceway at 5,000 feet, which teases us about what it might have done at sea level.

When Scott decided to retire the Mach from racing in the late '70s, it had just 20,000 miles on the odometer. The car was put away and not driven for years. Of course, it wasn't your typical low-mileage Mach 1. It was dusty around the edges from weekend drag racing and needed freshening. Scott was wise enough to keep most of what the car had on it from the factory. He also took extraordinary care of the finish, protecting it from harm for many years. That made getting the car back to stock condition easier than if he had just tossed everything, as many of us did back then. He's still looking for the missing Cobra Jet air cleaner snorkel.

We give Scott a lot of credit for the Mach's condition today. That's the original Candyapple Red enamel finish. Check out the fit of the door and fender gaps. The doorjambs have all of the original stickers and the warranty plate; the Shaker scoop has the original die-cast Cobra Jet script. When Scott went drag racing, these Styled Steel wheels were carefully stowed away for safekeeping. The only things that have changed are the BFGoodrich Radial T/A tires, which make the car ideal for cruising today.

Of course, cruising isn't always easy when you have a 3.91 Traction-Lok. Expect to sacrifice at the tachometer, which Scott does willingly. Remember, this car was born for drag racing. These drag-race cogs push the 428 Super Cobra Jet at freeway speeds. When it's time to cruise the drag around town, 3.91 gears are terrific for showing off in blazing, traffic-light-to-traffic-light performance.

The truth is, you'll rarely see Scott and his Mach 1 cruising Colorado's high plateau because he's committed to keeping the car as original as possible. He's noticeably proud of the car's racing history, dovetailed into its pristine condition-something few die-hard drag racers ever achieve. It's almost impossible to believe the car's knitted/vinyl sports interior is the original material and stitching-done by Ford 38 years ago. Do you like the molded twin-pod dashboard and instrument panel? They've never been removed from the car. Ford's C6 Select-Shift takes the thinking out of driving, especially along the front range of Colorado's Rockies. These high-back bucket seats are as comfortable as they were when Scott was handed the keys nearly four decades ago.

Scott enjoys his own reality-the psychological element that goes with being 50 and still owning your first car. Having the car you drove to high school is special-an old friend you've been with all of your life. For Scott, it's just another day with his high school sweetheart.