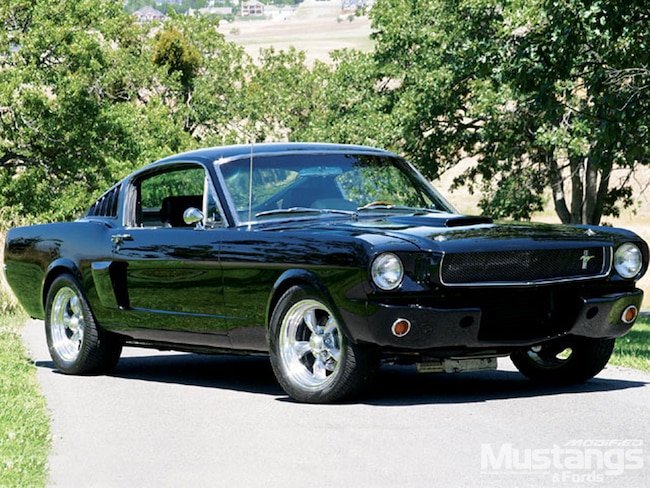 Medford, Oregon, hides in plain sight along Interstate 5, just north of the California border. This largely agricultural community is on the beaten path, yet far enough off of it that the masses have never really discovered the place. Retirees love it. Natives treasure its natural wealth, where rich evergreens meet Oregon's desert. The area's economy, as you might imagine, is driven by agriculture-peaches, pears, even grapes thanks to liberal doses of rain all winter and abundant sunshine in the summer months. It sounds like a good environment for car building, too.

The Rogue River Valley's winter months yield rain, cold, and occasionally snow, which makes this a perfect haven for car building all winter long and ideal for a cool rollout when spring arrives.

Chuck Martinez understands. He was thumbing through a discarded newspaper years ago when he happened upon a '65 Shelby GT350 replica in the classifieds. The ad rekindled memories of his first car-a K-code '65 Mustang fastback with a 289 high-performance V-8. Nostalgia got the best of him. When Chuck looked at the car, he learned it had been campaigned in road rallies. It didn't take long to close the deal.

While driving the 170 miles home, Chuck grew disappointed with the car. It was noisy. The steering was sloppy. It rattled. Wind noise was awful. It was worn out. His dream quickly unraveled. He was in that unfortunate dilemma of whether to sell or restore. That's when he thought of Ken Mann, a seasoned restoration guy in Medford. Ken knew Mustangs-and he knew what to do with Chuck's well-worn steed. When Chuck shared his dream, Ken had an appreciation for what the project meant. He poured a lot of passion into its effort.

What makes this engine a terrific value is that it's ready to install and run. There's no time lost on a machine shop, it comes with a warranty, and all it needs is dress-up time after it arrives. Ken uncrated the M-6007-D351FT small-block and fitted it with all the accessories necessary to get it going. An MSD billet distributor with fat 8mm wires keep the powerful spark focused. We like the K&N air cleaner, which is designed to allow maximum airflow for 360 degrees, as well as on top. It breathes. It performs.

Chuck's 351W crate special includes a new two-bolt main Sportsman block custom-built by FRPP. Inside is a nodular-iron crankshaft, forged I-beam rods, flat-top forged pistons, and a roller-hydraulic camshaft with a GT-40 valvetrain. When you top this block with GT-40 heads, you get 9.0:1 compression, which is ideal for today's fuels; then mill the heads a pinch to achieve a higher compression ratio and more power. Chuck was able to get into this engine for less than $8,000.

Because the driving experience was so important to Chuck, he outfitted the car for a surreal experience. Behind the 351 is Tremec's World Class T5 transmission built by Modern Driveline. The T5 is a wonderful gearbox for both performance and cruising efficiency. In gears one through four, there's the thrill of hot acceleration, and when it's time to cruise at highway speeds, there's Fifth gear and more civilized rpm. Ken ordered a Currie 3.73-geared 9-inch Traction-Lok with 28-spline axles, which enables Chuck to accelerate quickly with an attitude before it's time to slip the T5 into Overdrive. Call it having your cake and eating it, too-without the high price of an old-fashioned four-speed and high revs.

Down under, Ken paid close attention to both safety and handling. Inside those 16-inch American Racing Torq-Thrust IIs are Stainless Steel Brakes Force 10 binders, which provide extraordinary stopping power. But all the power in the world is meaningless if you don't have control. It was important to Ken that Chuck have both control and confidence. Confidence comes from knowing you have good stuff underneath. Ken opted for Total Control Products coilover shocks and a power rack-and-pinion steering system. In back are Grab-A-Trak five-leaf mideye springs and KYB Gas-a-Just shocks from Mustangs Plus.

We mentioned American Racing Torq-Thrust IIs. American Racing took an already terrific, timeless idea and made it better with these polished and powdercoated wheels. Chuck wrapped them in Toyo speed-rated tires for plenty of good adhesion for canyon chasing around Southern Oregon. They look terrific and offer exceptional handling.

The gold in a project like this isn't so much what Ken built for Chuck, but what Chuck has in his heart whenever it's time to saddle up. He listens to the roar of his 351W mill and relives the Hi-Po engine of his youth. And that's what makes these Mustang classics such a rush for anyone fortunate enough to own one in 2007.