This Rare '79 Cobra Went From Meek To Mean, Thanks To The Efforts Of Twin Brothers Who Simply Love Fox Body Mustangs. 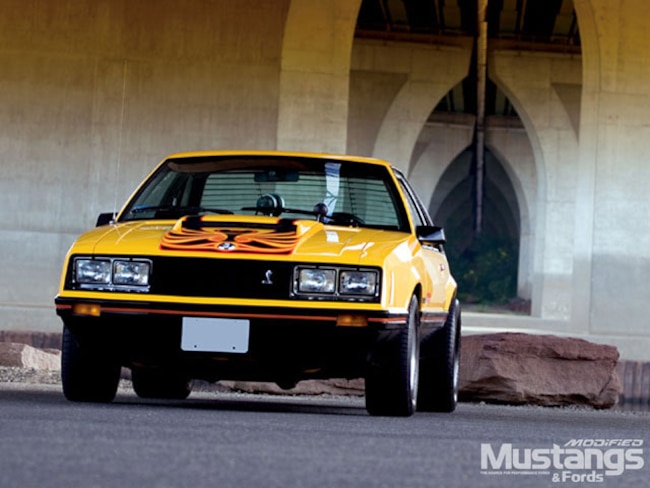 Pete Slaney’s 1979 Mustang Cobra
Many of us have been there. Back in high school we all wanted a car of our own. Sometimes we made do with the hand-me-downs given to us by our parents or family members, but, more often than not, we secretly harbored the desire for a cool ride. Pete Slaney would have given his right arm for a 1985 Mustang GT in high school but "the insurance was just outrageous, so I had to settle for a Ford Ranger instead." Still, it was a set of wheels, but as time passed Pete's enthusiasm for Ponies of the wheeled variety began to grow. "Ultimately, it was my twin brother, Paul who really got me to take the plunge." Paul purchased an '85 GT and being the hands on kind of guy he is - he works in a machine shop - turned the four-eyed rocket into a 12-second, show-winning street car. "It was really nicely done. I used to go for drives in it and once I felt the power and awesome drivability for myself I knew I had to get a 5.0 of my own." That day finally came in April 2000.

"My uncle came across this car in the local advertiser and he steered me towards it. It was a 1979 Mustang Cobra and the seller was asking $1,500 for it. At the time, I didn't know what a '79 Cobra was but my uncle and my brother suggested we go look at it, so we did." The car turned out to be a red on black Cobra hatchback, replete with the TRX wheel, tire and suspension package, full Cobra graphics (including the infamous snake hood decal), tilt steering, cruise control, power steering, brakes and door locks, sunroof, four-speaker sound system with AM/FM radio, rear defroster and four-way driver's seat. "It had just 28,060 miles on it - the car was a turbo four-cylinder 2.3 with a four-speed manual transmission - it was very original and in good shape. My uncle said that if I didn't buy it, he would, so I took it home."

So now Pete had a Mustang of his own. The question now however, was what to do with it. "I drove the car a bit when I first bought it. [The Mustang] ran well but, with only 131 horsepower on tap it was a bit of a slug, it needed something. My brother and I, because we are twins, thought it would be neat to duplicate the drivetrain of his '85 GT in my car and have essentially the same mechanicals with two different body styles and colors - so that was what we did." Pete's brother Paul (whose car we'll be covering in an upcoming feature), went to work finding a suitable replacement engine via his day job at Mid-Cape Automotive. "It came out of an '88 5-liter," says Pete. But by the time the Slaneys were done with it, not much was still stock. "Paul did the motor work - he machined the block, and it was bored .030 over, zero decked and align honed." To the block were added a set of Keith Black Hypereutetic 10.8:1 compression pistons - domed of course and via the pins, linked to a stock set of rods and reground stock crankshaft. One area where Pete decided to take a different route than his brother concerned the valvetrain and heads. "In an effort to gain a bit more power with my engine, we decided to go with some AFR 185cc aluminum heads and a bigger Elgin camshaft with a 108° center and 248/258° duration at .050-inch lift - the engine in my brother's car used '69 Windsor heads and a smaller cam. It didn't work - my brother's engine actually made 4 rwhp more on the dyno than my combo did and when my car was finished, his proved more consistent at the track!"

Pete also modded the engine to include Comp Cams roller lifters, dual springs and retainers, plus where a fuelie intake once sat is now an Edelbrock F-28 manifold on which sit two Edelbrock 500 cfm carburetors. A Carter mechanical fuel pump provides feed to them from the stock 14-gallon gas tank (it's a '79 remember ... ), while ignition chores are handled by a MSD billet distributor and good ol' Blaster coil along with a 6AL control box. Autolite plugs are linked, via Taylor 8mm wires to the distributor, coil and Autozone battery. The Slaney brothers wisely decided to upgrade cooling with a Ford Motorsport 3-core radiator and new V8 hoses. Because the car was originally a four cylinder turbo, a complete driveline and suspension upgrade were necessary to handle the added power and weight of the eight cylinder motor. The stock tranny was ditched for something a lot stronger - a Tremec T3550, linked to the engine via a stock Ford flywheel and CenterForce 10.5-inch Dual-Friction clutch and pressure plate. A Ford Motorsport aluminum driveshaft connects to an 8.8-inch diff, but as first built, Pete's car still ran the 7.5. "Yeah, the first time I took it to the track in April 2004, it still had the original rear end in it. Because of that, I knew that I couldn't run sticky tires. Still, I did manage a 13.3 at 102 mph at New England Dragway." Today however, things are a bit sturdier under the rear of the '79 Cobra. Said 8.8 we mentioned is a Ford Racing unit and houses a set of Superior 31-spline axles, plus Pete's car features a real Detroit locker with 4.30 gears. The car runs a full MAC Products exhaust, front to back, consisting of 1-3/4-inch long-tube headers and 2-1/2-inch H-pipe and mufflers.

With a straight-line biased driveline, the suspension naturally follows suit so at the front, you'll find a drag setup with 90/10 Competition Engineering front struts and Ford Motorsport 'B' springs, while linking up that 8.8 is the job of Steeda adjustable upper control arms, South Side Machine lower traction bars, Ford Motorsport 'B' coils and Competition Engineering shocks - this time 50/50s. Pete's Pony also has another trick up its sleeve in the form of an airbag system to further aid weight transfer and maximum traction under sustained drag launches. Despite the considerable mechanical upgrades, the exterior of the Cobra is largely stock, save for the Weld Draglite rims and BF Goodrich rubber. "The car was originally red/orange with yellow and black graphics," says Slaney, "but I wanted something that would stand out more - so I decided to sort of reverse it and paint it yellow with orange and black decals." The color he settled on was 2001 Nissan Xterra Yellow and Scott Lockhart of East Bridgewater, MA laid on the PPG basecoat/clear urethane hue. One issue Pete had, concerned the graphics. "The 1979 Cobra decals were pretty unique and once I realized what the car was I knew that it would be cool to have some new ones." However, they proved exceedingly tough to find. "I tried the usual vendors, but they were out of stock and couldn't get any more. In the end, Phoenix Graphics came to the rescue. They had done decal kits for late '70s Trans Ams and Z28s and they said that provided it was okay with Ford, they could reproduce graphics for my car from original blueprints. I told them I was really serious about getting some decals and even offered money up front. They said not to worry, but that it might take a while if everything was approved, because they had to go through a silk screening process. Eventually, after about six months I got them." And what an addition they make to the car. "I can't thank those guys enough and I give them a plug whenever I can." Because the car was in really good shape when he bought it, Slaney didn't do too much with the interior. "I added an Auto Meter 5-inch tach and triple gauge package (oil, volt, water). I also changed the stock steering wheel for a Grant 1114 carbon fiber one with billet spokes and the car has a Sony Xplod CD/Stereo with Pioneer speakers, other than that, it's stock."

It took about four years in total, from start to finish, to complete the transformation. And once the car was running and driving, people started taking notice, in a big way. "My brother and I go to New England Dragway about three times a year, but I try and drive my '79 on the street as often as I can. My best run at the track to date is a 12.42 @ 110.08 miles per hour which it did in October 2005. From the outset my goal was to have a 12-second car like my brother." Mission accomplished on that front then.

Besides track times, Pete's Cobra has been turning heads across the North East and bagging trophies like a spinster collects stray cats. "We like to go to car shows besides cruising and racing. At the first show I took it to, the Mustangs Unlimited show in Manchester, CT I got second place - they organized another one a couple months later in June and I won best 1974-93 Mustang at that one - it was a great feeling that all the hard work putting the car together had really paid off - it was truly worth it." From there, the Cobra garnered more awards, including a first place at a Mustang Car Club of New England show in Brockton, MA in the fall of '04. The following year, the yellow 'n' black hatch garnered three first place awards at shows, one at Mustangs Unlimited, one at the Tasca Ford show in Cranston, RI and another at Rodman Ford in Foxboro, MA - hometown to the New England Patriots football team. "I really have to thank my brother Paul, because without him, I would not have this car - he's largely responsible for all three of our cars, his '85 my '79 and our cousin's SVO." And, as far as Pete is concerned, he isn't planning to sell the '79 anytime soon. "This car is unique, I like that. You just don't seem them and to date I haven't come across another one - I've only found pictures of them - they are rare Mustangs and it's great when you get recognized for having something different." But as great as that is, Pete still has something he's looking to do with the car. "My brother has now built a stroker motor for his car, so once this one goes south, I think I'll be following that same path." Ah, sibling rivalry. When it comes to Mustangs, you gotta love it.

Acknoledgements
Special thanks to my twin brother Paul Slaney, my wife and daughters; Scott Lockhart and Phoenix Graphics