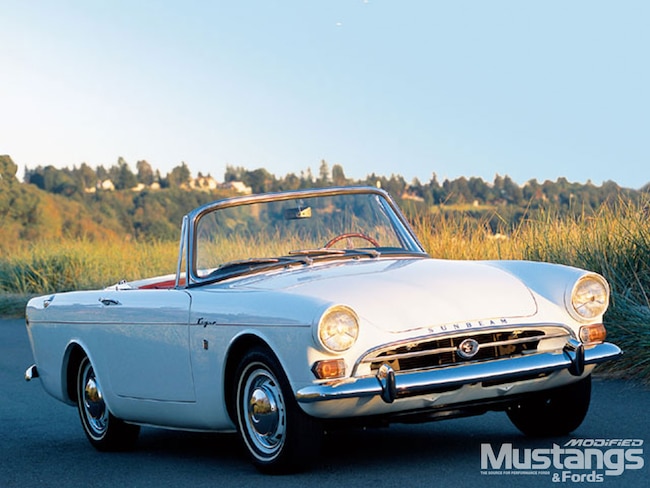 It would take considerably more than a magazine article to chronicle the history of the Sunbeam Tiger, but Brett Simpson's Tiger Mk I gives us chance to relate at least part of this interesting tale. You see, brett's Sunbeam is the first true Tiger body built, a distinction that led to a bone-stock appearance we don't normally associate with this fun-loving Anglo-American hybrid. Looks can be deceiving however, and like all Tigers, this one packs a punch that belies its conservative English appearance.

Explaining this Tiger's claim to fame gets a bit complicated, particularly for those who aren't well versed in Tiger-speak, but we'll do our best to relate the story. The VIN number of B9470047 might lead you to think it was the 47th unit of production, which it may or may not have been, but the real keys here are the 0001 JAL number and the numero uno ROTA designation. The JAL number was the identifier affixed by British Pressed Steel, the subsidiary who manufactured Tiger and Alpine bodies for Sunbeam's parent company, Rootes. Alpine bodies received a SAL serial number (denoting Sunbeam Alpine), while Tigers got the JAL (Jensen Alpine) serial number since they were destined for assembly at subcontractor Jensen Motors Ltd. The ROTA number is generally thought to be the factory order number, so it's clear that 0047 was the first factory order and the first Tiger body produced. Was it also the first production Tiger to be fully assembled some 41 years ago? Considering the complicated nature of assembly line work, probably not, yet the car's significance remains.

Brett realized the early production nature of this car the first time he spied it on the streets of Tukwila, Washington, in 1979. He wouldn't hold the pink slip for years to come, but being a newly christened Tiger owner, Brett chased down the rather tired-looking Mk I he encountered one afternoon. A friendly conversation with then-owner Ken Miller followed, along with a brief once over. Brett's curiosity was aroused by comparative oddities to his own car, and when he noted the early 0047 VIN number, it stuck in his head for years to come.

During the ensuing decade and a half, Brett's interest in all things Tiger grew, with several of the breed passing through his hands. After reviewing Tiger guru Norman Miller's book, The Book of Norman, he came to realize the 0047's significance as the first Tiger body from Pressed Steel, and embarked on a hunt to determine if Ken Miller might still hold the keys. After some serious sleuthing, Ken was found to still own the car, and a deal was struck some six months later. Evaluation and disassembly of the historic machine revealed a rather rough starting point, but at least the original 260-inch V-8 drivetrain was fully intact. Subsequent restoration revealed items seen only on the earliest production numbers, such as provisions for right-hand-drive throttle linkage and a rather crude clearancing in the bumpstop area of the frame.

While most of the mechanicals were rebuilt to original specs, Brett is a performance junkie at heart, and shelved the factory 260 in favor of a '64 289 with 302 internals. Earle Baird meticulously assembled the now 305-inch engine, with more hidden upgrades coming in the form of an Edelbrock hydraulic cam, Hi-Po 289 distributor with Pertronix electronics, a windage tray, and a balanced reciprocating mass. To this, he added the Los Angeles Tiger (LAT) dealer optional Super Induction Kit-consisting of an Edelbrock F4B intake and Holley 465-cfm four-barrel. Despite such performance-oriented revisions, the underhood view is circa 1964 perfection, and exactly as we'd imagine many a Tiger being sold throughout the mid-'60s. 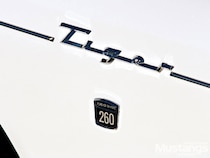 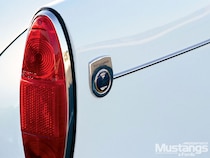 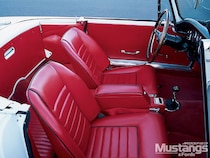 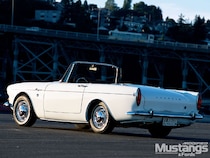 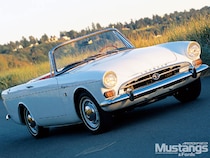 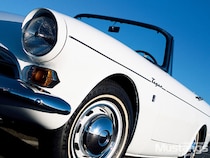 From the outside, unsuspecting observers will likely mistake this particular car as one of a slew of '60s-era, four-cylinder British roadsters. The 13-inch rubber and hubcaps are stock. (we can't remember the last time we saw a Tiger with such diminutive rolling stock.) The unusual original color is known as Moonstone, and while it may come off in photos as a mostly gray hue, there are distinct bluish-green tones in the flawless PPG urethane respray by Roland Griffith. the interior is refurbished in the factory red with black piping, with the two-seat confines featuring a full complement of Smiths/Jaeger instrumentation in true sports car fashion. Brett gives credit to upholstery magician, Martha Christiansen, for the end result in the cockpit, which also includes Wilton wool carpeting as original.

Despite 2.88 gearing in the original Salisbury (Dana 44) rearend, Brett reports the short tire height, close-ratio Borg-Warner T10, and svelte 2,500 pounds translate into impressive acceleration. We witnessed the same factors at work as he enthusiastically lit up the wimpy Dunlops at will, though we certainly didn't duplicate the same feat when offered the keys for a testdrive. No, discretion is often a journalist's best friend, and we wanted a happy ending to this one-of-a-kind story.

Regardless of its status in Tiger history, Brett doesn't treat this car as the museum piece it could easily be, but as the vintage sports car it truly is.

Even Better
Appealing to the high-performance crowd has been part of the Sunbeam Tiger's pedigree from day one, and it didn't take long for the parts pipeline to fill with the good stuff. From sway bars to tachometers, the innumerable LAT (Los Angeles Tiger) options offered through Tiger dealers led the way. We've chronicled just a handful here.

Ins And Outs
Norman Miller's Book of Norman is a motherlode of information for the hardcore Tiger enthusiast, and we leaned on it heavily to assemble the information presented here. It turns out that Tiger production actually began in April 1964, and ended a little more than three years later in June 1967, at which time more than 7,000 had been built. Miller explains that while laws varied from state to state, California Tigers were titled based on their date of sale, with any transaction after October resulting in a title showing the following year. With this system, it was possible to have a '68 Tiger even though manufacture ceased in what would clearly be considered the '67 model year.

Two variations of the breed were officially recognized: Mk I and Mk II, but a myriad of production changes along the way made for considerable variation. Changeover between the Mk I and Mk II occurred during December 1966, but to add a bit of confusion, the hobby generally identifies a Mk I built after August 1965 as a Mk IA. We'll highlight some of the distinctive features of each, including the IA.

Mk I-Manufactured between April 1964 and August 1965, all powered by five-bolt 260 V-8s. Rear corners of hood and doors are rounded, as opposed to the square Mk IA, though the last 600-700 of the 3,763 total feature the Mk IA's square-corner body features. The Mk I also used a metal convertible-top boot cover.

Mk IA--Manufactured between August 1965 and December 1966, all powered by five-bolt 260 V-8s. Sunbeam lettering above grille has disappeared, and vinyl convertible-top boot debuts. Rear corners of hoods and doors are squared, as are the trunklid corners on roughly the last 1,800 of the 2,706 total cars. Cowl-fed fresh-air system introduced. Late manufacture dates can result in '67-titled Mk I.

Mk II--Manufactured between December 1966 and June 1967, with a total of 536 units. All were powered by six-bolt 289 V-8s. It had a new egg-crate grille, nonhooded headlight surrounds, stainless rocker and wheel arch moldings. The stainless side trim was replaced by lower body tape stripes. The Sunbeam decklid lettering was replaced by Tiger script at a 45-degree angle.