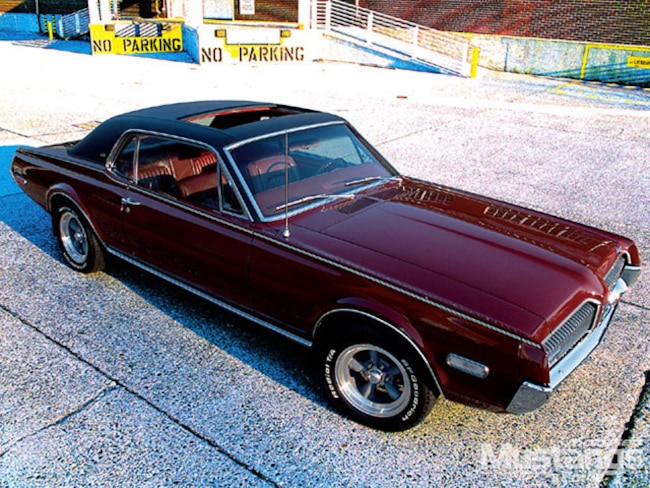 Ok, we're guilty as charged. Clearly, it's our addiction to horsepower, and love for the macho musclecars of the '60s and '70s that drives much of the content you see in the pages of this magazine. In case you hadn't noticed, we're absolutely nuts for big-inch displacements, engine swaps, upgraded suspensions, big brakes, and so on. We also believe most of you share the same school of thought, which all boils down to the guiding principles of go faster, and faster, and faster.

But every once in awhile, we come across a car that makes us rethink our priorities, and Susan Benoit's '68 Cougar is a perfect example. This XR7 is the epitome of Lincoln-Mercury's entry into the ponycar marketplace. so uniquely appointed, it couldn't be mistaken for any other. we've chronicled how Cougars were occasionally ordered with true musclecar powertrains, yet the vast majority were more like you see here-modest small-block V-8 power and a clear emphasis on high-style and luxury. A good look around Susan's '68 helps you realize such a combination doesn't lack for appeal.

We first ran across this fine machine at the 2003 Mustang Roundup in Bellevue, Washington, where it was awarded "Best Modified Ford" of the show. It's not any one thing that blew us away, but rather that "just-right" combination of options, craftsmanship, and presentation that's hard to define, yet obvious to the eye.

Though this car is restored to the nines, it is driven during the summer months to major car shows in the Pacific Northwest, where Susan pairs it next to husband John's '70 Boss 302 Eliminator. After years of riding shotgun in many of John's restorations, Susan announced a desire to have her own Cougar early in 2003, then waited patiently for just the right opportunity. Such an opportunity arrived a few months later, when the couple made a timely call to Pat Hanson and inquired if she might consider selling her '68 XR7. A deal was struck, and Susan finally had a Cougar to call her own.

This XR7 doesn't fall into a classic musclecar or restomod category, so what makes it so remarkable? For starters, the quality of the restoration is outstanding, topped off by a sparkling basecoat/clearcoat Black Cherry hue from Brandon Huhtala at Automotive Images. Next, there's the terrific XR7 package with full instrumentation, floor and overhead consoles, woodgrain dash, and more. Another part of the allure is that big hole in the roof-a factory install we seldom see. According to Kevin Marti (www.martiauto.com), just 431 of the 619 unusual Dan Gurney-inspired Cougars sported this power sunroof by American Sunroof Corporation, while another 591 were installed in all other Cougar models, including just 265 XR7s. Regardless of the numbers, this is one very cool option, and a big part of Susan's initial attraction to this particular car.

Even before restoration commenced in 1995, John had long been the man turning wrenches for Pat Hanson as part of a regular maintenance and repair plan for her Cougar. This diligent care since 1972 left it a terrific restoration candidate. though you wouldn't consider it highly modified, it wasn't screwed together entirely stock either. At her request, John added factory air conditioning, with virtually every nut and bolt just like it was assembled on the Dearborn production line. While the accompanying compressor is a big part of the underhood view, other worthwhile additions come in the form of the cast aluminum Cougar valve covers and air cleaner. John mentioned the former are genuine XR7G pieces, while the oval air cleaner was available from Lincoln-Mercury dealers back in the day. Whatever the source, these bolt-ons add the right visual spice to an otherwise stock J-code 302-4V-the optional four-barrel small-block in the second year of Cougar production.

Rebuilt underpinnings include big-block GTE-spec springs and swaybar, lending a firmer stance through the corners than the original soft sprung luxury suspension. Classic American Racing Torq-Thrusts measure 15x7inches, and cover the stock power front disc/rear drum arrangement considered top of the line when this car was built nearly 40 years ago.

The powertrain in Susan's Cougar is not unlike thousands of other Mercurys built in the heart of the '60s. Sure, a 230-horse 302-4V engine, C4 Select-Shift automatic, and 3.00:1 geared 8-inch rear won't stir the hearts of the horsepower faithful, but it was plenty for those who originally checked off the order sheet, and it fills the bill for Susan just perfectly.

Consider the smooth-as-silk idle, low-maintenance V-8 power, and terrific drivability of this far-from-the-ordinary luxury ponycar. It makes us think twice about the need for speed, where expensive buy-ins, costly parts, and plenty of maintenance are often part of the picture. clearly, cars like Susan's are underrated by many enthusiasts, yet you'll hear no apologies from Susan for the period look, pure '60s technology, and lack of huge horsepower. Fair enough. No apologies necessary.