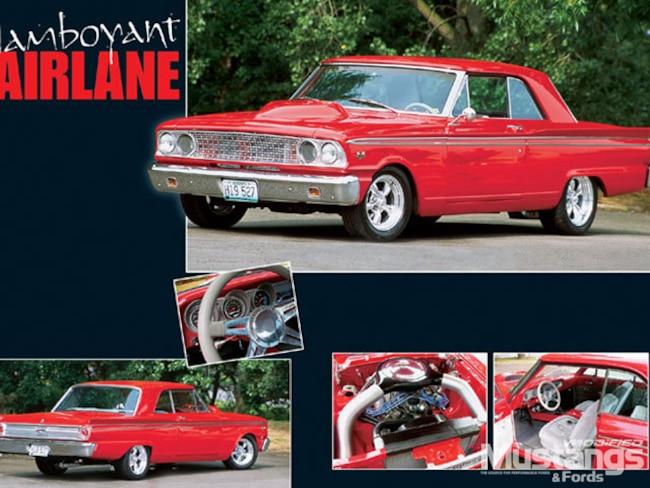 Mike Jackson stays pretty busy as a real estate broker, so when a buddy spotted an interesting '63 Fairlane 500 hardtop on eBay, Mike didn't have the time to do the bidding, but he did ask a friend to bid for him. By the end of the day, Mike was the new owner of the Fairlane, an original California car. The first owner, the proverbial little old lady, had the car for most of its life, so it was in great rust-free shape.

Even though Mike started with a clean and straight body, it took a lot of work to get the Fairlane into its current condition. The car was disassembled, and all bodywork was accomplished. After careful preparation, the originally white car was sprayed in Ferrari Dino red. A Crites teardrop hood, high-beam ram air intakes, and American Racing wheels contribute to the vintage performance look. The American Racing wheels, 15-inch in front and 16-inch at the rear, are wrapped with Bridgestone radial tires, 195/65/15 up front and 245/50/16 out back. Great detail work and beautiful chrome round out the early '60s beauty.

Under the hood, all wiring is carefully concealed. Artfully shaved shock towers make room for a 427ci Windsor engine filled with Keith Black pistons for a street-friendly 9.5:1 compression ratio. For induction, a Holley Avenger 770-cfm four-barrel carb is mounted on top of a Weiand intake manifold. The engine is force-fed by an impressive looking ram air arrangement borrowed from the Thunderbolt factory race cars. Running the valvetrain is a Comp Cams hydraulic roller cam with .533-inch lift at the valves. Topping off the stroked and poked Windsor are Ford Racing aluminum cylinder heads, which are equipped with Comp valvesprings and roller rockers. Exhaust gases are handled by a set of custom-made and coated headers dumping into a 3-inch exhaust system featuring Flowmaster mufflers.

Taking the power from the large displacement engine is a hardened C4 automatic equipped with a 3,200-stall speed converter. A B&M Quick Silver shifter with line-lock controls the trans, while the power goes rearward to a Ford 9-inch axle equipped with a nodular iron carrier, Traction-Loc differential, and 3.55:1 gears.

The interior was done in light gray with the original pattern. Auto Meter gauges are used throughout, located in the original openings in the factory instrument bezel. For those warm St. Joseph, Missouri, summers, a Vintage Air A/C was installed. Mike and his passengers can enjoy tunes from the remote AM/FM/CD unit in the trunk.

Although Mike's flamboyant and formidable Fairlane has a great look and an impressive list of amenities, we can tell by the no-nonsense engine that serious street performance was Mike's principal objective. He describes his Fairlane as "extremely fast." And we believe him.