Mom Gets An Eliminator For Her Wedding Anniversary 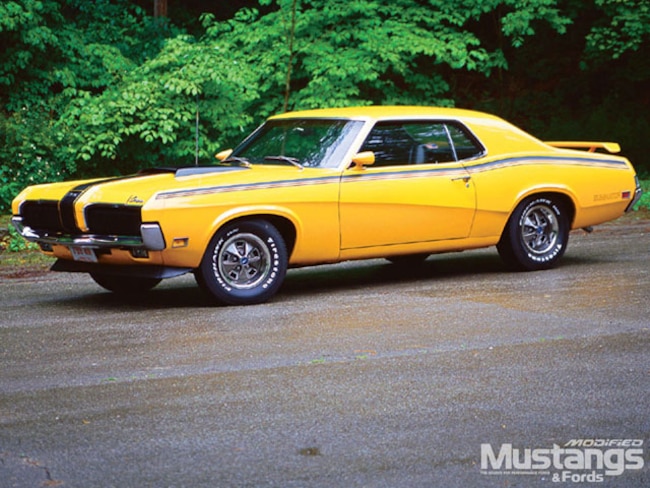 We've all seen the commercials for "the Lexus December to Remember sales event." You know the one-the dad gets a new Lexus via a model railroad car, or the husband puts the key in the face of a snowman for the nose. Though those commercials do tend to get us a tad bit weepy (and creepy, who does that for real-no mail, please), we find ourselves fantasizing it's not a piece of expensive Japanese crap, but instead, a slick piece of vintage-Ford iron. Well, Jim Mazuk of Millville, Ohio, did Lexus one better-he bought his wife a '70 Cougar Eliminator. And lest you think it's like the proverbial vacuum cleaner as an anniversary gift, his wife Brenda picked out the car.

Jim related how the Eliminator came to be theirs, "...I found a '66 Fairlane GT and was going to look at it on Saturday. Thursday afternoon a friend said I should give Rick Bryant a call to see if he wanted to sell his Eliminator. Brenda and I went to his house, and after about two minutes Brenda whispered to me, 'I love this car, let's buy it.'" Rick offered to sell Jim the car at a fair price, and, unbeknownst to Brenda, a deal was struck. Two weeks later the Eliminator was waiting in the garage with a big bow and an anniversary card on it.

From there, Jim, Brenda, and their son Cody put elbow grease and time into the car. Jim, like many of us, believes in making these kind of projects a family affair. Cody, who was 11 at the start of this adventure, was enlisted (willingly, we might add) to clean, bead-blast, and paint his way to joint ownership of the project. Cody is also the official awardee at events.

The Cougar is basically as it came from Mercury. Under the Competition Gold hood is a rebuilt 351 4V Cleveland, wielding an Edelbrock Performer intake, 600-cfm Holley, and an open-element air cleaner. Under that is a mild-performance grind cam from Ford Racing. All that is backed by a wide-ratio four-speed with stock Competition Plus Hurst shifter. Rear of that is a 3.50 limited-slip rear axle. Comfort and safety come along for the ride via power steering and power disc brakes. Inside the powerful cat is the Interior décor group, with its woodgrain appointments and zoomy rim-blow steering wheel. The tach dash, clock, and comfortweave seats are part of the standard Eliminator package. Also a part of this setup are the stripes (in black only for '70), styled steel wheels, as well as chin and rear deck spoiler.

As far was we can see, Jim is a pretty savvy gift buyer, netting a Cougar the whole family enjoys and a rocking ride that catches the eye of everyone who sees it. Hey, Jim, there has to be an anniversary coming up here at the office. think you'd mind helping out the old cause, bud? We'd like a... 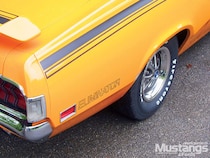 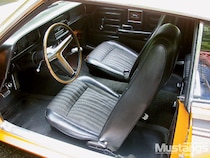 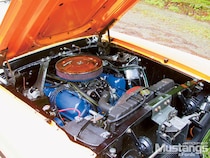 This 1970 Ford Mercury Cougar XR-7 is in excellent condition and is equipped with a Ford Boss 351 intake manifold. - Mustang & Fords