This XT Aussie Falcon Is Quirky By Our Standards, Too Right In Anybody's Book 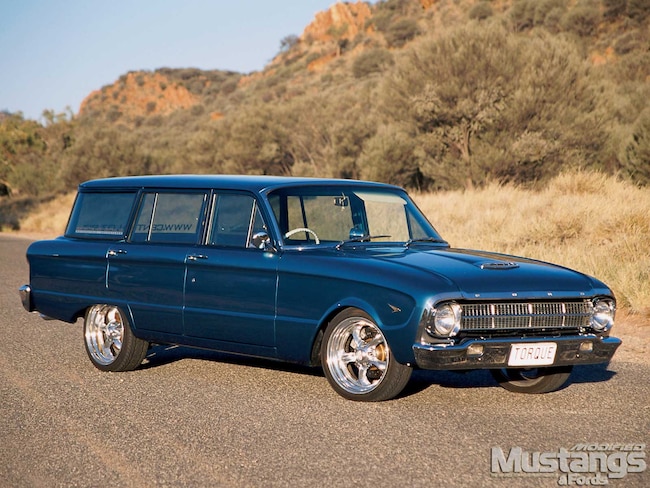 For some reason, I've had a soft spot for all things Australian since I was a kid. Perhaps it was Mad Max that did it. As a young fellow I fell in love with the "Last of the V-8 Interceptors" that was represented in a beefed-up XB Falcon. Whatever the reason, I have done my level best to keep up with what is going on Down Under via the publication Street Machine and through some of the fine folks from in country. That is where Ray Baney and Alan Bartlett come into this story. Both Baney, our intrepid photog, and Alan hail from Alice Springs, Northern Territory, Australia. If you look at a map, Alice Springs is out in the bush, some 1,000 air miles from Sidney-not the most convenient spot to build cars. But, somehow, Baney and his crew have managed to produce some hot-looking iron in the last few years. One such road rocket is Alan's '64 XM Falcon wagon.

Alan's car is somewhat unique, since it is his daily driver. He uses it to pick up tourists who fly into Alice Springs for his motorcycle tours. But a man like Alan can't leave well enough alone, and he's tweaked his ride to make it more to his liking-and ours. Unlike the U.S. falcon in 1964, the Aussie car wasn't available with a V-8. Instead, the baddest thing one could get was the 200 Super Pursuit straight-six-not exactly spirited performance with an 11 second 0-60 time. So Alan wanted to add a bit more go to amp up the power a notch. This was done with a Ford Racing 5.0L crate engine short-block that houses a B303 cam. Alan went old school on the heads and opted for the 351 Windsor C9OE castings with their larger valves and a port job. Other stateside perennials, such as an Edelbrock Performer intake and a Holley 600-cfm carb, made the short list. The made in USA list continues with an Accel dual point distributor and Crane high-energy roller rockers. Spent gases are sent on their way via a set of Tri-Y headers and local mufflers. Behind the 5.0 is an improved C4 with a shift improvement kit and B&M shifter. All that go is pushed out to a 9-inch with a 2.79:1 open rear-axle ratio. Alan soon plans to supplant that setup with a 3.25 gear. Stopping is done with local Ford disc brakes out front and Fairlane drums in back.

All that is well and good, but what sold the car was the awesome outside look. For the topcoat, Alan chose an Aqua Metallic in base clear, and then finished it off with a nice stock interior refitted in a two-tone Aqua. The only deviation from stock (inside, at least) is the pearl-white steering wheel. Another sell point was the Boyd Coddington 16x7 Smoothies mounting P205/45ZR-17 Dunlops, both front and rear.

We have to say, any day you can motor to work in a Falcon wagon like Alan's is a G'day indeed, mate. 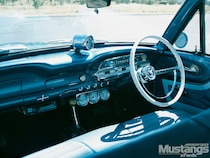 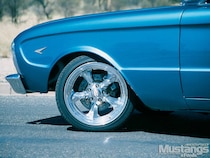 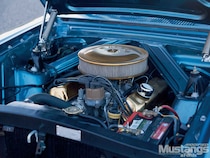 Dennis Payette purchased this 1964 Falcon Sprint for all the right reasons. Click here for more details or check out the June issue of Modified Mustangs & Fords Magazine