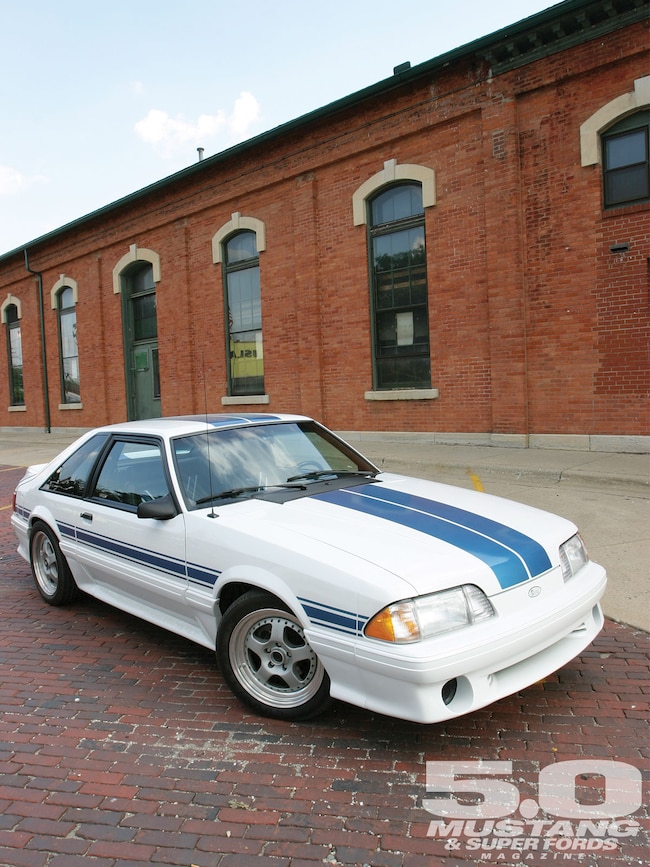 Magazines focusing on early Mustangs are all about Shelby Cobras, GT350s, and GT500s. Fast forward some 40-odd years and we're talking about Shelby Mustangs again with the latest GT500s.

No one can deny there's a certain mystique surrounding any vehicle wearing the Shelby name. These vehicles were not designed simply to get you from point A to point B, but to get you there as fast possible. For this reason, the early Shelby Cobras and Mustangs enjoy a huge following, and when any of them change hands, it takes a pant load to bring one home.

In the late '80s/early '90s, the Shelby American Auto Club's Ken Eber and Rick Kopec wondered what it would be like to resurrect that exclusive mix of performance and style for the current generation. The car you see here is the result of their daydreaming.

Ken and Rick wanted to build a current-generation Shelby GT350, but with Carroll Shelby still playing with front drivers from Chrysler/Plymouth division, they were unable to build a Shelby Mustang at that time. With Shelby's blessing, though, Ken and Rick started SAAC Car Company, and the '90s Shelby was born.

A key player in getting the SAAC cars to market was David Wagner, a SAAC member and manager of Ford's Power Products Operation Group. SAAC's version of Job 1 was built in the fall of 1991.

The first batch of SAAC cars were known as MK 1 editions, with its price coming in at $39,995. For that money, you received a Fox GT featuring an any-color-you-want-as-long-as-it's-Wimbledon-White top coat, with Guardsman Blue Le Mans stripes and side stripes.

To follow up on that tasteful exterior, the regularly ridiculed GT taillights were ditched in favor of cleaner LX offerings. Koni adjustable struts and shocks, along with lowering springs, brought the body down over Simmons three-piece wheels, 17x71/2-inch in front and 17x8-inch rear. Goodyear Gatorbacks were the treads of choice. By the way, those Simmons wheels are five-lug with brakes inside of them straight from the Ford Racing Performance Parts (Ford Motorsport at that time) M-2300 line of brake conversion kits.

The brakes weren't the only Ford Motorsport components destined for the MK 1. The engines received a GT-40 intake and heads; a 65mm throttle body; ceramic-coated, short-tube headers; underdrive pulleys; 1.6 roller rockers; and a Centerforce clutch. Since these components were available from the Ford Motorsport SVO catalog, the cars were able to carry a warranty. Most importantly, these add-ons helped the SAAC MK I develop 295 hp and 334 lb-ft of torque. Road tests from the day resulted in 13.6/98-mph quarter-mile times and 0-60 times in 5.2 seconds. Yes, we all know 5.0 LXs from the day were capable of touching the 13s, but in pure stock form, SAAC MK Is were almost a full second quicker in the quarter than box-stock Fox 5.0s.

Craig Stockard has owned this SAAC MK I car since 1993; he is the second owner. Craig tells us Ford dealer George Gorno originally bought the car but George wanted to trim his collection. Well, Craig just happened to be at the dealership one day talking to a sales guy, who mentioned the SAAC car in the back. The car piqued Craig's interest, and he took a look at it. "Two days later I was driving the car home," Craig says. He had an '88 GT at the time that he traded for the SAAC car, which had just 2,200 miles on it. As of this writing, it has 10,039 miles.

Craig says the Shelby American Auto Club built only four MK I supercharged cars, his being one of them. He also believes the introductory MK I cars were sold only to SAAC members, but MK II were for the general buying public. Either way, if you own or see one of these cars, just know they are super-rare.

This car almost went across the auction block, but the courier service was unable to get it to the auction in time. So if you're in the market for an SAAC car, this one just might be available.

After MK 1 production ended in mid-1992, the SAAC MK II entered the picture. Evidently, people wanted their SAAC cars in colors other than Wimbledon White because that's the most notable change from the MK I version. The MK II was available in black or red, as well as the introductory Wimbledon White. The black version featured the same stripe design, but in gold, while the red MK IIs received white stripes. The other big news was that you could get a MK II convertible version as well.

During the midst of the MK II production, there was demand for an AOD-equipped SAAC offering. The only problem was, no one thought the AOD would be able to handle the extra horsepower brought to the table by the GT-40 engine package.

They were probably right, and the SAAC guys didn't want a bunch of warranty claims on their hands due to failing transmissions. The fix was to offer a stock-engine SAAC car, which came to be called the SAAC Snake. The Snake would be equipped with a stock 225hp 5.0 engine. Problem solved, right? Well, yes and no. SAAC answered the call for the click-click crowd, but not a single person ordered an AOD-equipped Snake. SAAC's efforts were for naught.

SAAC planned to build 250 cars but only 65 were built. Of the 65, 11 were Snakes, which includes eight hatchbacks and three convertibles.

There are reasons why SAAC cars didn't make production. First, the cars were hand-built, which took time, and they were expensive. When you could buy a GT or LX for less than $20,000, the SAAC cars were roughly twice that amount-a hefty premium for sure.

Another factor for the limited production numbers was news of the '93 Cobra, which featured many of the same GT-40 components as the MK I and MK II models at a cheaper entry price.

However, if you do own a SAAC car, you are in possession of one of the most highly sought-after Mustangs ever produced. These are among the more exclusive Fox Mustangs.

While they don't yet enjoy the cult following of Saleen models of the era, seeing an SAAC car at a Mustang event or show is like seeing a unicorn in a horse race. You know it's a Mustang, but you definitely know it's different than the rest of the stable.