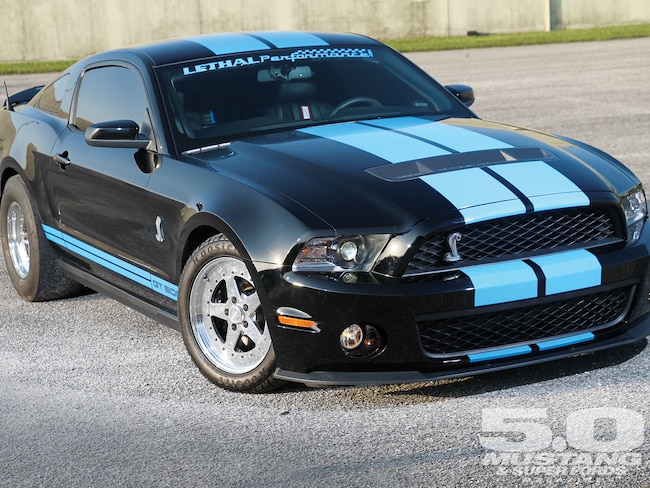 In becoming one of the go-to purveyors of Mustang performance gear, the gang at Lethal Performance endeavored to spread its gospel in several traditional and non-traditional methods. On one end, they advertise in old-school print magazines; on the other end, they've sponsored mixed-martial-arts fighters. In the middle, they know exactly where their bread is buttered, which is with true enthusiasts, and there's no better way to attract power-mad enthusiasts than with high-powered project cars.

One such success was the company's '08 GT500 project car, which helped Lethal launch its brand as one of the go-to sources of mail-order muscle for the S197 crowd. The Shelby was a sequel to a Terminator Cobra that flashed its fangs for the New Edge crowd. Having pushed the '08 into the 10-second zone with a substantial list of bolt-ons, headlined by a 3.4-liter Whipple supercharger, the stock engine finally tapped out during a 10.54-second pass. This presented the obvious crossroad, which usually calls for more mods.

"In 2009, when racing our Whipple-powered '08 GT500, we blew up the motor on a 10.54 pass. Our plan was to build a motor and have the car ready for the Bradenton NMRA season opener. Delays with parts kept us from being able to participate in the event. At the same time, images started surfacing on the Internet about the new '10 GT500. I knew the moment I saw it that I wanted one," Lethal Performance's Jared Rosen explained. "So without hesitation, we placed an order for a black-with-Grabber-Blue-stripes '10 GT500 from Philip Weikert at Weikert Ford in Lake Wales, Florida. During the time the car was on order, our engine was finished and sat in our warehouse on a pallet. We replaced the blown motor in the '08 with a low-mileage '07 motor and sold the car to a customer of ours in Kuwait."

The plan was to fearlessly fuse the new engine with a brand-new Shelby. "Our 2010 arrived and the plan was to do a step-by-step build, which would allow our customers to see what could be done with the car with basic bolt-ons," Jared explained. "At some point though we knew that the built aluminum motor by Al Papitto would find its place in the 2010 along with one of Whipple's newest blowers. After testing the car with a tune and a few other suspension modifications we started the build. It happened pretty quickly actually. The new motor went in, the suspension, fuel system and everything else we all done at once."

Long one of Whipple's staunchest supporters, Lethal was to once again revisit the massive 3.4-liter twin-screw supercharger, but as the project progressed, a bigger version became available. Lethal was the first to try it out on the company's '10 project.

Yes, the superchargers seem to get larger and larger, and the latest was displaced as much or more than a base Mustang's six-cylinder engine. Clocking in at 4.0 liters, this Whipple also featured an ultra-high-flow inlet, dubbed the Super Crusher, which featured a matching single-blade throttle body. 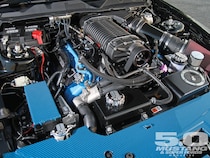 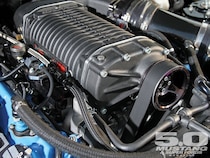 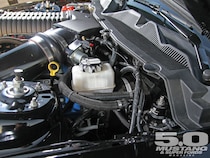 If you followed our buildup on this car back in the June 2010 issue ("The Bravery," p. 80), you know that the results of the marriage of the Boss 330 5.4 and massive Whipple spun the dyno rollers at UPR Racing to the tune of 805 hp and 673 lb-ft of torque. Of course, the dyno was only part of the testing procedure. Lethal planned to earn its cred on the dragstrip. Naturally, it's not as simple as just bolting the combination together.

"After the build was finished and the car was custom-tuned by Jon Lund of Lund Racing, we made a visit to the track. Our first time out, we ran a low 10 but experienced some issues," Jared said. "After a little poking around, we ended up replacing the alternator and made another visit to the track. That was when Jeremy cracked off our first 9..."

Jeremy is none other than UPR's Jeremy Martorella, an experienced drag racer and professional sunglasses model, who was kind enough to lend his mastery of the manual trans to the Lethal cause. He also lent quite a bit of the suspension-tuning knowledge he's learned from the likes of Billy Glidden to help hook up the 5.4's massive power at the track. The combination of Jeremy's suspension tuning and driving paid dividends in the form of a milestone achieved-the first 9-second '10 GT500.

"Another few weeks went by and another trip to the track yielded us our quickest run so far, which was a 9.66 at 146.19 mph. All of this basically put us on the map and earned us some good street cred in the GT500 community," Jared added. "Not bad for some 'parts guys' in south Florida.

"At this time we've made a few changes to the car. Most importantly we've switched over to E85. We're looking to raise the boost to make more power and crack off an 8-second pass with the stock TR6060 six-speed." If that goal weren't lofty enough, the Lethal crew recently acquired a Grabber Blue '11 Mustang GT, and they're looking forward to pushing the Coyote-powered Pony to new heights as well.

We know where this is headed. Another Mustang is going to take a beating in the name of performance, and we're going to love every minute of it.