SVT Livens Up The '11 Shelby GT500 With The Performance Pack 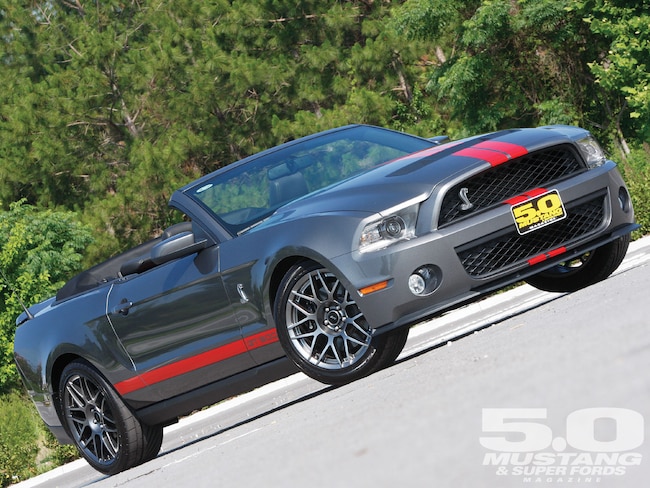 When the modern Shelby GT500 entered our consciousness, we were instantly smitten by the thunderous supercharged engine. For us, it made it much easier to overlook the foibles of its plush suspension and stuttering clutch take-up. It was a bigger, better, retro version of the Terminator we so loved, and we just knew that it would be eagerly embraced and enhanced in the aftermarket.

Obviously, that's just the way it played out, but it's not only the aftermarket that polished the facets of this rock-rough boulder into a gem. No, Ford's Special Vehicle Team built a solid foundation with the car, and engineers knew they could improve its capabilities on many levels. They did just that with the '10 model, which offered a quantum improvement in handling, driveability, and power.

We've had to slowly condition ourselves that it is possible for engineers to continually make these cars better, which brings us to the '11 Shelby GT500. It's not quite the leap from '09 to '10, but in its Performance Pack dress-which is the only version we've had the chance to sample-the '11 model expounds on the strides of the '10, yet engineers told us there's still plenty of "low-hanging fruit" from which to make future improvements.

What the '11 Shelby GT500 will most be remembered for is the move to the aluminum 5.4 block, which enthusiasts have called for since the moment the car was introduced. Knowing the Ford GT had such a block and the GT500 made due with the iron-block was just too tempting. Give credit where's its due, as SVT Chief Nameplate Engineer Jamal Hameedi made mention of the wild exploits of twin-turbo Ford GT owners as a reason for moving to the improved-version aluminum 5.4 block. His reasoning was based on those cars reliably supporting over 1,000 hp at the wheels with a stock aluminum 5.4. He explained that this should give SVT plenty of room to grow should another manufacturer want to engage in a horsepower war.

Many hard-core enthusiasts converted the GT block for use in their GT500s, but Ford took that swap a few steps forward with its efforts. Most obvious among the improvements in the aluminum-block are its new cylinder liners. Supplanting the heavy steel liners are liners created with Ford's proprietary Plasma Transferred Wire Arc technology, which works in concert with a unique cylinder machining. The block is machined in an alternating pattern so that the 35,000-degree jet of melted steel covers the peaks and valleys, and hardens into an interlocking fashion for maximum durability. In result, the cylinder liner is lighter and smoother than a traditional sleeve, which contributes to the engine's efficiency and 102-pound diet.

"Ford's Global Research and Advanced Engineering looks to all industries for advanced technologies, and this comes from aerospace. It's the same technology you would find on aircraft engines," said Glenn Jorgensen, SVT Powertrain Team leader. "We've invented a coating as a replacement for cast-iron that delivers improvements in power, performance, and fuel economy."

Aside from the block, the 5.4 is familiar in construction, but it also benefits from external upgrades like Electronic Power Assist Steering. The EPAS is already familiar to us in its transparency. It's impressive that the EPAS delivers just the right heft and precision, but doesn't leave you longing for a power-steering pump. In fact, the SVT engineers said their work on getting the steering just right for its high-performance package resulted in hardware improvements that benefitted the GT and V-6 Mustang, where we also found the EPAS a delight.

While EPAS undoubtedly freed up a couple ponies, the SVT engineers credit most of the power boost to the 0.25-inch up-tick in exhaust diameter to 2.75 inches. We know from experience with aftermarket exhausts that jumping up the pipe size is definitely good for a power boost, even with the catalytic converters. In fact, the SVT guys say getting the big cat helps with both emissions and backpressure reduction. All told, the backpressure reduction dropped by nearly 40 percent, while the new pipes and mufflers deliver a big more authoritative sound.

As we have come to expect, SVT engineers didn't rest on their powertrain upgrade laurels. They followed a familiar protocol in retooling the suspension and chassis, as they built from the ground up, starting where the rubber meets the road. "These tires are as close as you can get to a race-car tire. We have a tire that's way more capable with better grip, and is firmer and more race-oriented. From there, we tuned the chassis around it. The tires told us what we had to do," Eric Zinkoksy, SVT technical specialist, said of the Goodyear Eagle F1 SuperCar G2. "We took some lessons from the Shelby KR program and applied them to these tires. That was our first attempt at a similar compound and we learned a lot, and rolled those lessons into the new Shelby to provide an even better tire."

With a road-gripping tire underfoot, SVT engineers tuned the shocks, springs, and sway bars to work with the new tire and drastically improved weight distribution. "The SVT team continues to push the performance standards of the Shelby to even higher levels and better refinement," said Jost Capito, director of Global Performance Vehicles and Motorsports Business Development. "All the changes we made reflect a desire for even better handling and outstanding driving dynamics-from weight savings and improved balance."

In practice, we couldn't agree more. Turn the key and the GT500 emits a pleasant, throaty rumble to the rear. Quiet by our standards, because SVT's engineers strived to reduce road noise by a whopping 20-percent. Sadly that also means the supercharger whine seems further dampened in the cabin, even when the 5.4 is ripping at full song. Before getting to that point, the tweaks in the car's clutch and even the car's footbox resulted in a clutch feel that's a bit more apparent than the '10 version, but glass-smooth compared with the '09-and earlier-variant. Naturally, the 3.73s in the Performance Pack are a happy addition that get the car moving and keep it in its comfort zone, riding 80-percent of its torque from 1,750 to 6,250.

On track at Virginia International Speedway, we were able to make single laps in both standard '10 GT500s and '11 GT500s equipped with the Performance Pack. It would have been illuminating to have an '09 there too, but the '10 proved a good baseline. Under my clumsy control, I quickly found the edge with the '10. Upon swapping into the '11, I tried to maintain that first-time-on-the-track pace for the first lap or slow, then increase speed. As expected, the edge was further out with the '11, and it exuded more confidence on track. There's nothing like having the car rolling under full boost and suddenly reeling things in under braking, and have the car just do it without complaint.

We also couldn't complain about our duty upon leaving the track. From lapping VIR in coupes, we shifted gears to road-tripping in a convertible from Virginia to Florida. Stepchild no more, SVT engineers promised the convertible was as good as the '10 coupe from a chassis-rigidity standpoint, and when equipped with the Performance Pack, it certainly didn't seem to give up any handling either. More impressive, the car really doesn't give up much ride quality. After several long stretches in the driver seat, we weren't clamoring to get out from behind the wheel.

Sadly, getting out from behind the wheel came sooner than expected. Not surprisingly, the latest GT500 is a tough habit to break. Lighter, more agile, and ready for street or track, the Performance Pack Shelby sets a lofty bar for its descendants. We look forward to seeing how they stack up.

On The Dyno
Dynojets are remarkably repeatable unit to unit, so we really only had to factor in the differences in weather conditions

Having had a '10 GT500 on the dyno at VMP Tuning (www.vmptuning.com) last July, we thought it was worth comparing to the '11 GT500 to see how that extra 10 hp at the flywheel translated. We didn't get a chance to get back over to see Justin Starkey at VMP again, but we do have our own shiny new Dynojet (www.dynojet.com) chassis dyno here at 5.0&SF world-domination headquarters. As such we dyno'd the car in our shop and sent the file to Justin so he could put the '10 pull on the same graph as the '11 pull.

Dynojets are remarkably repeatable unit to unit, so we really only had to factor in the differences in weather conditions. We use SAE correction, which can compensate for some differences, but our barometric pressure was pretty low at 29.54 in-hg versus the 30.19 in-hg the 2010 ran in. As such, our boost was probably impacted, but Justin said the correction could have been a little aggressive with that baro. We'll chalk that up as a wash, as the uncorrected numbers on our pull were only a few ponies higher. Our '10 GT500 also ran in warmer more humid conditions, so this isn't pure science, but it does show the latest car is packing a little more muscle underhood. Perhaps it's even more than 10 at the flywheel ...