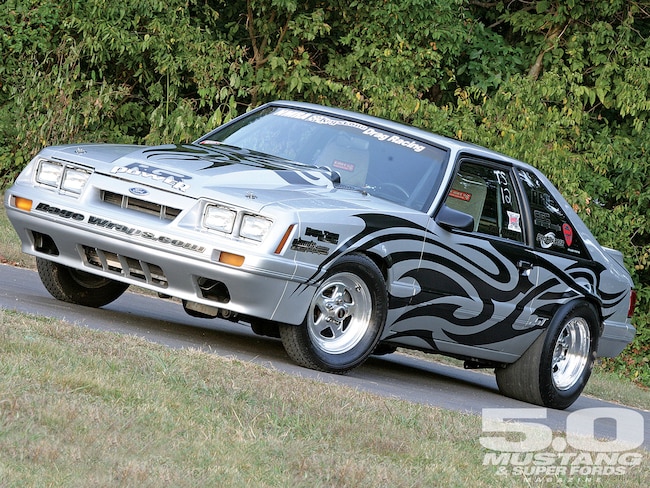 Horse Sense:
In addition to building and campaigning this car, and maintaining his business, Phil Delaney also heads-up the IMSM Racing Series. The IMSM features a host of index classes aimed at creating an even playing field for a variety of cars and combinations. Races are held during the summer months in the Midwest from Byron and Cordova, Illinois, to Great Lakes Dragway in Union Grove, Wisconsin. Besides racing his '86 GT in the NMRA's True Street class, Phil races in the IMSM's 9.50 Pro Tree index class.

Rage Against the Machine is one of my favorite bands thanks to a unique, hard-hitting, soul-stirring sound. However, lost in the band's riff-heavy tunes and anger-spawned lyrics that made you want to kick someone's teeth in, Rage's message was to fight against "The Man," or "The Machine." Rage was one of the few rap-metal bands attempting to inform people about the injustices of this world. Rage encouraged us to not become part of the machine, but to help us think for ourselves and not simply conform to what big government wanted us to be.

As part of this magazine and enthusiast base, we're a part of a different machine, but one aimed at doing well. We try to keep the cogs of this machine going in the right direction, and one person helping to keep it going is Bartlett, Illinois' Philip Delaney. Instead of writing about cars all day long like we do, Phil uses his creativity to give cars a new exterior identity by way of his company, Rage Wraps. "I have always loved art and cars," Phil says. Starting Rage helped Phil to combine his loves.

Specifically, Phil's more into Mustangs, but that shouldn't be a big surprise since you're reading about him here. Phil had a 10-second '89 GT with a ProCharger, but when that car was damaged in an accident, he was back to square one. The '89 was Phil's second Mustang, and he learned a lot from owning that car. Starting over lead Phil to a clean '86 GT roller with a lot of potential. After looking at the car on several occasions, Phil brought it home and got to work.

"The car was special to me. I have always been a four-eyed fan, considering my first Mustang was an '82 Mustang GT that I bought when I was 13," Phil says. Phil knew the '86 was his chance at doing something big, so he called his buddy Rich Groh at Rich Groh Racing Engines. Phil had a 351 Lightning block and asked Rich what could be done. Of course, as with anything to do with making power, Rich had the answer, but more on that later.

In the meantime, Phil, his brother Dustin, and dad Robert, had plenty of work to do on the car to get it ready for Phil's goal of single-digit quarter-mile timeslips. A lot of work was needed to bolster the car and Phil's knowledge of drag racing. "Everything on the car other than the cage was done by our hands," Phil says. Dustin is the wiring guru of the family so he was enlisted to wire the car. That and Phil hates wiring so it's a good thing Dustin can make magic with a spool and wire strippers.

Throwing a wrench into the car's build was Phil's sudden desire to start Rage Wraps. "Starting my own business was important to me," Phil says. He couldn't have picked a more inopportune time to start Rage Wraps, but why make it easy! "Rage Wraps was an idea I had where I can combine my love for vehicle art and apply it to help racers become a marketable entity," Phil says. That statement has us convinced. However, taking time to build the business took time away from building the '86, but he had the chance to travel with the NHRA, NMRA, IHRA, and other sanctioning bodies to help spread the word. These travels gave him even more desire to get the '86 done so he could become a part of the performance machine.

During this time Rich Groh had plenty of time to work with the Lightning block Phil had supplied. Rich turned the 351 into a 383ci thanks to a 3.75-inch stroker crank, and a 0.030-inch overbore. Making the most of the cubic inches, Phil returned to ProCharger for one of its D-1SC superchargers. DynotuneMP's Mike Post provided a base tune, and on the dyno the combo made an easy 715 hp at the feet.

Speaking of feet, building the car and getting the business on its feet, Phil had tremendous help from his family to get the car done, but the graphics were up to him. He wanted a simple look for his car, but one with high contrast at the same time. In the end, this simple flat-black-over-silver scheme gets the job done.

The car made its public debut at the NMRA/NMCA Super Bowl at Joliet in 2008. It wasn't in fighting shape, but it was there. It wouldn't be until the NMRA World Finals at Bowling Green that Phil would be able to make his dreams come true. Competing in True Street, Phil made the cruise with no problem, but he made a rookie mistake by not tying down a line to the map sensor (If you need any tie-wrap tips Phil, let me know!-Johnson). The result was the line came loose at about the 1,000-foot mark and the car did a nose dive. However, it still ran a 9.65 at 130 mph. "A far cry from where it should have been," Phil says.