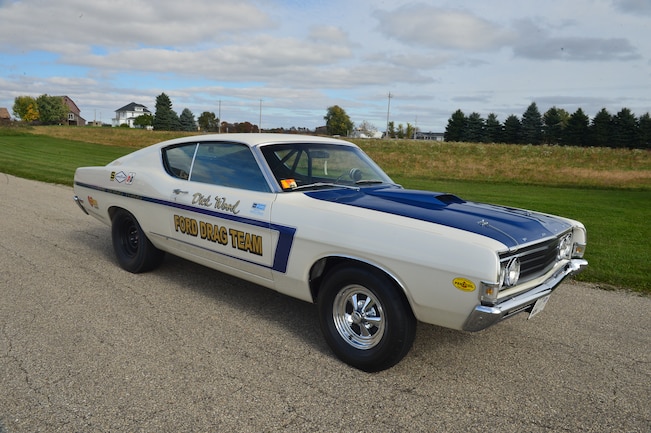 Bob Perkins first heard about Ford's 1969 Drag Team Fairlane Cobra, driven by Dick Wood for Ford's West Coast team, 27 years ago. Perkins explains, "In 1989, Rick Radke was out in California buying a big literature collection. He went to Mark Hefty's shop, and Mark had the big Cobra sign, dated 1964, that hung over the Shelby-American plant."

Radke lives near Perkins in Wisconsin. Radke wanted to know if Perkins wanted to "go halves" to buy the Cobra sign. He didn't hesitate. Yes, this was the sign that actually hung over the historic Shelby-American plant in the 1960s.

Perkins eventually bought out Radke's half of the sign, which he kept until recently, when he traded the sign to his friend, Richard Ellis. "Ellis has the most famous 427 Cobra there is," says Perkins. "It's the only Comp Cobra they made in 1965. I'm thinking, I've got the sign that hung over the Shelby plant. That sign needs to be hanging over Ellis' Cobra in his showroom."

Ellis had something Perkins wanted. Through his own collector dealings, Ellis had come up with the same Ford Drag Team 1969 Fairlane Cobra that Radke saw in Hefty's shop a quarter of a century earlier.

The Fairlane Cobra was apart for a restoration, but rust free. Incredibly, Perkins traded the sign he and Radke bought from Mark Hefty for the same historic Fairlane that Radke saw in Hefty's shop, and which Hefty owned, in 1989.

Perkins had a restoration job ahead of him, but that's OK. He owns his own business restoring Mustangs, particularly of the Boss persuasion. Of course, he also likes other Ford muscle cars.

Perkins didn't stop with the acquisition of the car. He took a trip to California to meet with the family of Richard Wood, now deceased. There, he got numerous items of memorabilia to enhance the enjoyment and history of this very famous Fairlane (which is not a Torino).

What Perkins really liked about the Fairlane was the Ford Drag Team lettering on the side, which leaves no doubt to the factory heritage. Yes, other Fords had sponsorship and a factory lineage, such as the famous "dollar" drag cars. However, did Ford intend for the dollar price to transfer both ownership and liability to the team operating outside Ford?

In contrast, the four Mustangs and two Fairlanes were the Ford Drag Team. There was no external team. The factory was the team, with racing and other activities administered by "Car Corporation" directly for Ford Motor Company.

Wood Family photoIn his driveway in Fremont, California, circa 1971, Dick Wood stripped the Ford Drag Team logo and paint scheme/stripes from the Fairlane. Ford had ended the drag program, and specified no logo be left when racing in private hands.
Wood Family photoWood repainted his Fairlane Cobra blue. His son, Rick, built another 1969 Fairlane to drag race.
The Ford hauler with the Dick Wood 1969 Fairlane Cobra and one of the Mustangs was an impressive sight, as seen in this old photo. With their truck and cars and uniforms, they won best-appearing team at the Winternationals in 1969.
This vintage photo shows the Fairlane displayed at a car show. The sign proclaims the car a national record holder at 11.49/120.16.
When the Ford Drag Team split up, Dick Wood gave his racing helmet to his son's best friend. Perkins tracked down the friend and bought the helmet. "He said Dick Wood was like their hero. He used to take the kids to the boy's club in the hauler truck with the Fairlane on the back."
Ford promoted its drag team with press kits. This kit came from the Wood family. They stapled four historic Richard Wood cards to the kit: two NHRA membership cards and two Ford Drag Team business cards.
This jacket commemorated one of Richard Wood's 1969 class wins. Perkins got the jacket from the Wood family.
This the jacket Richard Wood wore from his local dragstrip back in the Ford Drag Team days.

Join Mustang & Fords Magazine for a feature on Ed Putz and his two vintage Fords, a 1969 Fairlane Cobra & 1969 Torino GT.