We Drive the 2019 Mustang Bullitt, and it is Good! 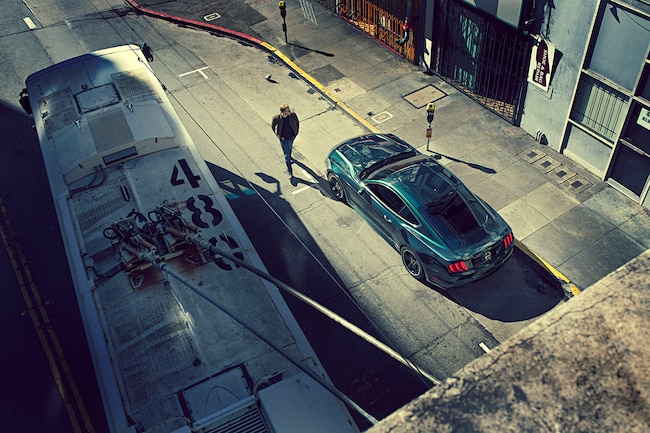 A lifted Ford F250 filled the entire rear view mirror of the 2019 Bullitt Mustang we were driving as we tipped onto the aptly named Panoramic Highway between Cavallo Point Lodge and Stinson Beach, California. We were boxed between the BroDozer and a minivan wearing Colorado plates that might have been looking for nearby San Francisco. Ford had handed us the keys to the hero car along with a map of six shoot locations from the original movie and directions to the curviest road they could find. Before the tourists could kill the buzz, the Universe guided them onto the last turnout before the hill, we downshifted to Third and were surprised by an automatic rev match. Dropping it into Second, it was time to focus on the road.

"Motor racing is a blood sport," Steve McQueen said of his passion before he died of mesothelioma in 1980. It was a feeling McQueen tried to bring to each of his movies, and when there were cars involved, he was hands-on to make the part the cars played as authentic as possible. Modern movie experts agree when you ask them; CGI action is less effective. A guy driving a Mustang hard on camera is much more visceral. The Bullitt celebrates the 50th anniversary of the movie where McQueen, acting as his own stunt man, chases a black Challenger up and down the hills of San Francisco in a crossmember-smashing 12 minutes of hard-core thrashing of a couple of street cars. As we let the exhaust roar, then pop and complain when we slapped the throttle closed to focus on the next hidden apex, we were getting the feeling that the engineers at Ford had engendered this in their third and latest version of the Bullitt. This car wasn't a badge package, if fact, there are no badges at all. With a nod to the original movie car, there is a bull's eye reticle on the rear facing faux gas cap, and a list of performance mods, but nothing more.

Our Bullitt was Dark Highland Green, like the 1968 Fastback was in the movie, but you can buy it in Shadow Black like the 2001 and 2008-09 Bullitt (there were also a few in blue here and there), and it has another reticle on the steering wheel so you remember what you are driving. That is where the salad ends. The meat and potatoes is under the hood with 480 (20 additional) horsepower and 420 lb-ft of torque that wasn't found with cam timing or compression boosting. Instead, there is an open air box so you can hear the 5.0L V8 pull to the 7,500-rpm redline, combined with the intake from the GT350 and an 87mm throttle body. It doesn't want you to lift, it wants you to throw the big white cueball shift knob around and go peak-to-peak with the proper "I am a racecar driver" sense of power. We tried to channel our inner rebel as we stabbed and steered as hard as we could to get the tires to sing or the chassis to balk, but it was beyond us on a public road with only an hour's worth of seat time. Sports car guys will find the limit, but as muscle car owners, this car is a couple of steps above what we are used to.

To get the Bullitt to handle and stop, Ford added bright-red six-piston Brembo calipers to the front brakes with larger rotors and 19-inch wheels that look similar to the movie car's Torq Thrusts, but painted black "so they disappear." These bits are part of the larger GT Performance Package that utilizes performance front springs and the optional MagnaRide damping system. Our car had 255/40ZR19 Michelin Pilot Sport summer performance tires.

We didn't see the F250 again until we had completed the loop and stopped on the return route for coffee and photos. Even though we were in a small town isolated by a two-lane coastal mountain road, Mustang guys materialized to check out the goods. Our Bullitt had the optional electronics package that includes a 12-inch LCD instrument cluster instead of traditional gauges, although there is an oil pressure and vacuum gauge on the center of the dash so there are sweeping needles to watch. Other Bullitts on the route had Recaro seats, another $1,595 option. It also featured the touch-screen navigation and sound system with SYNC 3, but we didn't turn it on. We did play with the Track Mode option that opens the exhaust for more music and changes the instrument cluster to display a huge horizontal tach readout and/or a g-meter. Track Mode also engages the line lock/launch control if needed. The queball leads to a six-speed Getrag transmission that is quick-shifting with electronic rev-matching without any of the ghosts of this transmissions past. Don't worry, there is a Torsen limited slip back there if you are into oversteer.

Overall, this is a sorted GT Mustang that leaves out the fins and flippers and includes the driver's parts we like. It's fast, and low, attractive enough with its black honeycomb grille and GT aero splitter to get the good attention, and electronic enough with traction control and confident handling to avoid the bad. The base is $46,595, and our Bullitt was $51,385. We'll take one in Shadow Black.

Steve McQueen would have loved a drive in the 2019 Mustang Bullitt. We know we did!

The very first example of the 2019 Ford Mustang Bullitt has sold at the Barrett-Jackson Scottsdale sale for $300,000, and all that money goes to charity.