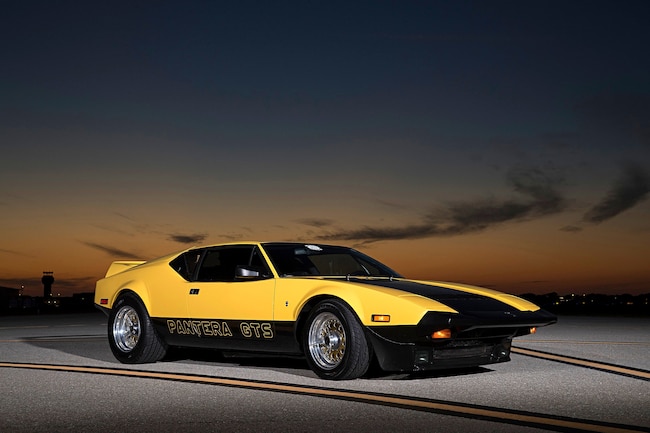 Like every red-blooded lad coming of age in the 1960s, Joe Curley was obsessed with all things automotive. "I grew up in Chicago's South Side, and by the time I secured a driver's license, I was already bitten by the hot rod bug," he remembers. "I was tinkering with engines and helping anyone who would let me hang around, as I didn't have my own car, and I got an on-the-job, school-of-hard-knocks learning experience."

Curley's love of fast cars eventually led a spot on a racing team run out of Chicago's Clements Speed Shop. "I had the great experience to pit on the team's short-track and long-track cars and actually got to drive the dragstrip car when we were not out of town on the racing circuit. My racing experience lasted several years, but then I realized I needed to get a real job."

Curley found his way into the public relations and communications field, and over a span of years, built up a very successful agency. Though Curley had to step away from cool cars as he invested a great deal of time, energy, and focus into growing the business, his deep-rooted passion for the hobby never diminished. As a child, he gravitated toward Ford, and that hasn't changed over time.

"I was always particularly attracted to Fords, which is ironic because my best friend growing up, Jim McCulloch, loved cars as much as I did, but he was a Chevy guy!" Curley says. Sometimes they raced against one another at their local Chicago-area dragstrips, but the friendly competition only served to strengthen their friendship. When Curley left the Windy City in 1971 for warmer waters in Florida, their friendship endured, with each frequently visiting the other over the years. In 1980, undoubtedly influenced by his pal's predilection for Fords, McCulloch bought a 1974 De Tomaso Pantera GTS with the goal of turning it into a wickedly fast, twin-turbo showstopper.

The project began with a complete teardown and chemical dipping of the body shell. Then the body, suspension components, and virtually everything else that attaches to it was painted, polished, or plated to the highest standards. Moderate but effective fender flares were added at all four corners to provide added tire clearance. Critical areas of the chassis were reinforced or re-welded, and the sheetmetal surfaces and panel gaps were massaged well beyond original factory specifications. Everything was then coated in not-so-subtle Pantera Yellow. Additional body modifications include European tailights and front parking lights, custom air scoops in place of the stock side-quarter windows, and a fiberglass front bumper with an integral radio antenna. One particularly clever addition is a pneumatic setup in the front that allows the driver to lower the front air dam for high-speed runs and then raise it up 2 inches to give needed clearance when navigating speed bumps and steep driveway aprons.

Five years later, with the project about 80-percent finished, McCulloch sold the Pantera to Curley, and by the end of 1986, he completed all of the work. "Of course, as any car guy knows, a vehicle like this one is never really finished, and I continued to make changes to it over the years. It underwent a complete refresh in the summer of 2011."

Propulsion comes from a 351 Cleveland fitted with twin side-mounted AiResearch turbos, ported open-chamber heads, and a Gilmer beltdrive system for the water pump, A/C compressor, and alternator. The engine's internals were all selected for durability, including TRW pistons, a Comp camshaft, Rhoads lifters, and a Melling oil pump. The stock crankshaft was dynamically balanced and received a Tuftriding treatment. The intake manifold was hand-fabricated, and a Carter 7.5-pound fuel pump feeds the engine's modified Holley 780-cfm carburetor, which has vacuum secondaries custom-tailored to work with the turbo-boost curve to diminish lag. Boost can be controlled by the Turbonetics Delta adjustable wastegates with a controller mounted within easy reach on the shifter console, allowing the driver to adjust the boost from a low of a couple of pounds to a high of 14 pounds; the console also has a knob to adjust the ignition timing. The engine's waste gases are channeled to custom 3-inch pipes via hand-fabricated exhaust manifolds, and the entire exhaust system is silver ceramic-coated.

Panteras are somewhat notorious for running hot, even in the best of circumstances, so Curley knew he'd have to go to the extreme to keep his twin-turbo beast cool. The 3-inch Phoenix aluminum radiator incorporates one pusher fan and two puller fans on either side. That, plus sizeable louvers in the sheetmetal behind the transaxle, all work together to keep the engine temperature reasonable, even on the hottest Florida summer days.

On a dyno, the engine produced 680 hp with 12 pounds of boost, which is more than enough brute force to propel this car to a terminal velocity approaching 200 mph with the 4.09:1 gearing in its ZF five-speed transaxle. A Centerforce dual-disc hydraulic clutch system and aluminum flywheel get the engine's power to the gearbox. Heavy-duty U-joints and axleshafts complete the drivetrain. Heavy-duty JFZ brakes, with 12-inch front and 10-inch rear rotors and polished calipers, replace the stock system.

The car rides on custom-made, two-piece modular knock-off wheels from Hall Pantera. They measure 15x10 inches for the rear and 15x8 inches in front. Hankook Ventus tires sized at 295/50R15 in the rear and 225/60R15 in the front fill the wheelwells, and adjustable coilover shocks are on all four corners

The interior retains the stock layout and ambiance, but features a number of custom touches. One change that's not easy to spot at first glance is the 3-inch dropped floorpan, done to accommodate Curley's taller-than-average frame. At the other end of the spectrum is a very-easy-to-spot custom Lexan bubble between the seats. This unusual piece provides a great view of the engine, in all of its polished and plated glory. Custom Connolly leather seat covers and matching door panels blend seamlessly with the Pantera's original dash and other soft trim, and a pair of boost gauges (one on the dash and one on the driver's door "for added visibility") augment the original Veglia Borletti instrumentation.

After the car's completion, Curley took it to the track for what he calls "a few cautious runs." On street tires, he managed a best of 10.75 seconds at138 mph. Since then, he's shown the car regularly and enjoys driving it whenever the mood strikes. "Even after more than 30 years, I still love this car," he explains. "The Pantera was the product of a unique marriage of the best European body design by Ghia, chassis and suspension by De Tomaso of Italy, coupled with a German ZF five-speed transaxle and the high horsepower and reliability of Ford's 351 Cleveland engine. Its engineering and design were well ahead of its time, and more than 40 years later, it easily blends with the look of today's best sports cars. All of the modifications we've done have made an already great car even better. It wows the crowds at regional and local shows and cruise-ins, and provides incredibly lively and fun driving excursions as well!" 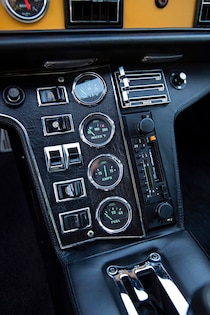 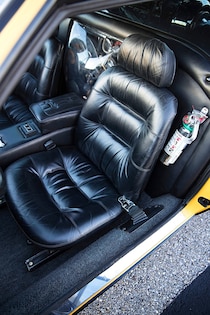 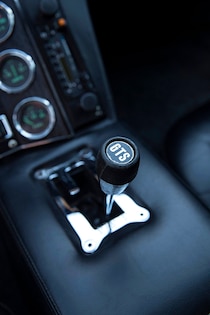 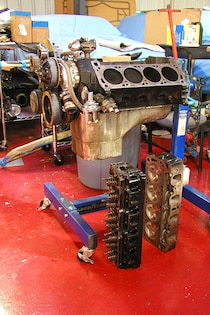 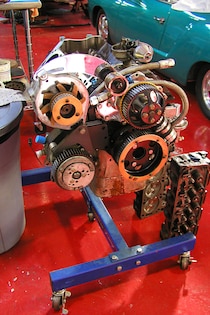