Few vintage Ford buffs will have much to do with a late- model intermediate called Ford Fairmont. Yeah, we remember those--Fairmonts were born in the anemic '70s when Detroit was learning how to build better cars to come later in the '80s. Of course you remember the Fairmont. At least one neighbor had one. It probably replaced their aging Falcon or Maverick. Knowing your dorky neighbor, they probably ordered it with the standard 2.3L overhead-cam four to reduce our dependence on foreign oil. Sure. But have you looked at the Fairmont's potential? The '78-81 Ford Fairmont two-door sedan and fastback Futura Sports Coupe make excellent low-buck restomods. You can get into them dirt cheap and funnel your money into nice refinements that can make Ford's lackluster Fairmont a boss ride. The Fairmont and corporate cousin Mercury Zephyr were the first Fox-bodied Fords. In case you're not familiar with the Fox-body platform, it became the '79-2001 Mustang, '79-86 Capri, '80-88 Thunderbird and Cougar, '84-89 Lincoln Mark VII, even the early '80s Lincoln Continental four-door sedan. Thanks to the versatility of the Fox platform, plenty of Mustang performance hardware can be bolted onto the humblest of Fairmonts. Are you beginning to get the picture?

We spotted this Fairmont Futura fastback at the 2000 Carlisle All-Ford Nationals. At first glance, we said, "what the?" Then we cruised in for a closer look. We shook hands with James Rooney, 25, who molded this stodgy grocery-getter into a work of art we'd be proud to drive anywhere. It's reliable, looks terrific, runs like stink with the throttle pinned, and isn't just another Mustang pocket-rocket. It's different, and that's why we like it.

James bought this car during the winter of 1991 when he was 16. Call it "James at 16." It was that overhead-cam four-cylinder ride your neighbor had. But James was determined to double the number of cylinders. When a friend of his totaled an '84 20th Anniversary Edition Mustang GT convertible, he gave the surviving components, including the 5.0L High Output V-8 with five-speed, a new home in his Fairmont coupe. He even opted for the Mustang's 7.5-inch Traction-Lok rearend--a bolt-in swap. If you study the Futura closely, you'll see the bloodlines and swapability of Mustang and Fairmont. The '84 20th Anniversary Mustangs had an '85 vintage instrument panel with aircraft-style gauges. It's a sharp cluster for the dated Fairmont.

By 1998, James was a lot more seasoned at car building. He took his diamond in the rough off the road and began building the Ford Phantom. James and his close buddy, Ray Cvetkovic, went to work, committed to building the best Fairmont Futura anyone had ever seen. 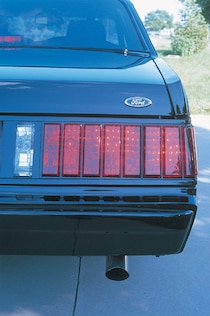 These gentlemen started with the engine, building a healthy 302 bored out to 306 ci. It has a steel crank, forged pistons, a main bearing girdle, Edelbrock Performer heads, a Weiand Stealth intake, a Comp Cams custom-ground camshaft, a 750-cfm Holley, and MAC equal-length headers, protected with a K&N air filter. A T5 five-speed funnels the ponies to an 8.8-inch late-model Mustang axle with 3.55:1 gears and an Auburn locker.

If you like the rich black finish, pass your compliments to James who prepped and painted the car himself. That's Glazurit 55, a German finish that gives the Futura a larger-than-life persona. The fascia is a mid-80s Ford LTD nose, a perfect fit for the Fairmont. Those pixeled mirror reflector taillamps were something James thought of himself. He and Ray turned imagination into reality.

On the ground, James and Ray didn't forget handling. They wanted a vehicle as stable as it was powerful. On the ground are '97 Mustang GT five-spoke wheels. Those are Mustang Cobra R binders on all fours. Koni adjustable shocks damp the action. BBK springs keep a ride level in all conditions. Goodyear Eagle ZR radials provide the stick and roll.

When you give James and Ray's Ford Phantom Futura a once-over just for fun, it makes you want to come back for more, thoroughly convinced there's something you might have missed. That's the nice thing about a slippery coupe like this one--it yields the unexpected.

The Ford Fairmont is one of those vehicles that people tend to forget as its life span wasn't that great. However, we got ahold of this 1979 Ford Fairmont beautifully restored by Late Model Restoration Supply, LRS, and its owner. - Muscle Mustangs & Fast Fords