When the musclecar wars were at their peak, you couldn't swing a dead cat without hitting a boulevard bully claiming to be the meanest and baddest thing going. More often than not, the boasts and bravados fell short once the rubber gripped the road. There were some cube kings, however, who carried big chips on their fenders that few could knock off. Count the Tasca Super Boss 429 among the elitist of the elite.

Mention Tasca Ford to most Ford-performance fans and, unless they’re too young to remember or sniffed too much paint thinner, they’re quick to recall the Providence, Rhode Island, dealership as the grassroots institution largely responsible for the mighty Cobra Jet Mustangs which came to market mid-stream in the 1968 model year. Bob Tasca, you see, was a firm believer in the "win on Sunday, sell on Monday" marketing philosophy--not only as it related to high-profile oval-track and road-racing venues, but also in the way sales could be impacted by the local drag- and street-racing scene. In other words, it didn’t always matter who won at Talladega in what car, as much as whether stock musclecar X down the street was able to whoop stock musclecar Y from uptown. And as the latter half of the 1960s turned the corner, Ford’s Mustang was proving to be the musclecar in small-town America.

When the 396 Camaro arrived in 1967, the Mustang found itself at something of a power disadvantage, a fact not lost on boy racers around the country nor on pulse-minded dealerships like Tasca Ford. With its ponycar sales now being threatened, Tasca looked to tilt the balance of power back to its corner. Through some creative tinkering, the Tasca group discovered that Ford’s 390 block, augmented with select off-the-shelf performance components (some of the 427 variety), could be a potent number indeed. Tasca took the idea to Ford’s brass, and the following year the 1968-1/2 Cobra Jet Mustang was introduced. Powerful, sleek, and a certifiable Camaro blaster, the Cobra Jet became Ford’s first serious entry into the rapidly escalating musclecar wars.

As Tasca began to reap its showroom rewards for the Cobra Jet, plans for Ford’s second attack were already underway. As a benefit of Bob Tasca’s close-working relationship with Ford’s higher-ups, Tasca Ford was privy to what would become Dearborn’s biggest shot of the musclecar era--the Boss 429 Mustang. Intended for release during the 1969 model year, the Boss 429 Mustang was actually meant to serve homologation duties for the spanking-new hemi-headed 429 engine destined for NASCAR competition. But, as before, Tasca realized the financial wisdom of creating the shortest distance possible between the track and the buying public. So the company managed to secure the seventh Boss 429 Mustang to roll out of the special Brighton, Michigan, assembly facility operated by Kar Kraft, Ford’s "super shop" that was tasked with producing limited-production specialty vehicles, including the Boss 429 Mustang. 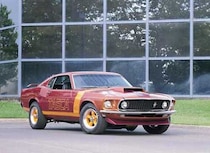 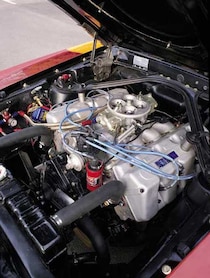 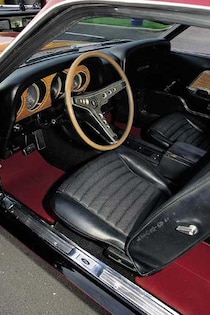 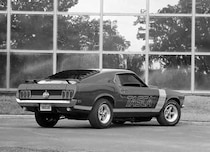 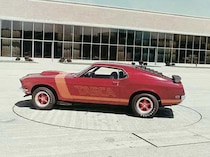 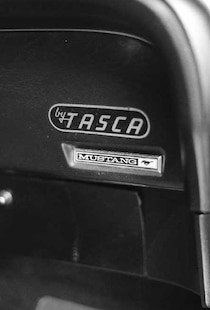 Boss 429 Mustang KK#1214 was the blueprint for a limited number of "Super Street" Boss 429s Tasca would build for retail sale. This little group of big-block brawlers was intended to rule the boulevard right off the Tasca lot. With a modified 494-cid Can-Am engine, an automatic transmission, and a visually striking multi-hued paint and graphics scheme, the "Super Boss," as it was dubbed, was the showpiece for the Super Street program. Riding in a Ford semi-trailer featuring Boss graphics similar to those on the Mustang, the Super Boss hit the road destined for drag-race venues across the country. The idea, as mentioned, was to proclaim the prowess of the Mustang and Ford line in terms the grassroots enthusiasts understood best: quarter-mile performance. Aside from being used as an enticement for consumers to buy "Super Street" 429s, Tasca foresaw the ancillary benefits of taking the Super Boss to the masses and drumming up Blue Oval loyalty through the car's on-track success. To raise awareness a notch or two further, Tasca made a standing offer of $1,000 to anyone who could beat the Super Boss. Running 11-second e.t.'s on street tires, and with mufflers intact, it's easy to see that Tasca had plenty of faith in the flashy little pony.

Tasca Ford campaigned the Super Boss throughout the Boss 429 production run, from 1969-70. After passing into the hands of a drag racer from North Carolina, the Mustang continued to strut itself on the strip until the early 1980s. In October 1996, Oklahoma vintage- race-car collector Brent Hajek located the legendary Super Boss through a friend. After discussing the car with the owner and verifying the heritage through the serial number, Brent wired the owner the money and had the car shipped sight-unseen. As the owner of such famed quarter-mile champs as Don Nicholson’s Comet, the Wickersham Ford A/FX Mustang, Connie Kalitta’s Bounty Hunter funny car, and Don Prudhomme’s Shelby Super Snake, it seemed only natural that the Super Boss would land in Brent’s hands.

As with his other drag champs, Brent intended to restore the car to its original Tasca-prepared form. That meant handing the car over to noted Oklahoma musclecar restorer Randy Roberts for the nine-month rebuild. Working with Rob Holzeman, Leon Blagg, and Jim Wicks, and with input from John Healey and Bob Tasca--both of whom were heavily involved in the original project development--Randy completed the job last summer, just in time to participate in the first Boss Nationals held in conjunction with the 25th Anniversary Mid-America Shelby and Performance Ford Meet in Tulsa. In addition to returning the Boss to show condition, another of Brent's missions was to set the Mustang on familiar grounds at dragstrips throughout the country. To meet current NHRA requirements, some upgrades to the suspension, fuel, and exhaust system were required. The car did not originally have subframe connectors, so Randy installed a set of Global Technologies traction bars. On the fuel-delivery side, an 1150 Dominator was added to the 494-cid V-8, along with new braided lines and a fuel cell. The electrical system was also updated by deleting the dual point ignition in favor of an MSD unit.

Once the final wrench was turned, the refreshed Super Boss headed for the dyno, where it posted a whopping 735 hp. The aggressive powerplant turned out to be so rascally that it became something of a liability. According to Randy, "We can't get enough rubber underneath it. It just won't hook up!" Running with its current set of Goodyear Polyglas tires, Brent has taken the Boss below its originally campaigned e.t. to an impressive 10.75. Randy hopes that regearing the car and fitting it with 28-inch slicks will provide a little better traction. Still, it's a monster. "I've raced 10-second cars before," Randy says, "and this one scared the life out of me. I wouldn't take it past quarter-throttle." So what are the plans for the reborn Tasca Super Boss? Brent says he'll "play with it on the street, go to a few Ford display deals, and start on the next project." Yes, arguably the baddest Boss Mustang to hit the track is back, and in better form than ever. If you're lucky, you just might catch a glimpse of this rolling piece of Ford performance-era history.