I've gotta tell you: This one caused a major adrenaline rush. There it was, all dressed out in Sikkens Twilight Turquoise. Lots of steel and body color where windows should be. Two doors. One tailgate. Zero defects. With power on tap. Meet Ford's decidedly rare '65 Falcon Sedan Delivery. If you were born before the '60s, you probably remember these. Frank's Nursery had one. That kid up the street used to roar up and down the block in one of these with those awful Thrush glasspacks in the '70s. Remember those days?

Sedan Deliverys like this one were quite utilitarian in scope. They did all kinds of light-duty work for virtually every type of business that needed hauling capability. Some companies had fleets of them. And they were powered by everything from a 170ci six to the 289-4V V-8. None were ever fitted with the 289 High Performance V-8, which has significance to this story.

You can imagine our response when Gary McKay fired the 289 on this one. It gently roared to life with a throaty report and the clatter of mechanical lifters--a sweet sound Ford buffs love to hear. Hearing it left a lot to the imagination, leaving us confident about what we heard. We were convinced this man built what Ford couldn't or wouldn't some 35 years ago: a Falcon with 289 High Performance power.

Gary tells us Ford produced just 650 Falcon Sedan Deliverys in 1965. Most were fitted with six-cylinder engines. Few survive today. His goal was to find and build a Sedan Delivery to promote his business.

Finding the Sedan Delivery was something of a religious experience for Gary because these diamonds in the rough don't surface every day. He hit pay dirt with this one, a "C" code 289-2V Sedan Delivery that was originally delivered to the Washington State Department of Fisheries. Ironically, it was never assigned to the department's fleet, but instead a supervisor drove the car until it was sold by the department at auction in 1981. In all those years, it was never in an accident nor did it succumb to rust. The title changed hands twice before Gary found the car in 1990.

Gary never intended to build the Falcon to this degree. He wanted nice-looking transportation that would draw attention to his electrical business. Projects like this tend to take on a life of their own, though. They grow. They breathe. And they become more than we ever expected. A full-scale restoration began that included building a 289 High Performance V-8 and marrying it to a C4 and a 3.25:1 9-inch axle. The only thing Hi-Po about this engine is the block and main caps. On top are ported and polished 351W heads with stainless valves, way better than your garden-variety Hi-Po head. In the valley, an aggressive roller-tappet camshaft, sending a linear signal to roller rockers on top. A Cobra high-rise intake and 650-cfm Holley channel the mixture to eight hungry bores.

On the ground are 15x6-inch American Torq-Thrust wheels riding on Goodyear Eagle GT radials. A wide footprint like this improves handling. Gas shocks and sway bars front and rear complement the Goodyears and Americans.

Mark Stoltenberg massaged the body and applied the Sikkens urethane basecoat/clearcoat finish. Lens Upholstery did a magnificent job on the custom cloth interior with gray accents. All in all, not bad for a ride that was intended to bring home the bacon to begin with. 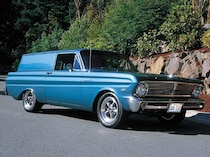