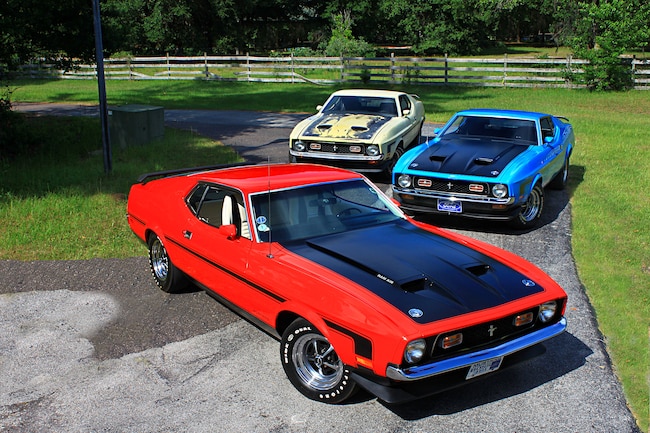 Boss 302s are Trans-Am champions. Boss 429s are the most exotic, and giants in the marketplace. So where does that leave the Boss 351?

It was the last Boss Mustang in the magnificent Boss Mustang trilogy, probably the fastest in stock configuration, and it was the only Boss built on the new 1971 body style. The other two Boss Mustangs seem to capture more of the headlines, leaving the Boss 351 the least known among muscle car rank and file.

If you're a little fuzzy on what the Boss 351 was all about, it was about street and strip performance. The Trans-Am road racing effort was over, and the Boss 429 supercar thing had played out, too. Both were canceled, and a new Boss Mustang took center stage for 1971. It had more cubes than the Boss 302, less complexity than the Boss 429, and in some important ways it hit the sweet spot of Mustang's true performance potential. It was easy to live with in daily traffic, but if you wanted to kick it, the Boss 351 had a strong midrange punch that could put you through the quarter-mile in mid to high 13s, or less if you really worked it.

The Boss 351 showed up in November 1970, two months after the model year began. As the sales year closed, the Boss 351 turned out to be the final chapter in the tale of Ford's extraordinary Boss Mustangs. Sales amounted to less than 2,000, thanks to a changing marketplace and a list price of $4,101, highest of any 1971 Mustang.

Though the Boss 351s are rare today, we had the pleasure of gathering a tasty trio of them packing a collective 990 horsepower. Not bad for engines of modest displacement. One car is a detailed show winner; one is in as-found, unrestored condition; and one has one of the earliest production VINs known to exist. If you like your Mustangs powerful and rare, these cars are for you.

Steve Collins was cruising Hemmings back in May 1996 when he came across an ad for a Boss 351 Mustang. It was two states away, but Steve drove up for a closer look. It was a black basket case sitting in a body shop, well optioned, but without a drivetrain, in a state of disassembly that would give even the greatest optimist pause. But Steve liked it. He also liked a very rough red one sitting nearby, so he bought both.

The red car had been sitting out in the weather for almost two decades and had become a showcase of severe rust. If there was any good news to this story, it was that the odometer showed only 58,200 miles and the car still had the Ford factory exhaust manifolds, H-pipe, mufflers, and tailpipes. The rev limiter was still working too.

"The car was all original and complete," Steve says. "It was missing only the correct carb and distributor, which usually is the case with these cars."

He knew he had a big job on his hands. The following January he began. Item one was the extensive rust repair. He worked one section at a time, drilling spot welds and removing the rusty panels, then cleaning the area and welding in fresh metal from National Parts Depot.

Steve's a locksmith by trade, not a bodyman, but he persevered, one panel at a time. It was a painstaking process, but he kept moving forward. Slowly, a solid Mustang platform began to appear where a rust bucket used to be.

As the body was taking shape, the engine was sent to a machine shop for a rebuild.

"The motor was bored 0.030 over, the block was decked, heads shaved, new aluminum pistons installed, a slightly beefier Crane cam was added, and rockers were upgraded to Crane roller rocker arms."

When the rust repair was complete, it was time for new paint.

"Your bodywork really shows up after it's painted," Steve says. "A good paint job consists of getting rid of the waves and small dents in the body."

Using PPG materials, Steve prepped, primed, and sealed the body, then put down two coats of red urethane basecoat (Ford paint code 3: Bright Red) and four coats of clear. He then spent "many hours" wet sanding, machine buffing, and then polishing the paint "to get that mirrored look."

Last step was to apply the low-gloss blackout to the hood, taillight panel, and rocker areas. New stripes finished the extensive body restoration.

As the car came back together, Steve added a few popular options, including the rear deck spoiler, Magnum 500 wheels, full console, rear window defroster, eight-track player, and deluxe two-spoke steering wheel because the standard two-spoke wheel was rather plain.

It was a long road back from the brink of total rustaway, but Steve pulled it off. He is now a regular at Mustang shows, where the Boss is a big hit and working its way up the show car seniority list. In fact, he is scheduled to get his first Mustang Club of America grille medallion this fall, recognizing the car's cumulative points scores at MCA shows.

Steve Collins spent years painstakingly turning this Boss 351 from a rust bucket into a show winner.

Special effects allow a peek through the Boss's air cleaner to the Autolite 4300-D spread-bore carburetor. The H.O. motor was upgraded with an overbore, new pistons, a hotter cam, and a beefier valvetrain.

Steve added some amenities to the Mustang's interior during the restoration, including the center console and deluxe steering wheel.

In 1998, he became curious about the Boss 351 after reading an article in this magazine comparing the three Boss Mustangs. He was impressed with how the Boss 351 performed compared to the mighty big-blocks, even with fewer cubes.

That interest simmered for a few years until 2004. While on military assignment in Charleston, West Virginia, Dennis ran across a Boss 351 for sale on eBay in nearby Grayson, Kentucky. Dennis made the drive to have a look. What he found was a running car in pretty good shape. A local guy had bought it from a seller who had kept it stored away for years.

"It had been repainted Grabber Orange, but it had its original engine and drivetrain, original interior, and all the Ram Air ducting was there."

The deal was looking good. Other than some localized rust in the inner fenders, the car was solid and it drove well. The odometer showed 45,000 miles, and it was certainly correct. It was too good a deal to pass up. Dennis bought the Boss and brought it back to his home near Jacksonville, Florida.

In 2006, he began to freshen up the Boss 351. Some minimal rust repair on the wheelwells and firewall were all that was needed; the floorboards and fenders remain original factory issue. Dennis had a friend who owns Johnny's Custom Creations in Jacksonville return the car to its original Grabber Blue, one of Ford's all-time favorite colors. The interior was in good shape. The door panels and upholstery were still good, and only the carpet was replaced.

Though it had relatively few miles on it, Dennis had the engine rebuilt. He stuck to the stock 11.0:1 compression ratio but slightly upgraded the cam and did some supertuning of the Autolite 4300-D spread-bore carb. The balance of the drivetrain remains factory original.

Besides the optional power steering and AM radio it was invoiced with, it was upgraded with an AM/FM eight-track, a deluxe two-spoke steering wheel, and Magnum 500 wheels.

There is discussion in Boss 351 circles that early Grabber Blue cars may have had black stripes and trim rather than the customary argent. Dennis maintains that in the absence of conclusive documentation, he opted for black, which you've gotta admit looks good.

Another interesting bit about Dennis's car is the very early build date. Boss 351s were first available in November 1970, and Dennis' Boss 351 was built in the first month of production. Not only that, but it has the fourth earliest known VIN number.

Great as the car is, Dennis says, "The best part of owning the Boss 351 are the friends I've met at car shows."


Dennis Petty's Boss had been painted Grabber Orange before he bought it in 2004. He decided to return it to its original Grabber Blue during restoration.

Dennis' car showed just 45,000 miles, but he opted to rebuild the H.O. motor with a little hotter cam.

As Steve did, Dennis upgraded his Mustang's interior with a deluxe wheel and an AM/FM/eight-track player.

Here we have what is becoming ever scarcer with every completed restoration: the intact, unrestored muscle car. Steve Collins owns this running, driving example, too.

Steve was already heavy into the Boss 351s when this one popped up for sale on the Boss 351 registry website in October 2010. It was being sold by its original owner. He liked the Grabber Yellow color, and at $16,000, the price was right too. It was a running car, but Steve trailered it home out of caution. The odometer showed 52,139, but given the car's overall condition, Steve suspects that the odometer is on its second trip around.

Upon examination, the yellow Boss was also produced very early—November 19, 1970—which puts it in the first month of production. Now here's something that may surprise you. The yellow Boss was produced November 19, but its VIN ends in "141198." The blue Boss was produced on November 27, eight days later, but its VIN is 6,094 units earlier. How does that happen? Because the cars are not built in order of their VINs. Still, that seems like a big jump.

Steve says that the eight options are more than normal, but it is not a superhigh-optioned car.

As Steve finishes up a third Boss 351, a loaded black car, the yellow car awaits its turn. Parts availability is good (except for engine parts), and now he has more restoration experience than ever. Once finished, the three will give him a concours show car in the black Boss, a show/driver in the red one, and a nice driver in the yellow Boss.

For now, it stands out as a time warp back to when we used to see cars like this beside garages, on the back line at sketchy used car dealers, and sometimes in parking lots.

Steve's yellow Boss is an original, unrestored car—and shows it. He plans to turn it into a nice driver.

The yellow Boss is tired but is still a runner. The 52,000 miles on the odometer are likely the second go-around.

Of the three, the yellow car came from the factory with the most options, including the Rim-Blow steering wheel and power steering, center console, and dcor group.

We sifted through data from the Pure Stock Drags to compile this list of the 10 fastest Mustangs. Here is what the race results showed.

Also just hitting market is a new book from Boss 351 enthusiast Rick Ybarra, Jr. The 222 pages are chockfull of Boss 351 info that Ybarra spent most of his adult life acquiring. The book is self-published, so don't expect high-end production value, but for the enthusiast and restorer we know of no source with so much insider info in one place. First editions of Boss 351, A Comprehensive Owners Guide and Story are available for $65 check or money order (plus $5 shipping to U.S., $15 to Canada, $22 international, U.S. funds) from Rick Ybarra, 2618 Iowa St., Davenport, IA 52803-1809. Only 1,500 were printed, and Ybarra tells us that demand is strong, so don't wait too long. 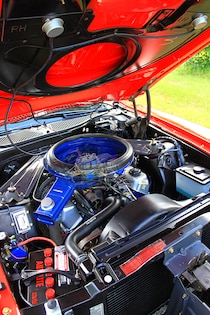 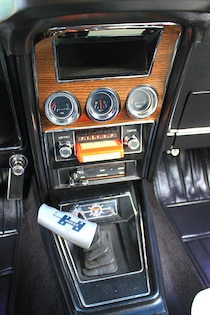 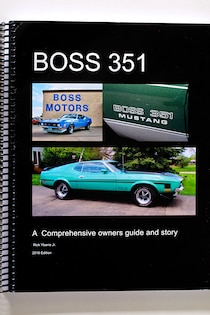 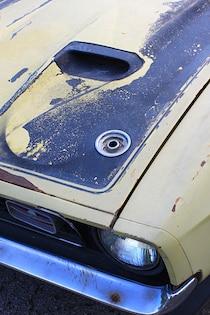 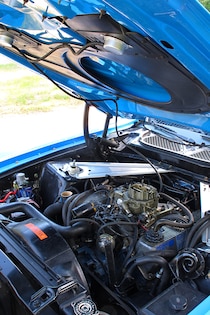