Together They Spell Performance

Would you believe these Fords were photographed nearly 10 years ago in suburban Chicago? Do you remember the period: 1988? Life couldn't have been sweeter for a guy like Ed Putz, who owned both of these cars at the time. In those days, musclecar resale values were the highest they had ever been, with Cobra Jet Fords raking in the proceeds in great numbers. They sold well and held their value.

Since that time, musclecar values have come down to more realistic levels and within reach of most of us looking to strap brute torque to our backsides. Ed Putz was never in this for the money. He loved powerful Ford intermediates, which explains why these two warriors were parked in his garage in those days. We haven't seen Ed in a long time, but if we were professional gamblers, we'd wager these rocketsleds are still in his garage. Check out the '69 Fairlane Cobra fastback dressed in Candyapple Red. We celebrate this car in 1998 because it has been thrilling audiences for 30 years. Under the bonnet is a ram air 428 Cobra Jet big-block that promises us boatloads of torque. It will smoke those Goodyear Polyglas GTs right off the styled-steel rims thanks in part to a 3.91:1 Traction Loc and Top Loader four-speed. This means we have the coveted Drag Pak option that includes an oil cooler and a 428 Super Cobra Jet engine, which translates to low 14s in the quarter-mile at more than 100 mph.

A lot of folks mistakenly call this ride a Torino Cobra, an honest mistake because it shares the same body with the Torino. But nowhere on this body will you see Torino, because it is the Fairlane--all business coupled with brute strength.

More striking, certainly, is the '69 Torino GT, an attractive 428 Cobra Jet intermediate with white GT stripes, styled-steel wheels with GT caps, and all the exceptional appointments we expect from a loaded Torino. That's Ford's Candyapple Red beneath the white and chrome appointments.

Doesn't the interior remind you of your senior prom? The console came between you and your datethe smell of new vinylthe anticipation of passionate necking. Remember what got those adrenal grands humming? Yeah, so do we thrusting the C6 shifter into Drivemashing the gas to the shocking torque of the baddest big-block in 1969 showing off for your date alongside a humbled Camaro.

Our message? The Torino GT is about luxury as well as performance. Performance comes from Ford's 428 Cobra Jet engine. Convenience comes from the C6 slush box and 3.25:1 gears. The 3.25s offer a nice combination of acceleration and cruising potential. The bottom line here is fun in two collectible Ford intermediates. Who can dispute it? Certainly not Ed. 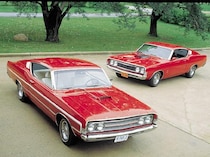 1969 Ford Fairlane Cobra - The Other Cobra