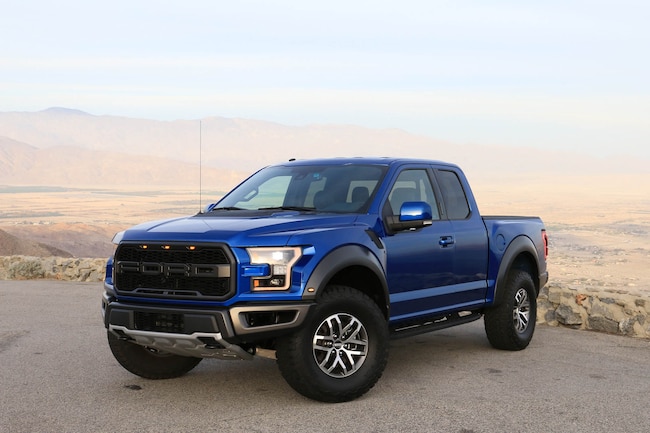 When Ford introduced the F-150 Raptor in 2010, it was a fairly revolutionary proposition. While a high riding pick up with prodigious output was nothing new, the Raptor's mission as a truck that could handle Baja-style, high-speed off-roading while remaining friendly enough to be used as a daily driver was something no other automaker had attempted.

Coupled with its bulging fenders, oversized tires and overall purposeful look, it was no surprise that it immediately caught the attention of the enthusiast contingent. Despite having essentially no direct competition from another OEM, Ford continued to improve upon the Raptor's design, adding more function and capability along the way.

After taking a three-year hiatus, the Raptor returns to the fold with an extensive list of revisions, which seek to improve its capability while keeping it both accessible and charismatic. The result is a truck that's stronger, lighter, faster, and as close to tailor-made for the post-apocalyptic society as possiblestraight from the factory.

Modernized Inside and Out

Ford has gone to great lengths to push the F-150's design to the forefront of the industry from both a mechanical and technological standpoint, and those efforts pay off handsomely with the latest iteration of the Raptor. It's up to 500 pounds lighter than its predecessor in certain configurations, due in no small part to its new all-aluminum bodywork.

Pop the hood and you'll find some big changes there too. Gone is the 6.2-liter V8 from the previous generation; replaced by a high-performance version of Ford's 3.5-liter, twin turbocharged EcoBoost V6. While we'd be lying if we said we didn't miss the roar of that big V8, the sheer capability offered from this new power plant makes a pretty compelling case for itself, dishing out 450 horsepower and 510 lb-ft of torque the latter of which comes in at just 3500 rpm. That's up 39 ponies and 76 lb-ft from the V8. The extra power doesn't come with any penalties at the pump either yielding significant improvements in fuel economy.

The gearbox this new engine is hooked to has a big number to boast about too: 10. That's the number of gears that the new Raptor has at its disposal with this new paddle-shifted transmission, and it's a unit you'll be seeing a lot of in coming years. Born out of a joint venture between Ford and General Motors, this 10-speed will see use in everything from Ford's high output pickups to upcoming Corvettes and the new Camaro ZL1.

And then there's the suspension. Offering 13-inches of travel up front and 13.9-inches at the rear, the system is highlighted by a set of lovely nine-stage Fox shocks. Unlike adaptive units, which typically change compression and rebound characteristics as a whole based on the mode they're set to, these units are position sensitive. That means the compression and rebound characteristics of the shock change depending on the position of the suspension, adding significantly more damping as the shock gets closer to full extension and full compression. The upshot of this trick technology is that it allows the suspension to remain comfortable on the road while also providing serious capability when the pavement ends.

The Raptor's drive modes get a big overhaul as well. Gone is the clunky off-road system from the previous generation, replaced by six unique modes three designed for the street and three for off-road. Baja Mode is perhaps the most interesting among the group as it not only adjusts the traction and stability control systems along with the transmission's shift schedules, but also incorporates an anti-lag feature that keeps the V6's turbochargers spooled up regardless of engine revs, resulting in instantaneous throttle response anywhere in the rev range particularly crucial when negotiating inhospitable terrain at speed, as we discovered.

The first leg of our multiple stints behind the wheel took us on a SoCal road trip from San Diego to Borrego Springs, a small desert town just a few miles away from the Salton Sea. This gave us a chance to see how the new Raptor would behave out on the road, which is realistically where most new Raptors will spend the vast majority of their time.

After settling into the Raptor's deeply bolstered sport seats, what's striking is how easy the Raptor is to navigate around town despite its off-road tuning. Out on the highway, tire roar from the new 35-inch BF Goodrich All-Terrain T/A K02 tires (which were developed specifically for the Raptor) is surprisingly low, and with Sport mode engaged, traversing the twisty mountain roads along the way showed minimal body roll and a gearbox that was up to the task. Using the magnesium steering wheel-mounted shift paddles allowed for more control, but the gearbox was well behaved enough to leave it to its own devices the majority of the time.

Out here the V6 showed its worth, dishing out gobs of low-end torque with admirably linear power delivery past about 2,500 rpm. The V6 is not as much of a crowd pleaser as the old V8 from an audible perspective, but the performance improvement that the turbocharged engine provides is undeniable.

That became even more evident when we headed out into Anza-Borrego Desert State Park to put the new Raptor through its paces on an extensive rock crawl trail as well as some high speed maneuvering through varying off-road terrain. Ford used this area for much of their durability testing during the new Raptor's development, and it's some of the most demanding terrain your author has ever put a truck through, production or otherwise.

It's here where the new Raptor's performance can truly shine, and the scope of capability at one's disposal is flat-out incredible for a factory-built truck. Even the most treacherous parts of the rock crawl and hill climb were no match for this pickup, and sections requiring full articulation of the rear end on one side and full compression on the other were dispatched as though we were cruising through a parking lot.

An optional camera system allowed us to keep tabs on the truck's positioning through areas where the approach angle made it difficult to see the terrain directly in front of us, and the Raptor's hill descent control kept things eminently stable while traversing the loose terrain we headed back down the trail in this 5500-pound bruiser.

While the truck's behavior was impressive during the street and rock crawl sections, it was our stint on the high-speed off-road course that showed us what the Raptor is really all about. Once on course, the Ford engineer riding shotgun instructed us to fire up Baja Mode and stab the throttle. Gleefully, we obliged.

Blasting along at roughly 90 miles per hour through the desert, the Raptor finally feels truly at home. While the traction and stability control systems in Baja Mode will still reign you in if things start to get too out of hand, they're tuned to allow for a healthy amount of rotation and wheelspin before they start to intervene, allowing for plenty of entertaining theatrics out on the course, where high winds the previous night had created a few surprises for us along the way.

The Raptor felt ready for just about everything we could throw at it, and the limiting factor in the equation soon became the sheer fortitude required to stay on the throttle through the bigger "events," which is engineer-speak for situations that create a lot of suspension travel. Yet we soon discovered that speed and weight transfer are the fundamental elements of stable high-speed off-roading. Getting either one wrong can result in a bad time for both the truck and its occupants. Expert tutelage goes a long way here, as does a suspension system and drivetrain tuned specifically for this kind of work.

"I haven't done this yet. Let's see if we get stuck!" proclaims our instructor as we round the side of a large sand bowl section, which we take at a steeper angle than previous trucks have earlier in the day, kicking the back end out as we dip deeper into the throttle while the Mud and Sand driving mode figures out the rest. We didn't get stuck. Like the other sections of the course, the Raptor simply shrugs it off like a truck born to do this sort of thing should. It makes you start to wonder what the real limits of the new Raptor truly are, because despite the demanding terrain found in Anza-Borrego, it seems clear that the truck has a lot more to give; provided you know how to utilize it.

While that's remarkable out of context, it's even more impressive considering the fact that this is a warrantied, factory-produced pickup designed to be used like a typical daily-driven F-150 and it carries an MSRP starting under $50,000 to boot. If you've got the coin and a hankering for four-wheel-drive thrills, there simply isn't a better alternative on the market today. 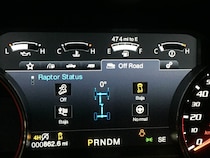 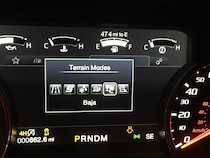