Mirror, Mirror, On The Wall...Who's Got The Fairest Fairlane Of All?

OK, so it's a tough question. But as we remember it, the ugly princess wanted to know which prince at the party had the fairest Fairlane. Earlier, she had pricked her finger and fallen into a deep, deep sleep. That was when she had the famous nightmare in which she dreamed the wicked witch was driving a 348ci W-series Impala instead of a broom.

Anyway, according to the story, in all the kingdom, there were only about 100 Thunderbolts, so the princess couldn't be too picky. Of course the big question is, when she's not kissing frogs, what does a princess look for in an early-series Fairlane? Most of the princesses we know want air conditioning and the FE 427. But, as she found out, all of the T-bolt Fairlanes were already owned by various knights and knaves throughout the land, and air conditioning wasn't available in a Thunderbolt. No doubt about it, this makes Bob Markworth's '63 a contender.

What could possibly be a better conveyance in the search for the glass slipper than this sweet '63? For one thing, the Rangoon Red hue makes for a most attractive package. The black vinyl top contrasts nicely and sets this car apart from the rest. We know when owner Bob Markworth isn't out slaying dragons, he's working on the red ride to keep every detail perfect. (His other car is a pumpkin coach.) We know for certain that Bob enjoys showing the car at local shows, and he keeps 'er cherry by driving fewer than 500 miles a year.

The car is close to stock with an aluminum intake, a 600 Holley four-barrel, and a set of headers helping out under the hood. This car is an original 289 Hi-Po "K" model offered by Ford for its Total Performance campaign. This publicity move by Ford in the early days of 1963 served to promote the sparkling performance of its automobiles. Equipped with the 271hp version of the 289, only about 300 copies were originally offered. So Bob's car is not only rare but also historically significant. This car was part of the opening volley of what would become the factory horsepower wars. The 271-horse mill is backed up by a T10 four-speed and 3.25:1 rear cogs. The original ratio was a deep 3.89:1. These Hi-Po Fairlanes featured heavy-duty driveline components, bigger brakes, a three-row radiator, and special 21/2-inch exhaust.

A quick look inside the car shows a pristine interior, which is in keeping with the super-clean condition of the rest of the car. Bob tells us that this car is identical to one he owned back in the '60s, and he feels good that he's able to hang on to a little piece of history.

In the end, everyone lives happily ever after, and even if we can't keep our fairy tales straight, we think this sweet '63 Fairlane is a dream come true. 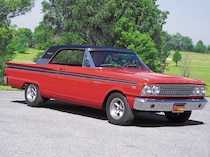