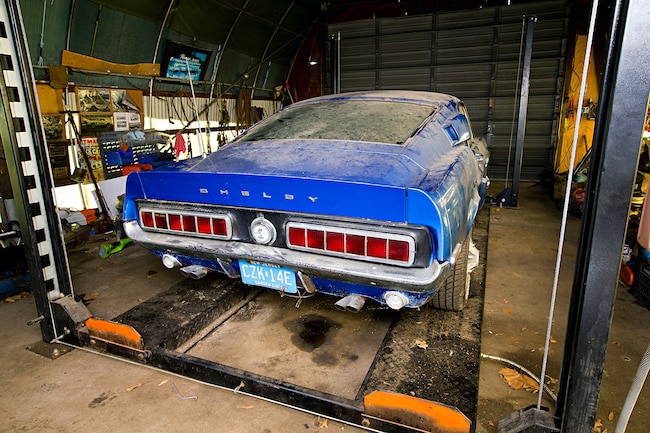 You guys must be getting tired of reading about barn finds that really weren't found in a barn on a farm. Well we have a legit barn find, found on a peach farm in southern New Jersey. This 1968 Shelby GT500KR has been hiding for the last 42 years tucked away down on the farm and has recently broken cover. Sadly, that has come about with the passing of its owner, Art Winner. Purchased in 1976, he was only the second owner of this exceptionally well-preserved Shelby.

Originally delivered to Pletcher Ford, which was just outside of Philadelphia, the Shelby spent the first few years in Pennsylvania until it was purchased by him and registered in New Jersey. Art was very secretive about this particular car and didn't drive it much, so it sat. Over the years, he logged very few miles on the odometer, totalling just a scant 21,990 miles. The time he spent behind the wheel was usually limited to quick trips on the local roads in his area. Once he was done, it was tucked back in storage.

While the car is covered in dirt, a close inspection reveals an incredibly solid hit-free body still wearing all its original sheet metal and paint. The 428 Cobra Jet engine is numbers matching, as is the rear. While those are original, the gearbox was changed at some point, as were some pieces under the hood, but overall it is in excellent condition. The interior is equally original, and while quite dirty, also exceptionally well preserved.

This car, along with another Mustang, and some property were part of his estate that is in the process of being liquidated. The proceeds from the sale of these items, as per Art's wishes, are to be given to a number of charities. We can report that as you read this, the Shelby is now headed to a new home in the Midwest, where we've been assured that what you see is going to be preserved. There are no plans for a restoration. Look for a more in-depth feature with more photos soon!

This Shelby has been moved around over the years between buildings on the farm. It was once parked in a small shed for many years and also spent a short amount of time outside. Its last resting spot is the building with the lift. Due to its limited exposure to the elements, the body is incredibly solid and still wears its original Acapulco Blue paint.
Tucked in the engine bay is the original numbers-matching 428 Cobra Jet mill. It is all incredibly dirty, but also in excellent condition. As with any car, over the years some parts were replaced, like the fuel pump and distributor, and the smog system (which was usually deemed as a horsepower thief) was removed. Also missing is the fan shroud and some of the pieces from the snorkel air cleaner.
The interior on this Shelby is perhaps the best indicator of how well it has been preserved. Under all the dirt that has accumulated, the original seats are still in place and show no signs of wear. The only issue is with the headliner, which started to sag and developed a tear.
At some point, the original Shelby shifter gave way to the Hurst shifter that is currently installed. This is the only part in the interior that has been changed, along with the AM radio. While we can’t be certain, we suspect that this shifter was added when the original gearbox was swapped. The current one has a build date from 1970 and is what would have come on a Boss 429.
The hubcaps on the car are in remarkably good condition and reflect the very limited use the car saw over the years. The tires currently mounted on the rims were added a few years ago because the original tires were past the point that they could safely hold air. We were told they were still the original tires that came on the car when Art Winner purchased it in 1976.

First Drive! Behind the wheel of Ford Performance’s most balanced non-R Mustang yet — the 2019 Shelby GT350

We get behind the wheel of the freshened 2019 Shelby GT350, which benefits from a host of aero, calibration, chassis, and suspension upgrades.

Readers share the story and photos of their muscle mustangs or other fast fords including Steve Seely and his 2013 Shelby GT500.

Reader shares the story and photos of his muscle mustang or other fast ford. We take a look at Edward Guise's 2014 Shelby GT500.