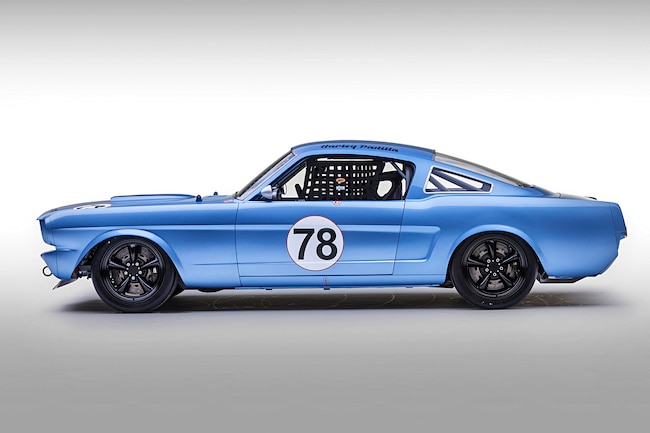 Not many people are lucky enough to still own their first car, but Harley Padilla is one of them. He got this Mustang from his dad when he was 14 years old, and he used the car to learn what to do and what not to do when working on cars. “When I was 16, I cut the dash out of the car to make it lighter,” Harley says, “and my dad went through the roof. But he didn’t know that I kept the dash and had Bodie reinstall it for this last build.”

That obsession with weight savings played a big hand in the car’s current and final stage—a no-compromise, full-tilt road race machine with almost 800 hp, a 2,800-pound curb weight, and the goal of pinning a smile on Harley’s face as he thunders down the front straight of Willow Springs at ludicrous speeds, leaving Porsches and Corvettes in his dust. Harley says, “The car has been restored four times over the years, each time a new evolution with a different engine, different bodywork, different paint, etc., but it’s in its last stage now. Now I finally got it the way I want it.”

Harley’s father planted the racing seed in his boy early on, taking him to a vintage race at El Toro Marine Base in Southern California when he was young. “Around the time he gave me the car, he ‘accidentally’ took me to a road race, and ever since then he’s dreaded it,” Harley says with a laugh.

Since the stock Mustang Unibody is too flexible for ultimate handling without a ton of work, Harley went to Bodie Stroud at BS Industries (BSI) in Sun Valley, California, for one of his company’s complete 1965-1968 Mustang chassis kits. The BSI chassis is welded to the stock Mustang floorpans and framerails, turning it into a full-frame car with much less flex than stock. Add in a 14-point rollcage, and this thing is as stiff as a Trans-Am car. Bodie tells us, “Harley came to us with a Fairlane project, which has been here for two or three years because he got anxious and put this Mustang in front of the Fairlane. We had built him a black ’65 fastback before, a period-correct Mustang that he used for vintage road racing, but then he crashed his blue Mustang. Having seen our chassis for Mustangs, he wanted it for the blue car and told us to put it in front of the Fairlane.”

True to his nature, Harley wanted his car to be as light as possible, and he spared no expense to get what he wanted. Bodie says, “We wanted to make it as light as it can be, so the chassis and ’cage are chromoly, there are a lot of titanium fasteners, everything is as light as it can be. We really went to town on it, putting in new floors, quarters, fenders, and built the complete chassis. It came out unbelievable.”

One main design objective was to stuff as much rubber as possible under the stock sheetmetal, and after a lot of engineering and thought, BSI got P305/45R18s to fit. “We brought the track width in, really tucked it in but maintained the correct roll centers and scrub ratios. There’s a very small fender flare there but not much more than factory,” Bodie says. BSI also did all the bodywork and paint, spraying it in “the lighter of the three Ford GT blues,” says Harley. All of the sheetmetal on the car is N.O.S., not reproduction; the only exceptions are the Shelby Cobra R front fascia and hood, which no doubt will annoy the Mustang restoration crowd.

The drivetrain is equally serious. The all-aluminum 363ci engine was built by Jim Grubbs at JGM with a Dart block, AFR 205cc cylinder heads, a Sonny Bryant billet crank, Oliver rods, a Comp Cams solid roller cam riding on roller cam bearings, an Edelbrock Victor Jr. intake, and a BLP road racing carburetor that Harley says, “is by far the best carburetor I’ve ever used. I put BLP carbs on all my road race cars.” With 14.5:1 compression and running C12 race fuel, the small-block makes 778 hp, enough to make it scary fast on a road course. The transmission is a Jerico four-speed with a Tilton 7.5-inch triple-disc clutch, which feeds through a Mark Williams carbon-fiber driveshaft to a Speedway Engineering 9-inch with a Strange aluminum third member.

Harley has already put a bunch of laps on the Mustang, running it at Willow Springs, Buttonwillow Raceway, and Sonoma (Sears Point), and the car is in the “sorting” stages now as they dial in the suspension to Harley’s tastes. He generally runs open track and club events, as competing in the Vintage Auto Racing Association (VARA) series would be difficult. Harley explains, “I race it just for fun. I might do some VARA races, but they’ll bump me up from Vintage to the Modified class, and I don’t know if I can keep up.” Technical inspectors at the race track are often confused by the car. Harley says, “Every time an inspector goes over the car, they ask, ‘What class did you build this car for?’ and I answer, ‘None of them; I built it the way I want it.’”

He still has the black Mustang, saying, “I let Dad drive it on the track when we’re racing. It’s a street/race car that’s vintage correct.” He’s also building his father a Shelby clone, and he just bought Roush chassis number 005, the old Motorcraft-sponsored 1984 Mustang SCCA race car. He also owns Roush chassis number 002, the ex-Willy T. Ribbs/Greg Pickett Capri racer. “I’m a Roush nut,” Harley says. He is also having Matt Walrath, who did a lot of work on this Mustang, build him a Trans-Am car as we write this. Those Roush racers should fit in just right with Harley’s Mustangs and his upcoming Trans-Am car, creating a garage scene we can all envy. Especially those of us with road racing blood in our veins.

This car was built for one purpose only: maximum fun on a road course. The Lexan windows, save for the quarter-windows, are from Shields (racingshields.com) and have the company’s Supercoating that makes them crystal clear at all times.
The car is based around BSI’s 1965-1968 Mustang chassis, which uses rectangular tubing to turn the Unibody Mustang into a full-frame car. It retains the stock floorpan but is welded to it. The chassis comes with framerails, a front crossmember, upper and lower control arms with BSI’s patented EZ-Aline adjusters, Matt Walrath–fab’d spindles, RideTech coilovers, a rack-and-pinion steering setup, spindles, a rear crossmember with four-link brackets, a triangulated four-link, rear frame plates, a rear shock crossmember and sway bar mount, a 9-inch housing (though Harley’s car has a Speedway 9-inch), front and rear sway bars, forward rollcage down bars, and inner fenders.
Here you can see the front portion of the BSI frame, Matt Walrath–fabricated front splitter, and Jones Racing Components engine pulleys.
BSI’s four-link setup and JRi adjustable coilovers control the rear suspension. The exhaust was fabricated by Harley and his friend Matt Walrath using Burns Stainless bullet mufflers and merge collectors on tri-Y headers. All of the electrical cables are hidden in the rocker panels. Harley says, “When I build a race car, I don’t want to see all of that stuff, so I had Bodie remove the rockers, bury the cables in there, and then reattach the rockers.”
Jim Grubbs built the 363ci small-block using only the best parts available. That includes a Dart aluminum block, AFR 205cc heads, a Bryant crank, Oliver rods, a Comp Cams solid roller camshaft, a BLP road race carb on an Edelbrock Victor Jr. intake, MSD ignition, and Jones Racing Components pulleys. With 14.5:1 compression and on race gas it makes 778 hp.
More hardcore road race stuff: The oil system is controlled by a 5 Stage Peterson dry sump.

The trunk holds the Peterson dry sump oil tank and custom Protech fuel cell with an internal Edelbrock fuel pump. Harley designed the return-style fuel system with the help of Rod Stern.
The wheels are 18s from Vintage Wheel Works (originally from PS Engineering) and the tires are P305/45R18 Hoosier race slicks. The wheels were machined to fit huge AP Racing 6-piston calipers (4-piston in back) and 14-inch rotors—the calipers clear the wheels by 1/16 inch.
Harley took both his Mustangs to Sonoma Raceway for testing.
Testing at Willow Springs International Raceway. 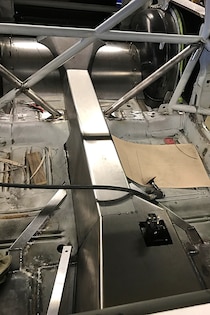