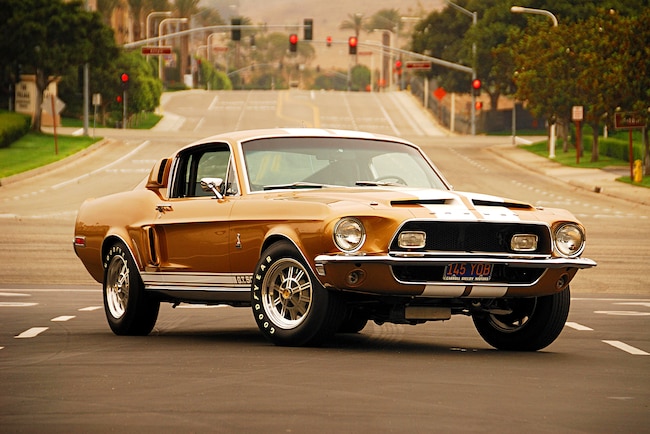 The story of the Shelby G.T. 500 has been told many times in many publications, so just a short recap is in order. Introduced for the 1967 model year, the G.T. 500 was the big-block version of Shelby’s groundbreaking G.T. 350. It was the car that prompted Carroll Shelby to say, “This is the first car I’m really proud of.” This was due, in part, to the fact that it was powered by a street-tuned version of Ford’s FE V-8 that had vanquished Ferrari a year earlier at Le Mans.

For the 1968 model year, the Shelby Mustangs were treated to a new, shorter front hood; taillights from the 1965 Ford Thunderbird; federally mandated side-marker lights; and simulated mag–style wheel covers. A convertible model was added, and in April 1968, the legendary “King of the Road” G.T. 500KR model was added too, featuring the Cobra Jet 428ci V-8. It became a high-water mark in Shelby history.

Because the lease on Shelby’s facility in Venice, California, was expiring, production was moved to Michigan for the 1968 model year. The 1968s to be converted to Shelby specifications were sourced (partially assembled) from Ford’s Metuchen, New Jersey, plant rather than from San Jose, California, as in past years. The cars were converted by Ford’s collaborator, A.O. Smith Company in Michigan.

For the 1968 model year, Shelby decided to change the name of the car to the Shelby Cobra G.T. 500. The move to Michigan came off mostly without complications, but a riff was growing between Shelby and the Ford Motor Company, as Ford wished to assume control over the Shelby program. Going forward, the Shelby cars would be oriented more as road cars rather than a true race car build. Carroll Shelby remained in charge throughout the 1968 model year.

Production for 1968 totaled 3,018 G.T. 500s and G.T. 500KRs. Frank Chirat’s car shown here was the 726th G.T. 500 built that year. By the end of 1968, the conflict between Shelby and the Ford Motor Company progressed to the point that Carroll Shelby ended his participation in the program. In 1969, Ford took over production of the third-generation Shelby.

Frank and his Sunlit Gold (a half-year color) 1968 Shelby Cobra G.T. 500 are well known in Shelby circles. It is one of the cars built before April 1968 (according to the car’s Marti Report, it was built on December 12, 1967), powered by the 428ci Police Interceptor engine. Frank is the car’s third registered owner. At the time, 102,000 miles showed on the odometer. Over the intervening 38 years, Frank has added another 10,000 miles.

“My first car was a black 1960 VW bug,” says Frank. “I was totally enamored by the 1966 Hertz Shelby, so I painted gold Le Mans stripes and side stripes on my VW. I had installed a Judson supercharger and EMPI headers. One day, walking home from school, I looked in the showroom window of the local Jaguar dealer. But instead of a Jag, there was white 1966 Shelby G.T. 350 sitting there. I said to myself, ‘Someday I’ll have one.’”

In 1981, after a decade in his career, Frank (like many others) got caught up in the “Mustang craze” and started looking for a Mustang. As a service zone manager working for Ford, he was calling on new-car dealer accounts, one of which was Sunset Ford in Westminster, California. They had started a Mustang restoration company and had about 100 Mustangs in their back lot. “I inquired about purchasing one,” recalls Frank. “The service manager at the time said, ‘What do you think about a 1968 Shelby G.T. 500? We have one on the used car lot. It was traded in for a Ford Currier pickup.’ It was at its end of its first muscle car life, but it had the correct Shelby parts and was rust free. He grabbed the keys and I took it for a testdrive, and when we returned, I bought it. It had 102,000 miles on it, and in some places 11 coats of paint. It was a little worn out, smelly, and noisy, but I found out later it was one of 57 four-speed cars in Sunlit Gold.”

“The parts manager of the dealership researched and ordered as many of the Shelby-only parts before they went obsolete,” says Frank. “I stockpiled them for the future restoration. At that time in California, the Shelby still had to be smog-tested, and of course it failed. So I had to put it in non-operational status every other year until the state canceled the smog requirement.”

A year after purchasing the car, Frank had the opportunity to meet Carroll Shelby, who signed the car’s owner’s manual and an original poster Frank had purchased back in 1965 at the Navy Pier in Chicago. Frank says, “For the next 10 years it mainly sat in my driveway under three covers. In 2005, I decided it was time for a restoration and contacted Monroe Weathers at Mustangs & American Classics in Mission Viejo. He said he had a fellow coming in from Australia named Stuart who was a Shelby guy and one to restore the Shelby. For the next two years, a complete, every-nut-and-bolt rotisserie restoration was performed. It was finished and picked up on a Saturday in June 2007, and the following day it was shown in the Cobra Owners Club of Orange County, Concours de Nice show, where it placed first in its class and won Best of Show.”

Since that first show, Frank’s G.T. 500 has become a constant fixture on the Southern California car show circuit. From its debut back in 2007, his Shelby has won 38 First Place awards, 9 Best of Show awards, many Best Paint awards, and an assortment of other awards, including the Shelby International award, Best of Show at the Playboy Mansion, and Best of Show at the Mustang Club of Orange County’s Octoberfest three years in a row (2007, 2008, and 2009), voted on by other entrants, not the judges. One of the shows he attended over the years, his second show, was at the Palos Verdes Concours d’Elegance in 2007, and Carroll Shelby was the grand marshal. Among a huge Shelby class of 11 cars, he took First in Class. Furthermore, at the event’s charity dinner, Frank was able to get pictures and a racing helmet autographed by the legend.

In addition, his Shelby has been driven on two muscle car tours, including one tour that started in San Diego going through Palm Springs, Lake Arrowhead, San Francisco, and Lake Tahoe, finishing in Napa Wine Country. He’s even drag raced it at California Speedway, where, on a fresh engine, the timeslip read 14.01 at 102 mph.

The car’s Marti Report showed that it was originally delivered to Gotham Ford in Manhattan, New York, by ex-drag racer Bill Kolbe, who served as the dealership’s Shelby sales specialist and sold to its first buyer in nearby Brooklyn. The documentation shows that it came to California in 1969 and still retains its original California blue plates. Frank notes with undeniable pride that his Shelby is always driven to the shows, never trailered.

The 1968 G.T. 500 marked the end of an era—the end of Shelby’s direct involvement with the Mustangs that bear his name. These cars bring us back to a time when they truly stood atop the muscle car and ponycar hierarchy. Frank’s dedication to preserving the car for others to enjoy is clear; he’s brought this car back from years of neglect and turned it into a consistent concours winner.

The Police Interceptor (PI) V-8 displaces 428 ci, producing an advertised 360 hp. The Cobra Jet replaced the PI with a lesser-rated 335 hp.
As befits its concours-winning presentation, all the underhood details are factory-correct, like the Autolite battery.
The interior is all business, with this view showing the new-for-1968 padded steering wheel hub with the Cobra emblem.
This car is equipped with the standard four-speed manual transmission with a Hurst shifter.
Called a Shelby Cobra for 1968, the coiled snake and the G.T. 500 decal tells all comers that this is not a car to be messed with.
According to the original sales invoice, this car was delivered with standard wheels, but along the way, it acquired the stylish Shelby alloy wheels.
For 1968, the rear was restyled with the sequential taillamps from the 1965 Ford Thunderbird. Sunlit Gold was a half-year, 1968-only color for Shelby.
The fold-down rear seat was a $44.78 option for the 1968 model year.
The early-1968 sales brochure, printed before the Cobra Jet option became available in April 1968.
The cover of a Shelby Cobra GT salesman’s guidebook, listing both the G.T. 350 and G.T. 500 models, and the competitive selling points for each.
The original sales invoice shows that the car was originally delivered to Gotham Ford in New York City and carried a bottom-line sticker price of $4,795.60, including $89.70 for shipping.
One of the highlights of this G.T. 500’s history was getting an invitation to a muscle car event held at the Playboy Mansion.
Here the body is being prepared as part of its restoration that spanned from 2005 to 2007, done by Monroe Weathers at Mustangs & American Classics in Mission Viejo, California.
The car’s original Shelby Automotive Inc. sales order paperwork designating all the options ordered by Gotham Ford.
Carroll Shelby with Frank Chirat at a dinner reception preceding the 2007 Palos Verdes Concours d’Elegance.
Two national ads ran for 1968; both cars were 1967 models with updated bodywork.