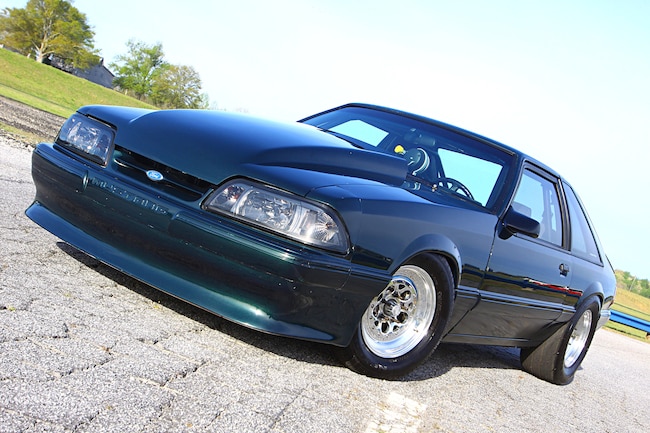 The Mustang has been around for over five continuous decades, so when it comes to building that dream car, the possibilities are seemingly endless. For Jean Aiton, that dream car was built into an 8-second Fox-body street car. “I’ve been told it’s a Renegade car that I force on the street,” Jean says. “I built the car keeping the NMRA True Street class in mind, but more than anything I built it for my enjoyment and to remain a street car.

Jean, a Sergeant at the Huntsville Police Department, left no stone unturned in his search for his perfect Mustang build. Having owned different Mustangs along with several Fox-body Mustangs over the years, he researched many different generations and drivetrain combinations, but he kept coming back to that familiar Fox-body platform.

Jean stumbled across this 1992 Mustang LX on a local Craigslist ad back in 2011. The car was powered by a stock-block 347ci engine with a Vortech V-7 YS supercharger, Lunati Voodoo cam, 170cc Dart Pro 1 heads, a T5 transmission, and 3.73 gears. Exhaust flowed through 1-5/8 shorty headers, a 2.5-inch off-road mid-pipe, Dynomax mufflers and stock tailpipes.

He met the owner at Huntsville Dragway where he watched it make a 6.88-second run at 105 mph in the eighth-mile with easy launching and granny shifting. He knew the car made decent power and had potential despite its stock computer, Super FMU, heavy wheels, stock chassis and all factory suspension.

Originally the car was painted Deep Emerald Green but is now slathered in Jewel Green Metallic after the body shop used the wrong paint code for a 1993 Bronco. Heath Terry, owner of Southside Rods and Resto in Arab, Alabama, spent 50 hours wet-sanding and fixing the mistakes made by the previous painter.

Jean’s Fox is now powered by a Ford Racing A4 302-based 8.2-inch deck block bored and stroked to a 349ci with a compression ratio of 10:1. An Eagle 5.4 crank works in conjunction with Diamond pistons via Eagle H-rods and a custom grind on a Comp hydraulic-roller camshaft. The engine was built by Dale Meers Racing Engines in Buffalo, Kentucky.

“The heads were ported for the NMRA Renegade class. They were formerly on Mike Post’s Renegade car,” Jean tells us. Extensive work on both the intake, exhaust ports and bowl work with a lot of attention paid to mid-lift flow. It features titanium retainers with 8-degree keepers and locks, 1.550-inch diameter dual springs on intake and exhaust with a damper. The Seat pressure is 150 lbs. and 440 lbs. open at .600-inch lift.

To really amp up the power, a Vortech V-7 YSi with a max of 28 psi is mated to a custom throttle-body and features a Vortech 50mm cog crank pulley; the upper cog pulley varies depending on running a street or race tune. A standalone Speed Density MAF helps keep things in check, and a Blowzilla blow off valve is mounted on the 4-inch intake pipe. With the Meziere 55gpm water pump, custom radiator and twin fans pushing 3,412 cfm, keeping cool in Alabama hasn’t been an issue.

“I stayed with a supercharger rather than a turbo for a couple of reasons. I have always enjoyed the sound of the supercharger and the exhaust with the more aggressive cam profile than a turbo combo. I enjoy the car being so aggressive sounding and that also fits the look of the car,” Jean explains.

Adding to the orchestra are 1 7/8-inch powder coated Hooker headers that flow down to a modified 3-inch X-pipe and Spintech Super Pro Street 9000 series mufflers.

Huges Performance from Phoenix, Arizona, built the Extreme Duty 4L80E with a fully manual valvebody and transbrake. It also features a PST steel driveshaft complete with a Stifflers safety loop, and a Derale cooler with a fan keeps everything at temp. The 4,000-stall helps launch the car along with a Custom PTC Billet lockable converter. “With the 4L80E I can enjoy even highway speeds because of the overdrive. With the ability to lock my converter, at 70mph in overdrive with the converter locked I’m only at 1,200 rpm’s,” Jean says. Shifting power is provided by a Kilduff Machine shifter with polished sticks, a powder coated knobs, and transbrake switch.

The cabin features all the factory interior enjoyments except for air conditioning and power steering, but a Flaming River manual rack makes steering a breeze. It still has the factory LX seats, but the back seats have been narrowed to clear the Wolfe mini tubs while still retaining the rear folding function. For safety, an 8.50 certified Wolfe 10-point Chromoly cage is tig welded inside. Jean modified the center console to fit around the Kildruff Machine shifter while still featuring two cup holders. Because street car.

The interior features stock LX cloth seats but the back seats have been narrowed to clear the Wolfe mini tubs but still fold functionally. For safety, an 8.50 certified Wolfe 10-point Chromoly cage is tig welded inside. Other safety equipment includes a Simpson 5-point harness with quick release and Stroud window net. The interior also features a Scott Rod Fabrication center console that Jean modified to fit around the Kildruff Machine shifter. He also installed custom-made billet LED laser etched buttons for the engine fan, transmission fan, water pump, converter lockup, line lock and transbrake that were made in Australia. Let’s not forget the two cup holders in the center console, well, because street car. A Wolfe parachute mount with a Simpson parachute really help to halt things with a quickness.

“The main intention of this car is to remain a streetable 8-second car. The car has good street manners considering how extensive the modifications are,” Jean tells us. “Not many cars at this level anywhere can you reach in and turn the key to start it and it stays running. Chris Terry of CTR Race Cars has done an amazing job keeping the street manners in check without any surging or bucking.

A big thanks goes to Jean’s wife Emile, and his twins Hailey and Hunter, Chris Terry for all the tuning and suspension details, Heath Terry of Southside Resto and Rods for paint and body details, Pet Herron of Pro-Tech for chassis work, Scott Rod Fab, Jason Meador of Fastang Custom Fab, Dale Meers of Dale Meers Racing Engines, UPR, and Wolfe Racecraft. Another Thanks goes out to Alton Clements and Brian Mitchell.

The new setup has yet to be tested. “We are expecting four-digit power numbers and running at our 8.50 certification won’t be a problem.”

Jean Aiton, Sergeant at the Huntsville Police Department, built his dream car, a killer 8-second Fox-body street car. After searching different Mustang platforms and combinations for his build, he knew he had to build a mean Fox-body, and he left no stone unturned. Jeans says everyone tells him its a Renegade car he forces on the street. “To each their own, but for me, nothing delivers that feeling of a sledgehammer to the face like a nasty Fox-body.” 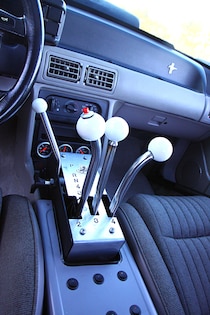