The Flying Beer Can 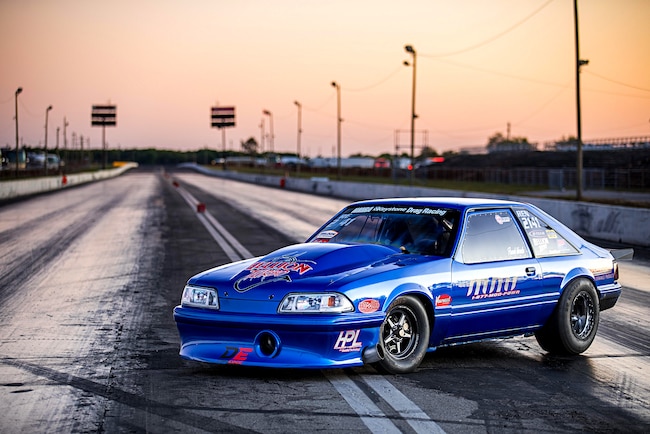 The Hellion Racing team has been a huge part of NMRA drag racing since nearly the sanctioning body’s inception. It began with its founder John Urist and within a few years their racing obsession transitioned into one of the largest turbo kit-manufacturing companies in the aftermarket—Hellion Turbo. That is where the Hellion Racing division enters the picture, as the marketing and fun component of the Hellion brand, Urist and his business partner Dwayne James bring a collection of hot rods to the NMRA. Urist is the main team car, which is unofficially referred to as the “A-team” while Dwayne brings two cars to the party and they call it the “B-Team.”

The B-Team has had an illustrious career in national competition, first in the small-tire Super Street Outlaw wars with a supercharged 1994 SVT Cobra. The group stepped up to a twin turbocharged Outlaw 10.5 Mustang, before parking the operation for a few years. But a random night of bench racing at their favorite bar would drag the B-Team crew back into the NMRA family and within a few years the team added a second a car, which is the one featured on these pages.

The first car that B-Team put back on track in 2014 was a copper-hued Fox-body Mustang and longtime crew member Frank Varela was tapped to handle the driving chores. The team dominated Coyote Modified, setting records, earning a championship, and Rookie of the Year honors.

The concept was simple, stuff a turbocharged Coyote engine in a stock suspension Mustang and go fast. Dwayne was the crew chief and Frank drove through everything that was thrown at him. But he yearned for more speed, stepping away from Coyote Modified and back into his own Mustang race car for 2015.

Frank had raced a Mustang that packed a unique history, first it had been used to win a NMRA championship in the early 2000s before being bought by his brother who then passed away and Frank took possession of it. They would use the same winning formula and bring the same high-level of competition as they stepped it up to the Renegade ranks.

“We took what we learned from Coyote Modified and put it into the Renegade program,” explained Frank. The glaringly obvious rule differences allowed for a larger turbocharger and an air-to-water intercooler. The Mustang’s old supercharged 331ci powerplant was sold off and the team added a new MMR Pro Mod Coyote engine to the mix. Frank also updated the car, slathering the Mustang in blue paint with Bud Lite inspired graphics. For performance, they upgraded the suspension system with UPR parts, Santuff front struts and AFCO rear shocks. The B-Team would eventually strip the car of its GT ground effects two years ago in the name of weight savings, giving it the look it carries into competition today.

Frank Varela shows that a Coyote-swapped Fox-body Mustang is way cooler than an LS-swapped one. His Flying Beer Can runs 7.30s at over 187 mph.
Varela dominated Coyote Modified before moving up to Renegade. He’s in the hunt for his second Renegade championship and has two wins and two runner-up finishes in 2018.

As Haley James daughter of the B-Team’s leader, took the reigns of the Coyote Modified program, the three-car Hellion Racing team began chasing championships immediately. “We headed to Florida for the first race in 2015 without a clue,” claimed Frank. Despite his humble memory the team appeared to have their game plan firmly set in place by evident of the results. They walked away with the Renegade record and a class win. “We raced against the biggest names in Renegade like Brian Mitchell and Bart Tobener, we knew then that we could run with those guys.”

Frank went on to win a second championship in 2015 with the Renegade car and his teammate collected the Coyote Modified title. For his efforts as the tuner, Dwayne was awarded the prestigious Crew Chief of the Year by the NMRA community. Coming off a race season like that is a challenge for any team with a target on their back, but Frank scored a Top 10 finish in 2016 and was runner-up in the championship hunt in 2017. As of this writing, he is on his way to a third title in 2018 having visited four of the five final rounds of the season, collecting two wins and two runner-up finishes.

The Flying Beer Can that Frank rides into competition uses a tried and true program that is prevalent in all three Hellion Racing team cars. MMR provided its popular Pro Mod level Coyote package. That means a Ford block gets Gen 2 sleeves and then stuffed with Manley custom pistons and connecting rods. The valvetrain is sourced from MMR and a pair of ported Boss 302 heads sits on top.

The turbo system is a custom setup built by the mad scientists at Hellion Racing and it is centered on a Precision 76mm turbocharger. Frank was hesitant to reveal the boost numbers but he said they’ve tested nearly a dozen turbochargers in various configurations and this one produces the best results. Backing the 1,600hp combination is an M&M Transmission Powerglide and a Pro Torque torque converter is responsible for transferring the power to the Mickey Thompson ET Radial Pro 275 tires.

On track, Frank has posted a personal best ET of 7.34 at 187 mph in Renegade-legal trim and that came by way of an insanely quick 1.10 sixty-foot time. Those performances are both just one tick behind the national records but it is the title that Frank is most concerned about earning.

Regardless of the outcome of the season, this will be the last in the Flying Beer Can for Frank, but it won’t be the final party of the B-Team. He has a new ride coming together as that lure of quicker and faster is hard to ignore. Frank’s nephew, Ivan Varela, is building a new Street Outlaw/X275 Mustang for him. Once it is finished, Frank will return the Flying Beer Can to Ivan to race in memory of his father. For 2019 and beyond, the B-Team isn’t changing their winning formula, either, as a turbocharged Coyote will be the powerplant of choice. A new MMR Gen X billet engine block is sitting at Hellion Racing headquarters awaiting its new rotating assembly, MMR valvetrain, and ported GT350 cylinder heads.

With a vibrant racing past, current championship contention, and a future of continued winning performances, Frank’s Flying Beer Can is one that never runs dry in the performance department. 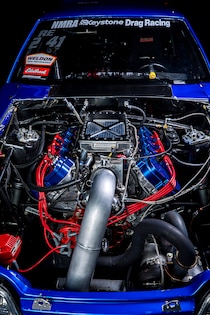 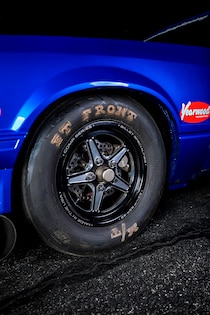