Bullitt on the Outside, Shelby on the Inside

Bullittude: This October marks the 50th anniversary of the release of Bullitt, the greatest car-chase movie of all time—this is John Jeffers’ tribute to Steve McQueen and the Bullitt 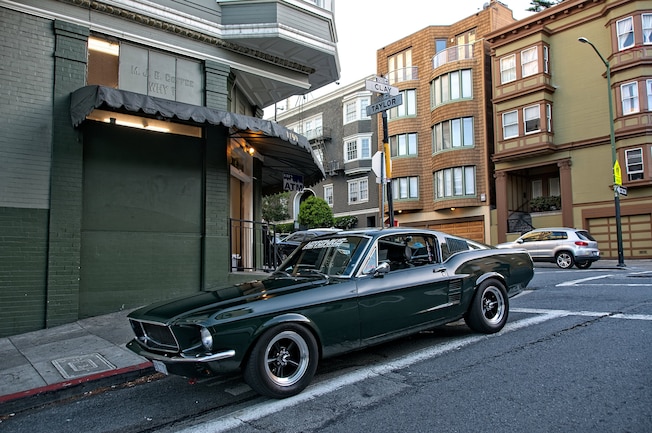 John Jeffers’ dad owned a muffler shop that he basically grew up in, keeping the shop clean, learning how to weld, and working on cars starting at the age of 10. In 1975, before he could drive, he helped his Dad rebuild the 283ci small-block Chevy engine and its T-10 four-speed transmission and clutch on his 1933 Ford pickup street rod. Later, all this knowledge would come in handy when restoring the car presented on these pages—a 1967 Mustang fastback.

This story really starts when John’s younger brother Phil found a clean Dark Metallic Green 1967 C-code Mustang fastback he wanted to buy at a local used car dealership, but he was still in high school and didn’t have a job yet. “My parents told him no,” says John. “I had always wanted a Mustang like Steve McQueen drove in Bullitt, and now was my chance. I told them, since Phil couldn’t buy it, I wanted to buy it. They told me no as well. I kept being persistent. I knew I wouldn’t get another chance at finding a fastback like this for $2,500. I told them that I could afford the car payment. I was already working full time and had paid off my 1978 YZ 250E while I was a sophomore in high school, working after school. They finally gave in and let me buy it and co-signed for the loan.”

“As soon as I could, I went down to the used car lot to put a down payment on it,” recalls John. “I tried to talk the old man that owned the used car lot down on the price. He told me, ‘Look kid, I have five other guys that want this car too. It’s $2,500 bucks or hit the road!’ I thought he was being a jerk. But, it was his car, and I wanted it. So, I reached down into my pocket and slammed $500 down on the hood and said, ‘It’s Mine!’ I couldn’t wait to get home and tell my parents. My dad was watching the news and told me that Steve McQueen had just passed away. It was a bittersweet day for me.”

Jeffers prefers the cleaner look of the 1967 Mustang to the 1968 model, without the mandated-for-1968 side marker lights.

“But, I now had a Mustang like Steve McQueen drove in Bullitt, even though it’s a year earlier than his was. I no longer had to stay up until midnight to see the movie just to watch the chase scene. I now had one like it in my parent’s driveway.”

Like most teenage gearheads, John modified his new acquisition with dual exhausts with turbo mufflers, American Racing wheels, and to get the right stance, a set of air shocks to raise the back end up a little. Last but not least was the stereo, a Pioneer KE-5100 AM/FM/cassette with the famed digital SuperTuner that could pull in distant stations. (In 1981 these units cost $350. Today, that’s the equivalent to more than $1,000.)

“On Friday nights I would meet up with my buddies to go cruise the boulevards of Southern California,” says John. “My buddies had a 1968 Firebird, a 1969 Mustang coupe, a 1967 Malibu, and one had a 1979 Z-28. We would start with Whittier Blvd. Then we’d head for Sunset Blvd., then Hollywood Blvd., and then all the way over to Van Nuys Blvd. Then reverse the route back home. I’d get home about 3 a.m.”

But over the years John’s Mustang evolved. It was built to honor his two heroes: Steve McQueen and Carroll Shelby. “Since I bought it on the day Steve McQueen passed away, when it came time to paint the car, there was only one choice: Highland Green with a Satin Black tailpanel,” says John. “I’ve always loved the 1967-1968 body style. Next, I gave it the heart and soul of Carroll Shelby. That meant a 289 High Performance with World Product heads. Next, the four-speed trans was rebuilt. Down the road came AutoMeter performance gauges, a new dashpad, ProCar 2000 bolstered seats, five-point harnesses, four-point rollbar, the 1966 Shelby package tray, and a fullsize spare tire.”

Under the hood, the look of the 289ci small-bock V-8 is enhanced with a set of Cobra valve covers and air cleaner.

After painting the car in 2012, the first Mustang show he entered was Mustangs at the Queen Mary in Long Beach, California, which was a very fortuitous thing. A representative from Hotchkis Sport Suspension noticed the car, and after a short discussion, John allowed them to use it to develop their new TVS suspension for ’67-’68 Mustangs. It was then used in the Hotchkis booth at the SEMA Show in 2017—parked with a ’68 Dodge Charger in a recreation of the famous chase scene from the movie.

On Saturday the group went to City Hall, where June 20th was proclaimed Bullitt Day by the Mayor; then it was off to drive the Bullitt chase route. Then John started recognizing were he was at, saying, “I was at the very beginning where the Charger takes off. I was finally going to live out my dream of driving the same route Steve McQueen drove in Bullitt.”

“After we finished the chase route we headed to Crissy Field at the base of the Golden Gate Bridge for the meet and greet with Chad McQueen. He was going down the rows of Bullitt Mustangs, signing autographs and taking pictures. When he walked over to my Mustang he said to me, ‘So, tell me about your car.’ Then I began telling him how since I was a kid watching Bullitt with my dad, I’ve always wanted a Mustang like his dad drove, and how I bought it on November 7, 1980, the day his dad passed away. He looked at me and said, ‘You were meant to have this car. My dad would be proud of that.’ I liked his movie so much that I would build one like it to honor him. Then I asked him if he would sign the dash. He did.”

For track-day duties, the interior is updated with ProCar seats, a five-point harness, and a four-point rollbar.
One of the highlights of Jeffers’ ownership of the car came in 2013 when Chad McQueen signed his glovebox.

John continues, “The next day we headed to Danville for the car show at the Blackhawk Museum. As I was getting off the freeway my clutch adjustment rod broke. I coasted as far as I could up the offramp, and then called AAA. Then a white Cadillac Escalade went by with Chad McQueen hanging out the window telling the driver to pull over. He got out and walked over to me and said, ‘Whatever’s wrong we’ll get you back on the road.’ I told him the tow truck was on the way and would be going to the show with it in tow. But you’re the guest of honor at the show and people are waiting for you. I’ll be fine. Then he asked if he could offer my wife a ride to the show with his wife since this really wasn’t a very safe place for a lady. As I turned around to ask my wife if she wanted to go with Chad she was already getting in the Escalade. Chad told me to find him so he could help me get the parts I needed. Then the tow truck came and towed me to the show. Chad gave me a number to R Mustangs in Frisco, and they had the part. I had it towed back to R Mustangs and Richard had us back on the road. Chad McQueen is just like his dad—the King of Cool.”

Mustang Monthly caught up with John earlier this year when he participated in the celebrations for the 50th anniversary of Bullitt’s release on October 17, 1968. One of the centerpieces of this year’s events was the annual car show at Boys Republic in Chino Hills, California, a school where a troubled teen, one Terence Steven McQueen, attended. At this year’s show there were dozens of Bullitt Mustangs—1967-1968 tributes, the 2001 and 2008 remakes, and two preproduction 2019 Bullitt Mustangs, many of which had driven from Chicago to Santa Monica on Route 66.

What could be more perfect for a Highland Green 1967/1968 Mustang fastback than American Racing Wheels 15x7 Torq Thrust originals? Tires? BFGoodrich T/A Radial P225/60R15s all around.
John Jeffers has owned his 1967 Mustang fastback since November 7, 1980, purchasing the car the day Steve McQueen passed away. Another highlight of Jeffers’ ownership of the car has been to drive it on Marina Blvd. for the 45th and 58th anniversaries of the October 17, 1968, release of Bullitt.

The day after Saturday’s show we traveled with almost two dozen members of the group up to San Francisco. A Monday morning drive over the Bullitt chase route was planned, but we had our own idea. On Sunday evening, with Chris Wlodyka, who owns a 2001 Bullitt Mustang and had driven the entire route, we set off for two locations—Bullitt’s apartment at the intersection of Taylor and Clay, and Marina Blvd. along San Francisco Bay where the chase moved to after the streets of San Francisco. We were able to capture John’s Mustang in exactly the same spot with the Fort Mason Center in the background, just like when director Peter Yates captured McQueen’s Mustang 50 years earlier.

John’s Bullitt tribute is a multipurpose car; the five-point harness and four-point rollbar make the car track-ready. John has participated the open track event at the Mustang 50th Celebration at Las Vegas Motor Speedway, where the Hotchkis TVS suspension system was put to the test.

John explains, “My friend Brian ‘The Pusher’ Mayfield made a comment to me that ‘I see a track car in the making.’ He also invited me to Willow Springs International Raceway in Rosamont, California, to run with the Cobra Owners Club. The first time I went I couldn’t believe I was going to drive on the same track Steve McQueen, Carroll Shelby, Pete Brock, Jerry Titus, Dan Gurney, and many others had driven. At first I was nervous, but by the time I was sitting on the grid waiting for the green flag that nervousness turned into adrenaline. This is what I built my Mustang for, to be able to feel what Carroll Shelby felt behind the wheel of his G.T. 350. Every endless hour I put in was about to pay off. After a few laps I started to get more comfortable with the track. Now I consider Willow as my home track.”

John summed up his story by saying, “I call my Mustang Bullittude. It’s a Bullitt with attitude. Bullitt on the outside, Shelby on the inside, and John Hotchkis gave it all attitude.” 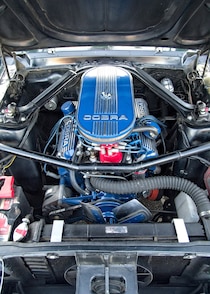 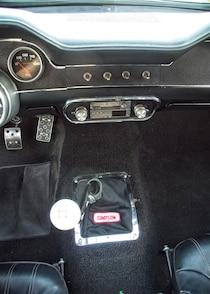 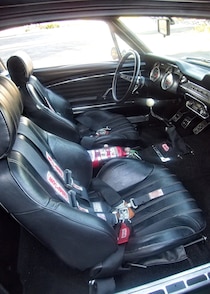 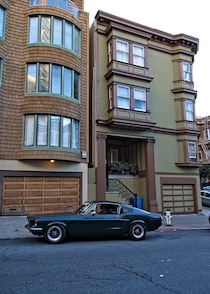