He Bought His 1971 Mustang Mach 1 New as a Teenager, Sold it to his Uncle, and Bought it Back 28 Years Later 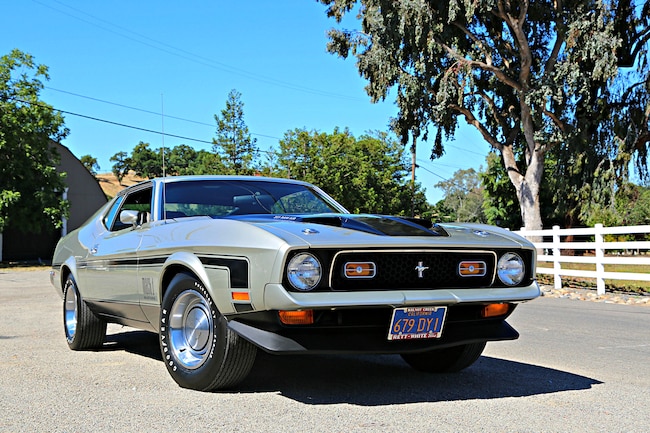 As soon as he could hold a toy car in his hand, the fixation with cars began. As a kid, Mike Querio spent hours leafing through car magazines, racing slot cars with his friends, building model cars, and loitering around car dealerships collecting sales brochures near his home in Walnut Creek, California.

Mike grew up around cars and trucks, and his father favored the “Family of Fine Cars” produced by Ford. The Rett-White Ford dealership was located just next door to their family-owned trucking company in Walnut Creek, and his father was a good customer. Querio remembers Fords were always in the driveway. “My mom had a 1957 Fairlane,” he says, recalling his childhood. “One day my dad traded it in on a new 1968 Mustang coupe without discussing it with her. I thought it was great, but she did not. My mother complained that the Mustang was too small for a family car, and of course she was right. Soon the Mustang was gone, replaced by a brand new 1969 LTD with a 429 under the hood.”

Determined to have a new Ford of his own, Mike set his sights high. For his first car, he would not settle for a used one or a family hand-me-down like most teenagers. He not only wanted a brand new Ford, but a hot new muscle Mustang. All through high school he worked hard at the family trucking company, plus he worked as a busboy in the evenings. Most Friday and Saturday nights his friends were going to movies or on dates while he worked at the restaurant. The tips were much higher on the weekends, and he wanted that money to buy his car. He still rode his bike to school even after he and all his friends got their driver’s licenses.

As soon as he graduated high school, cash in hand, he went to the Ford dealer to purchase his dream car: a new 1971 Mustang Mach 1. The newly restyled, lower, longer, and wider 1971 Mustang SportsRoof featured a windshield slanted at a 60 degree angle (a slope increase of 5.5 degrees). The extreme fastback design came with an almost flat back glass that looked sporty, but offered minimal visibility for the driver. It was an interesting and futuristic design to Mike, who was about to begin college as a design student. After all the hard work, hours of lusting over images of the new Mach 1 in magazines, and drooling over them at the nearby Ford dealer, at 18 years of age, Mike was ready to place his order.

Larger than the ones that came before, the 1971-1973 Mustangs are considered the final restyle of the first generation. Mike Querio drooled over these cars at his local Ford dealership as he saved money for his very own Mach 1.

He knew precisely what he wanted from the option list. The first thing he specified was the 429 Cobra Jet engine with a four-speed transmission, Hurst shifter, and Traction-Lok differential. He also chose front power disc brakes, power steering, and a set of F60-15 white-lettered Wide Oval tires. He chose not to opt for the popular Magnum 500 wheels, knowing he was going to mount some aftermarket mags on the car soon after he took delivery.

Wanting some luxury to go with his muscle, he checked off several deluxe interior options, including the Mach 1 Sports interior group, a tilt steering column, console, instrumentation group, Sport Deck (folding) rear seat, tinted glass, and a “Stereosonic” eight-track tape system with AM radio. The most expensive and lavish luxury item ordered was air conditioning at a cost of $412. The finishing touch was to order the car painted in Light Pewter with optional body side tape stripes. The only thing left was to wait for his dream car to be built. Or so he thought.

A few days later the Ford dealer called. The salesman told him he received a Telex from the Dearborn factory informing him that Ford had discontinued the 429 engine in the Mustang. After some thinking and number crunching, the order was changed to an M-code 351 four-barrel with Ram Air. He could have ordered the higher-horsepower Boss 351, but that would have been more money, and he was tapped out financially.

During the years Mike’s uncle owned the Mach 1, he installed a hopped-up 351 Cleveland. But the original-issue M-code 351 was stored right next to the car and went back in it during the restoration.
A look under the hood shows the functional Ram Air plenum and the bottoms of the twist-style, chrome-plated locking hoodpins that came as part of the package.

In August 1971 Mike took delivery of his new Mach 1, and not long after he started to personalize the car. The steel wheels with hubcaps and trim rings were among the first things to go, replaced by a set of 15-inch slotted mag wheels mounting big, L60-15 tires. He jacked up the back of the car and installed a set of Gabriel Highjacker shocks and traction bars. Under the hood he installed a set of Hooker headers and an ACCEL Super Coil. The stock intake and carb were removed in favor of an aluminum Offenhauser intake and a Holly 780 carb crowned with a Cobra air cleaner. A set of fog lights was installed, as well as a pair of rear stereo speakers. At a local body shop, he had a radio antenna frenched into the right quarter-panel. Some of these mods might make you shriek today, but in the early 1970s they were considered cool by many.

Most young men would have tossed the original parts removed from the car and forgotten about them, but Mike was not your average young man. As he explains, “A lesson I learned from my Dad when we started to restore Model A Fords in the 1970s was to always save your original parts. You never know when you’re going to need them. So I boxed them all up and stored them in the attic.”

In 1975 his then-girlfriend (later his wife) purchased a 1966 Shelby G.T. 350. After riding in and driving the Shelby he was hooked and wanted one for himself. Mike purchased a 1966 Shelby for $3,000 for himself, but that meant the Mach 1 would have to go. His uncle had always liked the Mach 1, so he sold it to him, along with all the original parts he had stored, with the stipulation that his uncle would offer him the car first if he ever decided to sell it.

Mike’s desire to return the car to absolute as-delivered condition meant putting steel wheels with hubcaps and trim rings on. He originally ordered the car that way, instead of ordering Magnum 500 wheels, knowing that an upgrade to slotted mag wheels was in his plans.

That stipulation took effect 28 years later when, in 2003, his uncle asked him if he would like his old car back. Of course he said yes and went over to pick up the car. His uncle had installed a hot rod 351 Cleveland engine, but he had only put 5,000 miles on the car the entire time he owned it.

Even though the car was in need of restoration, it had gone only 70,000 total miles, and it had been parked inside a garage the entire time. As part of the deal, the replacement engine would go back to his uncle, however the original engine was sitting in the garage right next to the car. His uncle had saved all the original parts Mike had given to him with the car and handed everything back to him, still in the same boxes he had packed them in.

The Mach 1 was in really good condition, with a well-preserved original interior and an uneven, but original, metallic paint finish. After 30 years, Mike had grown out of his teenage hot rod tastes, and in 2007 and decided to return the Mach 1 to exactly how it looked when he took delivery in 1971.

Long-term storage by his uncle kept the original interior in Mike’s Mach 1 in mint condition.
Mike treated himself to a few interior amenities when he ordered his Mustang, including a tilt column, a console, air conditioning, and the eight-track/AM radio.
If you were a teenager in the late 1960s to early 1970s, your tape selection probably looked a lot like this, too.

It was time to remove all the aftermarket parts Mike had bolted on it when he was a teenager. “I had to un-screw-up my own car,” he says. “I wish I could go back and talk to that 19-year-old!”

As restoration began, the car revealed itself to have a super-solid body and an exceptionally clean interior, including a beautiful, and intact, dash pad. One of the challenges was repairing the damage to the rear interior sheetmetal where speakers were mounted more than 30 years ago. To do the repair to the damaged speaker areas correctly, an entire rear clip section from another 1971 Mustang fastback was acquired. The needed metal was surgically removed and carefully installed in Mike’s Mach 1 to look perfect. A bonus was a set of N.O.S. carpets, purchased by his uncle years ago at the Ford dealer, still in the original box.

The restoration took about a year to complete, and the result is stunning. Everything on the car is now correct. Resisting the urge to add Magnum 500 wheels, a rear spoiler, or any modern upgrades, Mike took great pains not to deviate from the build sheet, returning his car back to exactly as it had left the factory. Having all the original parts was a big help.

The pop-open gas cap was available on the 1971 Mach 1 only; it was replaced by a more conventional twist-style cap for 1972.
Today the Mach 1 triggers an early-1970s flashback for Mike every time he gets behind the wheel. He loves popping in an eight-track tape and going for a drive, back to 1971.