Sleeper CJ: Tim Tomezak’s 1969 Cobra Jet Mustang SportsRoof is rare to be sure—and has a backstory to boot 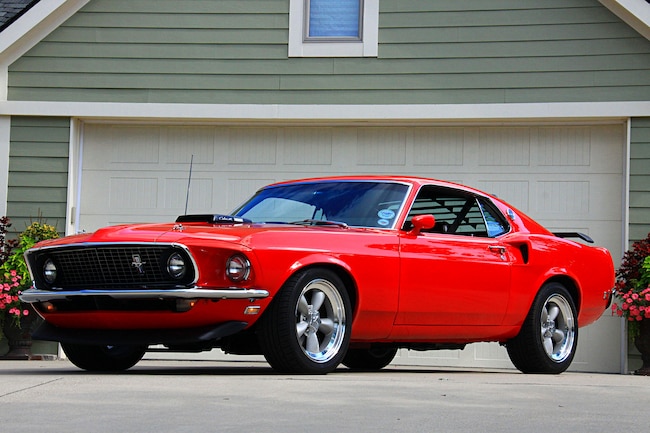 Sometimes you find the darndest stuff where you never expected to find it. I was visiting with a longtime Ford buddy, Art Cairo of suburban Detroit, who owns Henry Ford II’s personal one-off 289 Hi-Po Mustang hardtop, when I heard a soft rumble out on the driveway. It was this car—a 1969 Cobra Jet SportsRoof, far from its original birthplace in San Jose, California. Interestingly, it was also delivered to DSO 72, Ford’s San Jose sales district not far from the Milpitas assembly plant, at Frank Cate Ford in Elk Grove just outside San Jose where it was born.

When Ford bucked this Mustang body nearly a half-century ago it was clad in Black Jade, which is a very dark metallic green. Black Jade isn’t a very popular color, and we’ve seen our share of Black Jade cars that became a different color—a popular color in 1969 but not so popular today.

What inspired Tim to buy this car in an online auction was its engine, Ford’s legendary 428 Cobra Jet FE big-block mill. “As a fan of classic Mustangs with FE power, I bought a 1967 fastback with a transplanted 428 Cobra Jet amped up with dual-quads and a Top Loader four-speed. I was ready to rock,” Tim tells Mustang Monthly, adding, “Although that ’67 Mustang was a blast to drive it needed a lot of work.” Tim ultimately sold the car to seek what he really wanted.

Tim scratches his head regarding the Cobra Jet Shaker hoodscoop. He has seen them with “Cobra Jet” only and the combination “Cobra Jet 428.” Does anyone out there know what’s correct?
Vintage Wheel Works five-spoke 17-inch wheels wrapped in Falken rubber make the ride. Tim gets great handling and looks from both.

The raw appeal of the FE series big-block was its real-world torque—not the simulated torque of today’s modern overhead-cam small-bore/short-stroke screamers. The 428 Cobra Jet employs big displacement, meaning a 4.130-inch bore diameter with 3.980 inches of stroke. We’re talking 4 by 4 inches of ground-pounding twist at the traffic light and in the water box.

The Cobra Jet, with its brute torque, stood NHRA Super Stock on its ear at the Winternationals in January of 1968. No one knew it was coming until it arrived and began spanking GM, Chrysler, and AMC pony cars and intermediates. “What the hell is in that Mustang?” veteran drag racers asked.

By today’s high-tech standards, the 428 Cobra Jet is a dinosaur. However, it will still crack a 10-11–second quarter-mile elapsed time without breaking a sweat. It rocks. It rolls. It gets the attention of nostalgia fans who fondly remember what it did to the competition in 1968.

Tim grabs the wheel and shifter flat, getting after the 428’s brute American big-block torque. This is a point-and-shoot Mustang SportsRoof with 428ci, three-speed automatic, and 3.50:1 Traction-Lok. It delivers torque along with good open-road manners.
Ford’s 335hp 428 Cobra Jet was underrated to stay off the radar of insurance companies and Washington. More realistic figures were closer to 375-400 horsepower. This engine makes raw torque and horsepower with the butterflies pinned. Note this one still has its Thermactor emissions system.

After Tim sold his 1967 fastback, he began a diligent search for a big-block Mustang. First, it had to be a matching-number original. Second, it needed to have that all-business look and attitude of something like a Trans Am Boss race car. These requirements narrowed the field considerably.

When it was time to buy, the web brought Tim only two listings, both at auctions. He missed the first one, which left just one coming up for auction that ultimately became his. It was this one, bucked November 11, 1968, at Ford’s Milpitas, California, plant, one of 14,663 Cobra Jet Mustangs produced in the 1969 model year.

Back in the late 1960s, Ford customers could order a new Mustang just about any way and in any color they desired. There were unique rides like this one, an odd duck someone ordered to please themselves and no one else. This was a plain-Jane 1969 Mustang SportsRoof with standard black vinyl interior and no other appointments. It was ordered with one agenda in mind—to go fast. This was a really vanilla SportsRoof ride with dog-dish hubcaps and biased belted tires. No Mach 1 option. Forget Grande. Not a convertible. Vanilla bean, no frills, 63A body code not likely to ever stand out in a crowd until the pedal hit the metal.

Optional Sports Slats keep bright sun off your back.
Pure Michigan, pure Detroit/Dearborn power born in Ford’s dynamometer laboratory a lifetime ago, not to mention dragstrips across the land.

Tim tells us his SportsRoof received a full-scale restoration some time in its past that included quarter-panels and a floorpan, both odd for a California car. Color was changed from Black Jade to Candyapple Red. The interior was originally Dark Ivy Green, changed to black vinyl.

The seller had owned this car for seven years, driving it very little—just 200 miles in all that time. “To make the car safer,” Tim comments, “all systems that suffered from a long storage period had to be freshened up including brakes, carburetor, fuel system, electrical system, and even the Thermactor smog pump.” Tim took delivery, got the car ready for action, and brought it to Detroit’s legendary Woodward Dream Cruise. He lives not far away in Waterford, Michigan, where sunny, drivable days are quite rare. “Once the Mustang was back on the road, I was not satisfied with its handling,” Tim laments. “I opted for a good aftermarket Street or Track coilover front suspension system, which is made in Michigan.”

Tim adds, “The Street or Track suspension system consists of new upper and lower control arms and Bilstein coilover shocks that connect to the lower control arms only. You get the Shelby drop attachment point for improved negative camber gain during body roll.”

“The big, heavy FE Mustang will never handle like a small-block Boss, but is now capable of handling far exceeding the factory’s Competition Suspension option,” Tim comments. “This modification lowered the front end 2½ inches. The front-end drop, in concert with 17x8-inch front and 17x9-inch Vintage Wheel Works five-spokes and P235/45R17 and P255/45R17 Falken tires, made all the difference in both handling and great looks.”

Tim didn’t stop at skins and wheels. The C6 has been completely rebuilt, including a B&M Shift Improvement Kit. Mach 1 appointments such as rich woodgrain were added. “My SportsRoof is complete and is certainly a blast to drive.” Tim adds, “Big FE torque lights up those Falkens leaving any traffic light quickly, then cornering at the roundabout at the next freeway exit. Next on my wish list is an engine rebuild to fully restore this engine’s original look and function. After that, fresh seat upholstery in order to stay put and enjoy the car’s great cornering capability.”

When Ford stylists redesigned the fastback, they gave it pop-out quarter-windows and a simulated quarter scoop along with broad-shouldered quarter-panels. This was a nice departure from the 1965-1968 fastback. Ford’s marketing types renamed it SportsRoof.
Inside is Ford’s standard black vinyl interior. Yet it sports restomod nuances like red door bottoms, Mach 1 woodgrain, and aftermarket instrumentation. The eight-grand tachometer is factory original. You’d expect to see Knitted Vinyl Sports Interior high-back bucket seats in this otherwise vanilla SportsRoof. Instead, it’s the original standard black vinyl bucket seats with head rests, which became mandatory in 1969.
This is the Ford-Thompson power steering pump common on 1965-up Mustangs. From 1965-1966, the Thompson pump had a large dipstick housing. Beginning in 1967, it had a small dipstick tube like this one. The Cobra Jet got a larger drive pulley to reduce rotational speed at high engine rpms. Check out the power steering fluid cooler.