How Tab Lagow Built, Then Sold, and Then Bought Back His 1966 Mustang Convertible—Completely by Accident 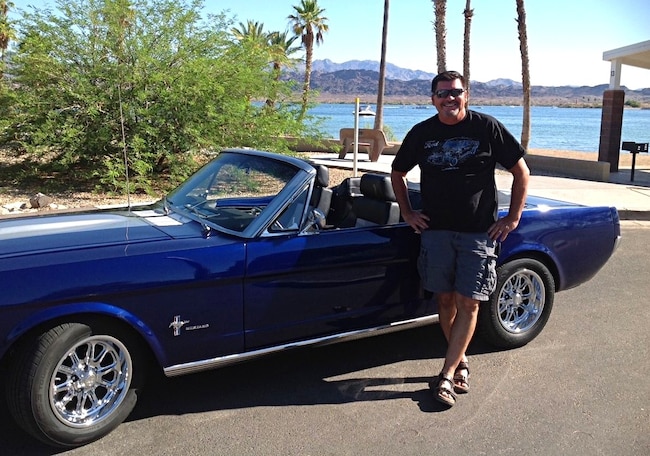 We all have “the one that got away” and dreams of one day getting it back. This is not really one of those stories, but it’s similar in that it is about a Mustang that left, then came back home years later.

Tab Lagow grew up in California and had a side hustle of buying, fixing, and flipping cars, usually Mustangs, for extra money. He had never owned a Mustang convertible before, so began looking for one to work on in 2003. He found one on eBay and placed a bid, and when the auction ended the car was his for $1,000. Once it arrived, Tab assessed the car’s situation, saying, “It came from West Virginia and was a total rust bucket, so I started stripping the car down and cutting out all the rust, and for the next few months I started replacing metal and purchasing some replacement parts.”

Check out the plate.

As the car was coming together, Tab’s personal life took a turn and he ended up getting a divorce in 2007, which forced him to sell the unfinished convertible, mostly in pieces, to someone in the Los Angeles area looking for a father/son project. Once back on his feet after a job promotion and a relocation to Bakersfield, CA, Tab satisfied his Mustang urges by buying a 1964 ½ hardtop and restored it over the next few years. By 2015, he was remarried and spending the summers in Lake Havasu, Arizona, and if you know the area, summers there are HOT. The hardtop didn’t have air conditioning, making the drive incredibly sweat-inducing, so Tab and his wife Dana decided if they were going to be uncomfortable, they might as well get a convertible. So they sold the hardtop and Tab went back to eBay and Craigslist looking for the next project.

He found a ’66 convertible in San Diego and bought it for $7,000, saying “The car had a clean body, no interior or top, and someone had put a 5.0 engine it but didn’t hook anything up. My wife and I had to go back down south again to pick up all the boxes of miscellaneous parts.”

Then the coincidence of the situation was revealed. Tab said, “The following day, we were in the backyard having a cup of coffee and I was going through all the boxes of parts like a kid at Christmas. I pulled up a Ziploc baggie that had some nuts and bolts with a note inside saying ‘bolts for drivers door.’ I laughed and told my wife ‘that looks like my writing, and I do that when I am taking cars apart.’ She laughed and said ‘yea, it looks just like your writing. I opened another baggie and there was another note. I told my wife ‘man, that so much looks like my writing!’ and turned the paper over—and it was a note saying ‘good morning my Rooskie, hope you have a great day’ That was the note I wrote my daughter back in 2003, almost 15 years ago! Rooskie was my nickname for my daughter Sumner; I had put the note in her lunch and re-used the piece of paper while labeling parts I removed from the convertible before I had sold it, years earlier. I wrote that note when she was about 11 or 12 years old—she’s 31 now!”

When Tab got the car, someone had painted it red.
The note to his daughter that tied the whole story together.
After stripping the red paint, Tab shot a coat of black sealer primer.

Tab rebuilt the entire car over the next three years, creating a nice restomod convertible with a 302, automatic transmission, and disc brakes that he and his wife joyfully cruise around Lake Havasu. And yes, he added air conditioning but tries not to take it out when the temps are over 110, saying “I did install aftermarket A/C but would have to wear a big sombrero. We will be cruising again once the weather gets a little bit cooler.”

Look closely at the license plate: 66MNT2B. This car and story was just meant to be.