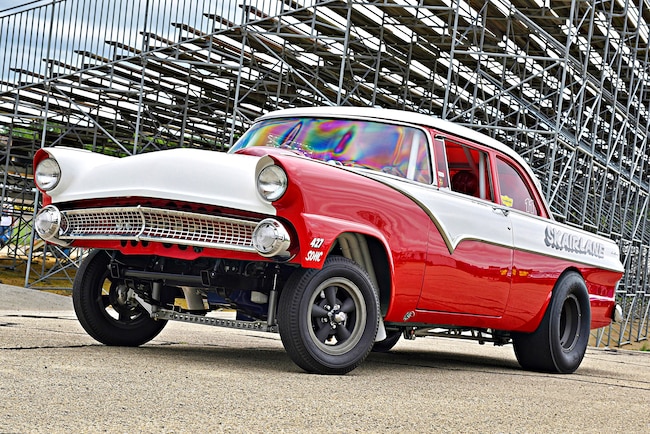 Out of the smoky haze created by the hordes of Chevy tri-five Gasser’s choking-up dragstrips across the country, comes a new and refreshing take on the straight axle form. This stunning jacked-up Fairlane not only dishes out a severe case of eye-candy craving, but also reeks of a “built to be reckoned with” tour-de-force out on the eighth-mile straightaways across the nation.

When owner Jeff Jacobson, decided to build a gasser, he wanted to do something completely out of the box. His journey started when he found this needy 1955 Fairlane for sale by a mutual friend. It had sat for the better part of 15 years before Jeff rescued it, and was a complete car when he pulled it from its dusty lair.

When Ford Fanatic Jeff Jacobson wanted to build himself a gasser, he searched out the perfect starting point for his project. This 1955 Fairlane was available and ready for the taking. It didn't take long for the double-nickel to morph into the track ready straight-axle you see here.

Even after its extended slumber, it didn’t take long before the Fairlane’s Y-block sprang to life, and the feisty Ford hit the streets under the new owners command. Jeff drove the crusty car around for a while before deciding to put his horse-powered plan into action. Game on!

The Fairlane was first stripped down to its shell and prepped for some major surgery. A Ford 1932 straight axle was sourced, drilled, and then used as the start of the front suspension. Out back, a leaf spring suspension was paired with a set of ladder bars made by Jeff’s own fabrication company, Jacobson Speed Shop, and installed to get the stance just right on the gasser.

Jeff didn't skimp when he decided on his powerplant. Actually you can say he went right for the jugular. This fresh "Cammer" SOHC 427 is the stuff dreams are made of for any Blue Oval lover.

Next piece of the puzzle was to source the motor-vation for this here hot rod Ford. Jeff knew that this ride needed one hot engine, a really HOT engine, and by no means did he want to skimp here. He knew he had to go big, or not go at all. So he decided without a doubt that Ford’s SOHC 427 was the way to add some adrenaline to this build. Jeff got to work and soon started assembling the parts needed to get this powerhouse off and running.

Starting with a fresh 427 block, Jeff added a billet Bryant crank, and CP-Carrillo rods, and pistons; the latter personally designed by Ric Panneton himself. Next a Hilborn injection set up was installed to help get this thirsty beast fed the fuel it would need. The assembly of the engine was done by Mike and Matt Faucher at Factory Billet in Lake Zurich, Illinois. The compression here is a hefty 15:1 and this ride runs on VP C14 fuel. This combination made well over 800hp on the dyno. A G-Force 101A 4-speed transmission with a Ram Sintered Iron Clutch was next on the list of must haves, and a Ford 9-inch rearend sends the power out to the back meats.

This rides cockpit is as Spartan as they come. Jeff fabricated the aluminum interior, and fitted the car with an NHRA certified roll cage, knowing what numbers his power to weight ratio would hopefully bring.

The interior is all aluminum to save precious weight, and its styling is as bare bones as they come. Diamond pleat vinyl covers were hand stitched by Mikey’s Kustom Upholstery in Deputy, Indiana. Most importantly, the Fairlane’s cage was custom built and NHRA certified to go 8.5 seconds in the quarter-mile. With Jeff in the seat, this svelte speed demon still weighs in at a paltry 2,450 pounds.

The headers were made in-house at JSS. Body work and paint were done by Jeff at the family owned Brothers Autobody and Repair, which he operates with…you guessed it, his brother Joe. The paint is PPG Deltron with DC4000 clear. The cool retro lettering was done by Jason Vanderwoude at NSD Paintwerks in Griffith Indiana. Wildwood Drag Brakes were installed at the four corners for mucho stopping power. Wheels are American Racing Magnesium; 15x4 up front and 15x10 out back and shod with Firestone skinnies up front and MT 29.5x10.5W meats out back. Building this ride was by no means a one-man show. “99% of the car was built by me and my fellow buddy’s in our car club, the Border Bandits.” Jeff and his wife Amanda campaign the “Skairlane” with the other wild gassers that make up the “South East Gasser Association,” traveling the States and hitting the top eighth-mile tracks. Its best time to date is 5.68 at 122 mph in the eighth-mile. Maybe you’ll be lucky enough to catch it a track near you, and witness this “Cammer” Fairlane outrun the other big dogs in a straight track showdown. 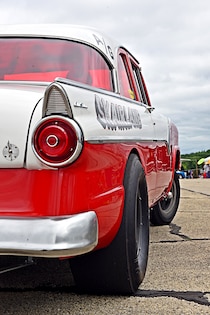 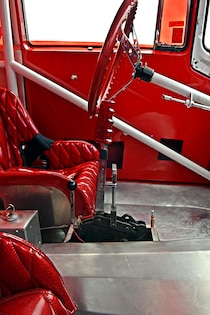 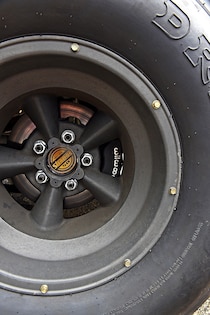