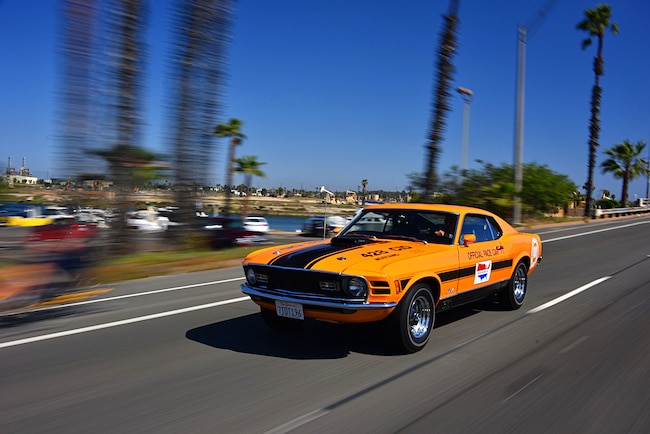 We all have that one moment when we became gearheads. Maybe it was reading car magazines in school. Perhaps you were born into a car family and absorbed the passion from a family member. Or maybe, such as the case with Steve Magee of Irvine, California, you were a “fringe” car guy as a teenager, but there was one car in the neighborhood that fully cemented your feet in the quicksand of car-guy heaven.

The year was 1975 and Steve had graduated high school in Ann Arbor, Michigan, the year prior. He had a 1965 Mustang that was cool, but his neighbor had a 1970 Mach 1 Super Cobra Jet, Grabber Orange with decals and stickers all over it, and Steve fell head over heels for that car. When he realized that the owner was thinking of selling it, Steve had to have the Mustang, saving every nickel and dime to his name until he eventually snatched it up.

The decals that were too far gone to be used were carefully reproduced during the restoration.

The Mach was a special pre-Twister promotional Mustang used as a pace car at Michigan International Speedway (MIS) in 1970 as part of the American Raceway Incorporated (ARI) Pace Car program, and it still had all the stripes, stickers, and “428 CID” painted on the hood, NASCAR-style. His neighbor had originally bought the Mustang from Henderson Ford in Ann Arbor in 1970.

As outlined on TwisterSpecial.com, “In Detroit, Ford’s Special Promotions Division was approached by the President of American Raceway, Inc. (ARI), a close personal friend of “Bunkie” Knudsen, Ford’s president. He requested pace cars for use at five of his existing or planned race tracks. Ten 1970 Mustangs were built. Five Mach 1s and five convertibles. All 10 cars were sent to a special Ford garage in Dearborn where the drivetrains were completely balanced and blueprinted for high speed requirements for pacing NASCAR races. All were equipped with 428 SCJ engines and C6 automatic transmissions. Distinctive side stripes and rear quarter decals having the appropriate track logo were designed. Plans called for color coordination of the tracks and pace cars. Later disaster struck and ARI went bankrupt with only two of the five planned tracks actually built.”

The Holbrook Racing–built 428 Super Cobra Jet now pounds out more than 600 horsepower and 600 lb-ft of torque.
We really dig the NASCAR-style hood graphics showing the world what’s under that Shaker scoop.
The oil cooler mounted to the driver side of the core support is one way to identify this as a Super Cobra Jet.

The ARI cars were built as part of Ford’s Special Promotions work that also built the Twister Specials, but none of the ARI cars were converted into Twister Specials, though they’re “related.” The Twisters were in the 118,000 VIN series, while the 10 ARI pace cars were in the 120,000 series. Without the 1970 Twisters being produced to defray the cost of the ARI project, there never would have been any ARI pace cars produced.

Steve only owned the car for two years when the cost of keeping it running forced him to sell, and he always regretted letting this special car go. He’s certainly not alone in having those feelings for a car that “got away”—we’ve all been there. Then years later, after losing track of the car in the mid-1980s, Gary Petraniac, the president of the Detroit Area Mustang Club, bought the car and contacted Steve wondering if it was used at MIS as a pace car, solidifying the car’s history.

Why mess with perfection; the interior was restored to like-new specs. Fast Fords and Mustangs in Santa Ana, California, did the interior and exterior restoration.
Magnum 500 wheels and Goodyear Polyglas tires are correct for this car.

That sickening feeling of letting the Mustang slip through his grasp was eating at Steve by the 2000s, when the Internet was just getting interesting, so he started searching for the car to see about getting it back. That search took him 15 long years, until late one Friday night he located the Mustang in Indiana. The car had been in storage for almost 20 years and needed a full restoration, but the paint and body were in surprisingly good condition, so Steve sent it off to Steve Steeb Service in Ann Arbor in 2016 where the car was restored. Since the 428 Cobra Jet is not your normal everyday engine, it was sent to Holbrook Racing Engines in Detroit, where famed CJ racer Dave Lyall himself had a hand in building it; when the dyno day was over, the mighty CJ cranked out a healthy 630 hp and 610 lb-ft of torque—quite a bump from the stock 335hp.

In 2016, with the engine installed and all other mechanical work completed, the Mustang was shipped from Steeb’s shop to Magee’s house in California where he then finished the paint and interior work, with some help from Fast Fords and Mustangs in Santa Ana, California. We saw it at the 2018 Knott’s Berry Farm Fabulous Fords Forever show in April, and we were impressed with not only the work performed on the car, but also its history and the fact that the same car Steve owned 40 years ago (as proven by the Marti Report) is back home again in his possession. And that’s a story we can all relate to.

Steve Magee with his Grabber Orange SCJ pace car, 40 years after he first owned it.
The car’s original owner running the Mustang at Milan Dragway near Detroit, Michigan in 1970.