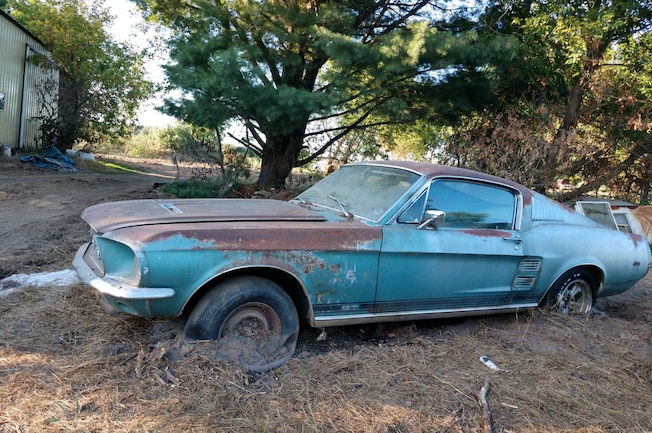 Four years ago, Wayne Kaiser heard about an original-owner 1967 Mustang GT 390 fastback with a four-speed for sale, and being an avid Mustang enthusiast and collector, he was very interested. The trouble is that the guys that had told him about the car were trying to buy it, but were dragging their heels. Finally, Kaiser told them, “Well, if you’re not going to buy it, tell me where it is and let me go over and look at it.”

But they would not divulge the whereabouts of the fastback, so Wayne asked around about the car, with no luck. Apparently, it wasn’t advertised for sale and was in a remote area, possibly on a farm somewhere. Four years later, in July 2018, a friend called Wayne and said he knew of a 1967 GT 390 Mustang for sale, saying, “The guy died last fall, and his wife is selling it.”

The light bulb went on; Kaiser figured this Mustang must be the same one he had heard about four years earlier and had been trying to find ever since. “My friend said, ‘I know where it is and I know the owner. I’ll set up an appointment for you to come over and look at it.’”

Wayne arrived to find a 43,000-mile Mustang that had been parked since the early 1970s, and unfortunately had spent the last 45 years outside. The body looked “rustier than heck,” in his words, attributing the raw appearance to exposure to the elements. Inside, the deluxe seats were in poor condition, but this GT had the upper and lower consoles as well as an in-dash tachometer, and the 390 was still under the hood.

Kaiser learned that the husband, who was a truck driver and a farmer, bought the car brand new and parked it because of a ticking lifter. He said, “[The previous owner] removed the rocker covers and pulled the lifters, out and that’s where it sat. He never moved it since.”

Forty-five years of exposure were hard on the deluxe interior.
The odometer reads 43,578.

Kaiser asked the lady what it would take to buy the car, and she told him the best offer she had so far was $5,000. Knowing that was a low figure, he threw a number at her of $7,500 to see if she would take it, but was prepared to go higher. She accepted right away and Kaiser had just bought himself a 1967 Mustang GT 390 fastback—but the drama wasn’t over. He already could see the floorboards and trunk were rusty, but the wheels were sunk down into the dirt, so he couldn’t see the submerged metal.

“I was expecting it to be a lot rustier than it is.” Fortunately, the quarter-panels were “excellent,” as was the rest of the car.

The week before Wayne bought this fastback, one of the guys that had offered $5,000 for the car came back and cut his asking price to $3,500.