Ballin’ on a Budget 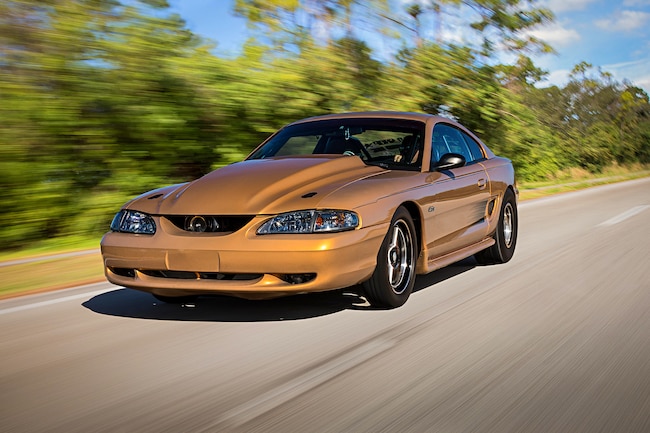 As many competitive racers know, there are many trials and tribulations associated with the sport of drag racing, and sometimes it feels as if the trials are the only things rearing their ugly heads. Mechanical injuries are suffered at the track frequently, but it’s an addiction that puts us right back in the staging lanes ready for more. Although the trials make themselves apparent, even the smallest of tribulations make the blood, sweat, and tears all worthwhile. Fall seven times, stand up eight. That should be the mantra of the sport.

Kurtis Forsberg from Oviedo, Florida, is more than familiar with the triumphs and plagues of the hobby. He owns an Aztec Gold 1997 SN95 Mustang GT that he picked up off Craigslist to be a contender in the NMRA True Street competition. And a contender he built indeed. Kurtis’ True Street monster is capable of an insane 1,320 rwhp and 1,071 lb-ft of torque looking to lock in a 7-second average win in the class. “The car leaves extremely hard and goes straight,” Kurtis tells us.

“The car was built in my two-car garage hoping to one day be a contender in the NMRA True Street class,” Kurtis went on to explain his reasoning behind building his quick street car. “It started off with a 4.6L two-valve with a homemade turbo setup and MS3Pro ECU running E85, and the car went 10.20’s.”

But like anybody building a race car, there’s always the hunger for more power. “In hopes to step up the performance, we built a 4.6L four-valve with a Precision Turbo 8847 with a goal to run 8.90’s. The car went 8.24 at 165 mph,” Kurtis told us about his pass that helped land him in the semi-finals at the 2016 NMRA season opener. Kurtis also took the runner up position in the True Street category at Mod Motor Nationals last year.

Fast forward to this year’s NMRA Spring Break shootout race in Bradenton, the car made a few 8.0-second passes, but was ultimately put on the trailer due to a hurt motor. Kurtis knew something was up with the car, but it still nabbed some quick passes before it called quits for him. “New goal is to run a 7-second average in the True Street class. The car went from running 15-second passes to low 8’s and soon to be mid-to-upper 7-second passes.”

The car is quick, but it’s safe to say that the SN95 Mustang also stands out due to its gold hue. Here’s a little fun fact – Aztec Gold is the rarest factory color on the 1997 Mustang GT with just 1,135 produced. And who knows how many are rolling the streets or strip now 21 years later. Chances are, unless you own one or your neighbor owns one, you probably don’t see an Aztec Gold SN95 that often. “When you go to the track and people ask if you’ve seen the blue Fox-body, people wonder which one, but when they ask if you’ve seen the gold car, everyone knows which one they’re talking about,” Kurtis laughs.

Before Kurtis landed “Gold Dust,” he had built a Fox-body that was near completion. Kurtis sold it after his wife enrolled in nursing school. But once she graduated, the deal was that he would get another car. Searching the Craigslist ads in 2012, this Aztec Gold SN95 Mustang fell right into his lap, and the color has grown on him.

This self-built Aztec Gold SN95 in Forsberg's garage to be a 7-second contender in NMRA's True Street class and boasts 1,320 RWHP and 1,071 lb-ft of torque. After hurting the motor in Bradenton with a 8.0-second pass, the goal is come back better than ever during the World Finals in Bowling Green, Kentucky.

As mentioned before, Kurtis built the car in his two-car garage. It’s the stock 4.6L with .020 over bore, currently to 284ci and fed by a Forced Inductions GT55 88mm hair dryer with a PT2000 liquid-to-air intercooler. The Kellogg crankshaft uses Oliver connecting rods and JE flat-top pistons. Modular Head Shop prepped the CNC-ported aluminum 2003 Cobra cylinder heads. The Modular Head Shop camshafts feature a 107-degree centerline, 0.480/0.480-inch lift and 236/236-degrees duration, and it also features Manley intake and exhaust valves with GT500 rockers and lifters. The machine work was done by the Modular Head Shop and Maximum Machine out of Winter Springs, Florida.

The bottom is sealed with a Moroso oil pan, Overkill oil pump, and oil pump gears. Atop the engine is a shortened intake manifold from a 2001 Cobra, self-built headers, and an Accufab mono-blade throttle-body is tucked under the Kaenen hood. Working with a Holley Dominator, Kurtis tuned everything himself to run smoothly.

“I even built the homemade transmission cooler. The whole car from start to finish was built in the garage. We build our own motors, rearends, chassis, and just about anything needed. It’s kind of our thing,” Kurtis explained.

Shifting is done by a Reid-cased FTI Powerglide transmission, Reid flywheel, Precision air shifter, and FTI 9-inch converter with a self-built water cooler. The power is then sent out back by a PST 4-inch aluminum driveshaft to the 8.8 rearend packed with 3.73 gears and Strange 35-spline axles. It still retains the factory black interior, but it is outfitted with a self-built and NHRA 8.50-certified roll cage to keep Kurtis safe.

Self-built in Forsberg's two-car garage, this 4.6L is fed by a Forced Inductions GT55 88mm turbo with all of the supporting components.

“At the moment we are doing the 25.5 update on the chassis, and that’s pretty much it for now. We have yet to really see what it’s capable of. It’s made a ton of power on the dyno but we haven’t really been able to put it down at the track for a variety of reasons. I think once we get the cage up to snuff, she’s going to be good for a while,” Kurtis said.

Launch antics are controlled with TRZ valved AFCO double adjustable rear shocks and TRZ valved Strange struts. His wheels of choice are 17-inch Weld AlumaStar’s up front and 15-inch Champion wheels on the rear, which are wrapped with Mickey Thompson ET Street Radial Pro’s. Baer brakes all around help bring the ride to a halt.

The interior features a 10-point roll cage built by Forsberg, and he is currently in the process of getting the cage up to snuff for the journey into the 7-second zone.

“The car shows what you can do with a lot of hard work while still having a real world budget,” Kurtis explained. “We hope to run mid-7s with it. I don’t have an exact number goal. When we originally built the car with the last motor I thought we were really going to have to ring the guts out of it to really to squeeze out some 8.90s. That was our goal back then, but it flew on the old motor; I think we went 8.20’s with it and it kind of surprised a lot of us.”

“There are a handful of folks that have helped me out and I wouldn’t be able to run at this caliber without that help,” Kurtis explained. A big thank you goes out to Modular Head Shop, All American Crating, TRZ Motorsports, FTI Transmissions, KWS Images, Roy Cole, and all his family and friends that have also supported him through the whole adventure.