Master Builder From houses to powerhouses: Mike Devorak built a badass Pro Street Mustang over the course of 26 years 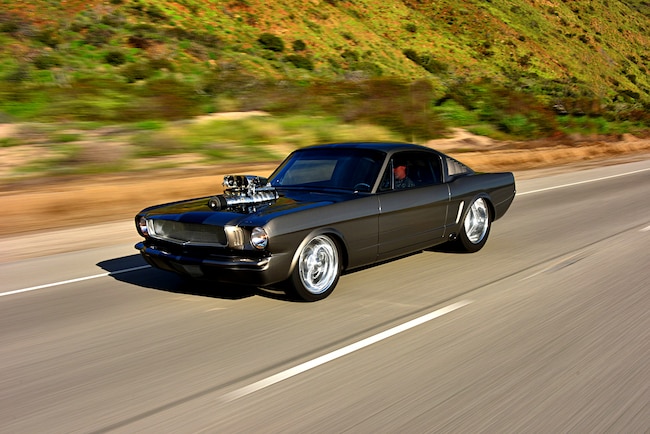 It’s generally agreed upon that we’re all born with our own unique, innate set of traits and abilities—those inherent mental or physical attributes that help shape our lives and determine our varied contributions to the world around us. One such inborn talent—one that your author sadly lacks—reveals itself as a natural knack for building stuff. Stuff like houses. Or cars. Or maybe both.

Mike Devorak is a Californian who makes his living as a general contractor, having spent most of his working life custom-crafting new homes from the ground up. He seemed to come by that complicated woodworking skill quite naturally. But he’s also one of those gifted hobbyists capable of carrying out a project car build from start to finish, as proven by this Pro Street-ish 1966 Mustang 2+2 that, aside from upholstery, transmission, and paint, is basically a product of his own two hands (with the frequent help of his brother, Rick). Without any prior formal automotive training or professional experience to prepare Mike for the task, he simply cast off any doubts and got down to it.

Despite looking like something out of a ’60s rail dragster, Mike reports that the skyscraping Windsor is right at home on the street, capable of sending around 700 horses downstream through a C6 auto and Gear Vendors overdrive. The latter helps normalize the Mustang’s 5.40:1 axle ratio.

And he persevered, because the build took a while to complete—about 26 years, a span that Mike says included moving between no less than fifteen different residences and raising five sons. He simply labored away on the project “at his leisure” as time and finances permitted, learning as he went.

It began in 1981 when 16-year-old Mike bought a worn but solid fastback from his dad for the princely sum of $2,600 (paid over nine monthly installments). When we asked about its original powertrain, Mike somewhat sheepishly admitted that this Mustang had been a factory 289 Hi-Po with four-speed. If he’d known then what he knows now, he might not have been so quick to pretty much tear it down to a bare Unibody just a couple years later to begin its “many modifications.”

Many indeed—ultimately based around an Art Morrison 2x3 tube chassis, further stiffened with a 10-point cage. Adapting a Mustang’s Unibody to such a full perimeter frame required Mike to learn the diverse metalworking/fabricating/welding skills necessary to shape and fit a new aluminum floorpan, tranny tunnel, as well as the roomy rear tubs required to eventually house gargantuan 20x18 Billet Specialties wheels and Mickey Thompson 31x18R20 rubber. A radically shortened 9-inch housing is filled with a Mark Williams centersection, Detroit Locker, and Moser 35-spline axles tucked in between, located by a four-link setup. Up front, things pivot on tubular upper and lower A-arms from Scott’s Hotrods, while steering is by way of a Flaming River rack-and-pinion.

You don’t build a chassis like that and then go all limp-wristed under the hood. Around 2005, Mike turned to Ford Racing for a short-block assembly that now displaces 418 cubes. Built together with his friend Matt Baldanado, the bored and stroked Windsor is probably nearly double its original height, thanks to a beer keg–sized Mooneyham 6-71 blower and BDS EFI, complete with bugcatcher. Despite looking full-race, Mike assures us the 700-ish horsepower mill is quite streetable, thanks in part to a sane hydraulic roller cam and a Gear Vendors overdrive tucked between the car’s C6 automatic and its truck-ish 5.40:1 ring-and-pinion (the effect of which is also tamed by those tall rear skins).

Sheltered by a 10-point cage, the interior centers around Pro Car buckets on either side of a custom console that face Mike’s own alloy instrument panel fitted with Auto Meter Phantom gauges and a central ICE/GPS head unit.

While all this motivational hardware screams “competition,” much of the quarter-century build time can be attributed to painstakingly sweating the (tasteful) details on the fastback’s exterior and interior. Among the body’s many tweaks are welded-in front and rear valances and rocker panels, a completely reworked front clip, stretched wheelwells, a cut-and-tucked front bumper, LED taillights, and shaved roof rails and door handles. Crafting the reverse-hinged hood with its homemade guides and hinges and its massive, precisely shaped and flanged cutout to clear the supercharger superstructure added untold hours to the project. Yet, all this body surgery came together without losing the original lines and character of a ’66 2+2.

Of course, the same can’t be said about the cockpit, where you’ll find no resemblance whatsoever to its factory origins. After doing all the cabin tinwork—including carving out that nicely detailed aluminum instrument panel—Mike eventually assigned upholstery duty to JB Custom Interiors in Camarillo, California, where yards of Mercedes-sourced leather were cut and stitched into place throughout.

Likewise, final body prep and paint were outsourced to the pros at Palmer’s Custom Paint & Body in Moorpark, California, where that understated combo of Mineral Grey with black stripes was shot over everything, including the bumpers.

Not long after completion, an audio company rep spotted Mike’s ride, and soon it was front and center in that company’s 2009 SEMA Show booth. Since then, it’s been shown a few times, but primarily serves in a weekend cruiser role, whenever Mike gets time away from framing and contracting house builds. Having determined that he likes working with metal at least as much as wood, Mike seems itchy to start another automotive project soon. For his sake, and ours, we hope that one won’t take another quarter-century to complete.