Separated at birth and at one point owned by the same person, these 1968½ Cobra Jets are finally together again 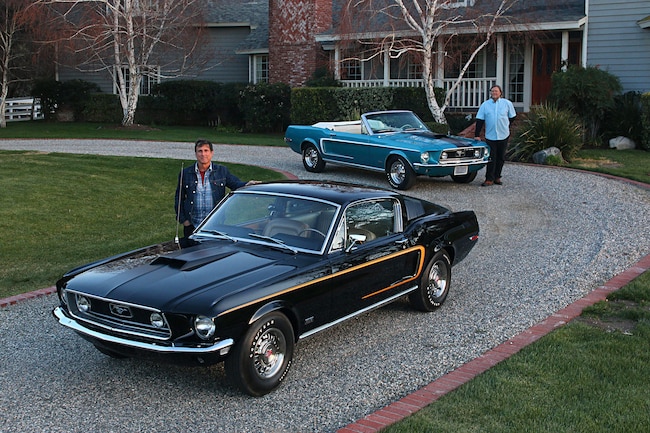 Kenn Funk was a Mopar fan early on in his automotive life, having a 1969 Plymouth Road Runner that “got away from me” in terms of going overboard with modifications. But then he saw a 1968½ Cobra Jet Mustang in a few magazines and instantly coveted one. He said, “I discovered the ’68½ Cobra Jet and went crazy. I think they’re the greatest Mustangs—the idea, the whole story behind them. I started including Fords in my mind as something I liked, but all of my cars were Mopars at the time.”

After some searching, Funk’s first Cobra Jet was a 1968½ blue/blue fastback that he had restored. Then he got the urge for a Cobra Jet convertible, found one in the Los Angeles Times (this was before the days of the Internet and easy car searches), and went to look at it.

Funk said, “I had bought a red K-code convertible from a local dealer, and while it looked great and my wife and family loved the car, it wasn’t right. It had a made-up door tag, no paperwork, that kind of thing. I was going through my learning phase with Mustangs.”

The Gulfstream Aqua Cobra Jet convertible now resides in the Los Angeles area, owned by Jeff Lotman.
The mighty 428 Cobra Jet that set the world on fire in 1968.
The convertible was built on April 3, 1968, and is unique for several reasons, one of them being the air cleaner housing—the entire assembly is painted Ford Corporate Blue, whereas later on the top flapper piece was painted black, such as on the fastback that was built on July 11 of that year.

Not happy with the build of his “K-code” Mustang and desiring a Cobra Jet convertible instead, Funk drove the red car to see the CJ convertible and didn’t care what color it was—he just knew he wanted a Cobra Jet convertible. “There it sat, in boxes spread all over the place and one quarter-panel was off the car. You have to be a real car guy to appreciate what it looked like.” It turned out that the owner had sent it to a local restorer, but when the checks stopped coming for the work, the restorer sent it back to him with a bill, prompting the owner to sell the car and recoup his losses.

After some negotiating, Funk traded the red convertible for the CJ project and was ecstatic. “I was so happy to get rid of that red car, but my wife thought I had lost my mind. I left with a beautiful red convertible and brought this heap back home in boxes.” With a lot of work necessary on the car and not enough time to do it, Funk pushed the car into his shop, where it sat for years.

Around this time he saw a Cobra Jet in a magazine that was Raven Black, and his CJ obsession demanded he now have a black version. Still in the days before the Internet, the place to find a collectible car was Hemmings Motor News, and it was in those pages that he found what was advertised as a Raven Black 1968½ Cobra Jet fastback, located in the backwoods of Louisiana. He bought it sight unseen, after being assured that the car was originally Raven Black from the factory and not a repaint, and had it shipped to his shop in Southern California.

Funk said, “It rolled off the truck and all I did was open the driver’s door and look for the color code “A” on the door tag. You never know…was it black from day one?” Thankfully the A code was there, signifying that he now owned a Raven Black Cobra Jet Mustang. A gold C-stripe down the side of the car matched with a Gold Nugget interior really made for a striking Mustang, even in unrestored and semi-rough form. It would soon look much better.

Unfortunately, the car’s restoration would take nearly two decades. The CJ was pushed to the back of Funk’s shop, with the original four-speed in the trunk, but no engine. The car had originally been ordered by a Ford dealer’s son, equipped with the 428CJ, four-speed, power nothing except front disc brakes, and the steep 4.30:1 gear option. Funk said, “No power steering, 428CJ, 4.30 gears, four-speed—you know why the car was ordered.”

Black with gold C-stripe, Cobra Jet engine, four-speed, and 4.30:1 gears—what do you think this car’s intended purpose was when ordered new?
The 428 Cobra Jet breathes through a vacuum-actuated blade in the air cleaner and hoodscoop that still has the factory markings on the underside.

The original owner did indeed race the car—a lot—and eventually sold it to the second owner, who bought the car after being beaten by it numerous times. It is believed that the second owner, who continued the car’s racing life, at some point along the way blew the engine up (no doubt in a race) and the car sat in a barn for a long time—that’s when Funk found and purchased the Cobra Jet. After unloading the car from the truck, Funk pushed it in the shop, the same building that the CJ convertible was in.

At some point, he had collected a white 1969 Boss 429, and when he decided to sell it he met John Rosengrant, who came to look at and eventually buy the Boss-9. During the deal, Rosengrant saw the black CJ in the shop and was intrigued. Meanwhile, Jim Ellsworth in Ohio was restoring the convertible, which was the only 1968½ Cobra Jet convertible (34 convertibles total were built) in Gulfstream Aqua. Funk said, “It was coming along so well that I sent him the black car too, loading it on the trailer and driving it to Ohio to Ellsworth’s shop.”

Always with a passion for more cars, Funk sold the convertible to a friend before the restoration was even completed, saying, “It was finished in time for the Tulsa [Oklahoma] Mustang show and went straight there from Ellsworth’s shop. It never came home with me.” The convertible’s original owner was a woman from Chicago who taught in a college in Oklahoma, and she sold it to a college student who found it for sale in the college newspaper. This second owner learned that the car was restored and came to the Tulsa show to see it, bringing his wife along and taking pictures with the car. Eventually, a wealthy owner in Los Angeles called Kevin Marti at Marti Auto Works looking for “a great, great Mustang” to add to his collection, and Marti told him about the Gulfstream Aqua convertible that he knew Funk had had restored. A deal was struck to bring the car back to California—not in Funk’s possession, but at least he’s in the same town as the car now.

Like the convertible’s color combination, the fastback CJ’s black and gold color scheme is stunning. Pictures don’t do it justice.

Around the same time, Rosengrant and Funk had become friends, and after talking about it several times, Rosengrant convinced Funk to sell him the Raven Black car, which was about two-thirds of the way through the restoration at Ellsworth’s shop. Funk never got a chance to drive this car either, and when it came off the trailer he said Rosengrant’s jaw fell open and silence reigned. “This car—you can picture it; black with gold interior, gold C-stripe, it’s so stunningly unbelievable. It’s better from the back. You have a vision in your head, but it’s more spectacular in person.”

Rosengrant went on to say, “You never saw black cars in the 1960s. Most were hippy colors like purple, orange, red, that kind of thing. My Cougar was Lime Gold and lots of Mustangs were in that color too. Black just wasn’t popular, but it’s a sleeper ‘street racing color,’ and with this car’s options [or lack thereof] that’s exactly what it was. I think the color also might have something to do with where it was ordered—New Orleans. I’ve wondered if the black and gold paint was chosen because the Saints became a football team in 1967.”