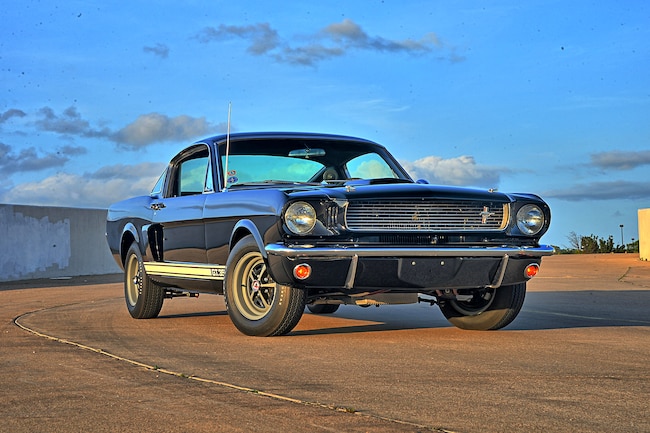 What’s black and not a Hertz in a 1966 Shelby G.T. 350? The answer is something very, very rare, like the Mustang seen here; it’s owned by Jim Wicks, the founder and coordinator of the Mid-America Ford & Shelby Nationals, held each June in Tulsa, Oklahoma. Compounding the rarity of the color are two more super-rare features: stripe-delete and a Detroit Locker rear axle. Was this car built for the track?

Wicks has not uncovered any track history, but the salesman at Larsen Ford in White Plains, New York, who ordered the Shelby for the original buyer was a famous East Coast drag racer named Bill Kolb. Car 6S1063, produced about midway in the 1966 production run, turned out to be (per Wicks’ research) the first ’66 Shelby built with a Detroit Locker and the second non-Hertz black Shelby.

How rare is a black, non-Hertz 1966 Shelby G.T.350? Per Howard Pardee of SAAC, 33 were built.
Wheels are Magnum 500s and painted magnesium gray, not chrome-plated.

Wicks figures it took a savvy customer to say, “Wait a minute. They’re building black cars for Hertz; why can’t I buy a regular G.T. 350 in black?” Black has long been a great color for a sports car. Per Howard Pardee at SAAC, non-Hertz G.T.350s painted black totaled just 33 units for 1966.

Every G.T. 350 came with a solid lifter, high-winding 289 Hi-Po small-block, rated at 306 horsepower. Instead of an automatic, this build came with the optional BorgWarner T-10 four-speed manual transmission. Head-snapping launches would almost be the norm for everyday driving. With so much sting there was not so much need for bling. Maybe that’s why this car came stripe-delete without the Le Mans stripes on hood, roof, and rear decklid.

The 289 High Performance engine was rated at 306 horsepower after Shelby finished with it. A Monte Carlo bar connects shock towers together to add strength to the Unibody.
The interior has full instrumentation and a wood-rimmed steering wheel, and the seatbelts are “quick-release,” the same ones used in Shelby’s 289 Cobra. Carroll Shelby also signed the glovebox door and added “#1063” for the car’s Shelby number.

Of course, the rest of the Shelby extras are on this car. Rocker panel side stripes incorporate the G.T. 350 logo and make this Raven Black beauty stand out from a normal Mustang fastback, as do Plexiglas rear quarter-windows, a fiberglass hoodscoop, gas cap with G.T. 350 logo, and G.T. 350 plate on the rear decklid. A close look reveals another trick feature to the 14x6 Magnum 500 wheels. Instead of chrome plating, the popular wheels are painted a magnesium gray for less bling.

Less bling and more sting is this car’s theme, creating a 1966 Shelby G.T. 350 Mustang unlike any other.

Jim Wicks got an original handwritten sales invoice with this car, along with the original registration and a complete history of the chain of owners.
Wicks finished the restoration, started by the previous owner, with help from John Brown and Randy Roberts.
A fiberglass scoop on the hood ducts air to the carburetor.
Plexiglas side windows are unique to the 1966 Shelby.